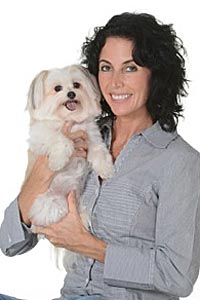 A few years ago, Florida resident Michele Lazarow learned about an issue that would change the course of her life. Vaguely aware of the connection between puppy mills and pet stores, she asked a local pet store employee if the store’s puppies came from puppy mills. “No,” she was told, they didn’t come from puppy mills, but from a USDA-licensed breeder. “Large-scale commercial breeding operations where profit is valued over the animals’ health and welfare is a puppy mill,” says Michele. “They were telling me the dogs weren’t from puppy mills, but, in fact, that was exactly where they were from.”

Michele did some investigating and found that Albuquerque had enacted an ordinance that banned pet sales, unless the pets were from local shelters. More research revealed a lot of information regarding the topic on the Best Friends puppy mill initiatives resource page. That’s how Michele started a campaign to get Hallandale Beach, Florida, to pass an ordinance banning the retail sale of pets. It was more difficult than she anticipated

“It’s a no-brainer, so why wouldn’t it pass?” says Michele. “Even one store selling puppies is a plague on any community. As a resident, I couldn’t rationalize why our local government wouldn’t support the ordinance.”

It took more than 15 months to get an ordinance in place, but inspired by the success, Michele clearly was on a path to do bigger things throughout the state. She became a candidate for commissioner in Hallandale Beach and won the election. 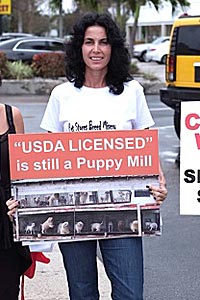 Today, Commissioner Michele Lazarow is behind many of the pet sale bans that are being implemented in Florida communities. One of her most compelling arguments against puppy mill-supplied pet stores is reflected in a question she asks lawmakers: “How many sick dogs are OK to come out of one store?” Many of the puppies purchased in pet stores end up sick as a consequence of poor conditions in mills, making it a consumer protection issue.

Elizabeth Oreck, national manager of the Best Friends puppy mill initiatives, helped guide Michele about which pet sale ban strategy has worked in cities around the country, including large communities like Los Angeles and Chicago. “Elizabeth reinforced that we don’t want to close pet stores or see anyone lose their business,” says Michele. “We want them to switch to a more humane model.”

Best Friends supports local campaigns by informing lawmakers about the issues and about why they matter to every community. “We are proud to support Michele’s work. She’s working effectively behind the scenes and at the forefront,” says Elizabeth. “By systematically going city by city and county by county, she’s capitalizing on the progressive results of neighboring communities.”  Elizabeth adds that you don’t have to be a pet lover to embrace the ordinance. “It protects consumers who think they’re buying a quality pet, and it helps taxpayers because it costs money to run animal control agencies. Pet stores not only compete with them, but add to their problem.”

The collaboration between Michele and Elizabeth has yielded impressive results. So far, 21 pet sale bans have passed in Florida and as a result, it’s no longer easy for Florida pet stores to mislead customers about where they get their puppies. This success is largely due to Michele’s tireless work across the state, along with voters taking action.

“Every constituent’s voice matters when it comes to animals in need,” says Elizabeth. In Florida, the masses have spoken. They don’t want what puppy mills are selling.