Physical therapy and play therapy for kitten with leg problem

Image
Kitten rescued from under dumpster has a problem with her back legs and can't walk. With physical therapy and play, she is making great improvements.
By David Dickson

When Rio the kitten was found under a dumpster, her rescuer feared the worst. Rio was unable to use her back legs at all. The woman rushed Rio, along with Rio’s sister Lotus (who had no apparent physical problems), to Best Friends for medical care. 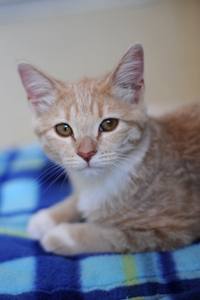 Vets examined Rio yet couldn’t tell immediately what the problem was with those back legs of hers. X-rays didn’t reveal any broken bones, and there was no obvious sign of injury or damage. Rio’s problems could have come from some sort of trauma, or they could have been congenital. Nobody knew for sure. They only knew Rio was one adorable, spunky kitten who deserved the best possible care no matter what. She and Lotus were accepted at the Sanctuary.

The caregivers in Rio’s new play area consulted with the Best Friends vets and devised a plan to try out some physical therapy. The theory was if Rio’s problems were congenital (i.e., if she was born this way), then the physical therapy most likely wouldn’t do any good. If, however, she had experienced some type of physical trauma, then therapy might make a huge difference. Either way, physical therapy certainly wouldn’t hurt. The main goal was to try and get some strength in those legs, if possible.

"At first I just held my hand lightly under her belly and supported her a little bit," explains cat caregiver Jean Morris. Other caregivers did the same. You see, Rio wasn’t using her back legs at all in the beginning. She’d simply scoot around to get where she needed to go. By supporting her in an upright position this way, caregivers helped Rio put a little weight on those back legs. Their hope was that this technique might strengthen Rio’s muscles a bit at a time.

It didn’t take long to see signs that the physical therapy was working! "Within a few days, she would stand up to eat," explains caregiver Susan Richmond. Obviously there was light at the end of the tunnel, a whole bunch of it! 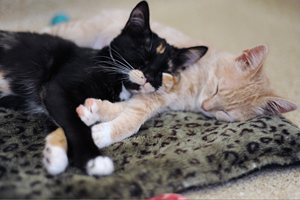 Caregivers continued with the physical therapy. In a few more days, Rio began to walk on her own, wobbling as she went in an adorable stride that made everybody grin ear to ear. To be clear, Rio does not have any neurological problems (such as cerebellar hypoplasia). Best guess at this point is Rio did indeed experience some sort of traumatic event or other because she’s been able to improve. She is on the mend, and doing all she can to get even better.

As for the physical therapy, caregivers no longer need to support Rio’s body weight. Instead, they do all they can to encourage her to get up and move around as much as possible. And how do they accomplish this? With the best possible therapy for a kitten, of course. Playtime! "She loves to play," says Susan. "Every day she seems to be getting better and better."

Caregivers will wave a toy wand in front of Rio, or involve her with any number of other fun games and activities. Anything they can do to keep her up and zipping around the room. They even placed a three-tiered climbing tower in her play area, which Rio adores! She climbs to the top and leaps off with typical reckless kitten abandon. Her back legs sort of squish upon landing, but it doesn’t hurt her and it’s keeping her moving. "She’s a little trooper," adds Jean. 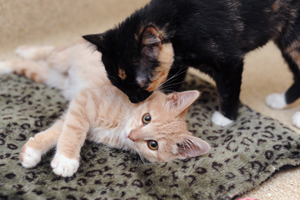 Lotus and Rio are the best of friends.

And then there’s another highly effective physical therapy tool in the form of her sister, Lotus. Rio and Lotus share a room, and the two of them have been close since day one. They play together all the time.

Rio continues to have a wobble in her walk. "Her back end is still weak," explains Jean, "but she’s come a long way." In the weeks and months to come, nobody is certain how strong those back legs might get, or if she’ll always have some swagger in her stride. No matter the outcome, however, she’ll receive as much TLC, medical attention and playtime as she needs, along with a whole sanctuary of well wishes being sent her way on a daily basis. Rio is made of mighty tough stuff; that much is obvious. Between her pure grit and the army of supporters lining up behind her, this kitten is bound for big things one way or another!

Read about playtime ideas for kittens and cats.