Pig has surgery to repair a ruptured disc in her back

Image
Pig with ruptured disc in her back has surgery (hemilaminectomy) at the Ohio State University. She's recovering and has regained some mobility.
By Christelle L. Del Prete

Best Friends volunteers Brian Walsh and Danielle Hundley weren’t planning to adopt Joanna. Malnourished as a piglet and sold as a “teacup” pig (there is no such thing), Joanna came to Best Friends Animal Sanctuary because life as an only pig – and an indoor one – had made her destructive and antisocial. In Marshall’s Piggy Paradise, she quickly earned a reputation for being more naughty than nice to caregivers and volunteers. Despite that, she found a home with Brian and Danielle. What happened next could have been tragic. Instead, Joanna’s doting new family and a dedicated veterinary team at the Ohio State University (OSU) Veterinary Medical Center made it fantastic.

Falling in love with a feisty pig

When Danielle and Brian met Joanna, they didn’t fall in love with her at first sight. They were, however, quite smitten with Buster and Malcom, two other pigs at the Sanctuary. But feisty Joanna was quite attached to Buster. So they decided to take her too, willing to give her a good home, even though she might not have been their first choice.

Brian and Danielle’s five-acre farm in Cincinnati has long been home to rescued dogs, cats, horses and chickens. So, after their visit, and armed with expert advice from Best Friends staff, Brian and Danielle returned home to set up their version of Piggy Paradise. Then they hitched up their horse trailer and drove west to meet volunteers who transported the pigs halfway.

At home on the farm, Malcom, Buster and Joanna (re-dubbed JoJo) settled in happily. “I've never seen pigs run and gallop the way they did when they first came there,” Brian says. “Especially JoJo.” Brian and Danielle found JoJo easy to get along with, despite her reputation. They fell hard for the feisty pig.

Surgery for pig with ruptured disc in her back 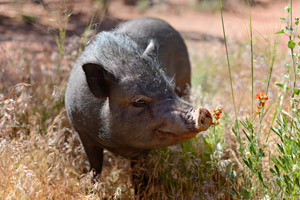 For a month, all was well. Then, one day at feeding time, disaster struck. JoJo, instead of running up for her dinner, lay on the ground, unable to move her back legs. Danielle and Brian immediately called a local vet, and the very next morning, drove two and half hours to the renowned veterinary hospital at their alma mater, OSU.

JoJo’s injury (a ruptured disc in her back) is quite common in dogs. But the surgery to repair it (a hemilaminectomy) had never before been done on a pig. The team, led by Dr. Caroline Lodge, predicted that JoJo would have a 50-50 chance of regaining mobility after the groundbreaking surgery. Brian and Danielle thought she deserved that chance.

In the weeks following the surgery, Brian and Danielle drove up to OSU to see JoJo every other day. They also ordered her a customized dog wheelchair, and, only a week after her injury, the veterinary team had her strapped into the cart. JoJo was ready to roll. After two weeks, she was back home.

JoJo’s prognosis is guarded; no one knows, at this point, when or if she’ll walk again on her own. And, as one might imagine, caring for a special-needs pig isn’t always easy. For starters, there is extra clean-up work to do, and JoJo can be a bit ornery in the morning. She squeals loudly in complaint until she gets settled in her cart, gets mobile, and gets her breakfast.

There is, however, plenty to be positive about. In addition to some financial assistance from Best Friends, donations are coming in through the GoFundMe page that Danielle set up to help with the cost of JoJo’s surgery. But best of all is the fact that JoJo, despite a bit of fuss here and there, is happy. A recent checkup at OSU revealed that she’s regained some mobility in her limbs. And one thing is clear: Whether or not she walks again soon, or at all, JoJo is on a roll.