A pig walked into a bar

Image
After losing his home where he was overfed, pig comes to Best Friends where he has reached a healthy weight with diet and exercise.
By Christelle L. Del Prete 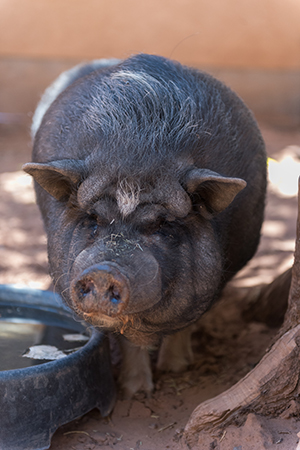 If Wilbur could talk, he’d have an interesting story to tell. About seven years ago when he was still a piglet, he was abandoned in a rather strange place for a pig — a bar. Perhaps his person just didn’t know how to take care of a pig or how to find him a safe place.

Luckily, someone came along, fell in love with him and brought him home. Sadly, that arrangement ended years later when his new family moved and couldn’t bring him along. But this time, Wilbur found himself in a perfect place for a pig — Marshall’s Piggy Paradise.

Wilbur had some work to do when he came to Best Friends Animal Society last May. After being loved on and spoiled with too many treats in his former life, he was carrying quite a bit of extra weight. Coming to the Sanctuary meant a big lifestyle shift and a pig diet.

Overweight pig gets a lifestyle change

Though he’d been loved by his family, Wilbur never had the chance to be around other pigs. Overfed by his many admirers, he’d never experienced the joy of rooting around for fresh fruits and veggies in a big outdoor enclosure. And, at about 25 pounds over his ideal weight, he certainly didn’t look like he’d ever gotten enough exercise. All of that was about to change.

Caregivers began working with him right away. But Wilbur was skeptical at first. His diet was limited to controlled portions of foods that were healthy and good for pigs. And his caregivers started encouraging him to be more active. What was going on? Wilbur didn’t know and he didn’t like it. He retreated to his piggy igloo and sometimes refused to come out.

Soon, however, he met his match in administrative assistant Amy Thatcher. She made it her mission to win him over. She began inviting him to hang out in her office a few days a week. On those days, she took him outside for walks during her breaks.

These were baby steps for Wilbur, but soon he began looking forward to the routine and becoming more willing to venture out with his new friend. Amy began taking him for slightly longer walks until Wilbur could easily make it from her office at Marshall’s Piggy Paradise to the Best Friends Welcome Center and back. That was a big achievement, because while the welcome center is only about a quarter of a mile from where he lives, it was a long walk for Wilbur. 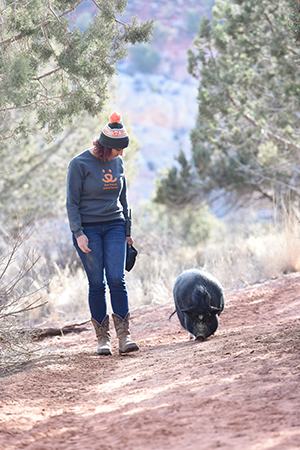 Happiness for a pig losing weight

Amy also started doing some target stick training with Wilbur. Learning to touch his nose to a ball on the end of a target stick and to follow it is great enrichment for pigs. It also helped motivate him to move around and get into the exercise groove.

Wilbur’s had regular weigh-ins at the on-site clinic in Marshall’s Piggy Paradise, and at each one his progress was impressive. First, he lost a pound. Then it was five pounds and then 10 pounds. Now, about six months after beginning his exercise program, Wilbur has lost 23 pounds and is at a healthy pig weight.

Wilbur has a new, slimmer figure now, but best of all, he has a new lease on life. He no longer parks himself in his house, refusing to come out. He roams and roots around in the large piggy park at Marshall’s Piggy Paradise. He fits in with the pig community here and hangs out with his piggy friends. And going for walks is now the highlight of his day rather than a chore. 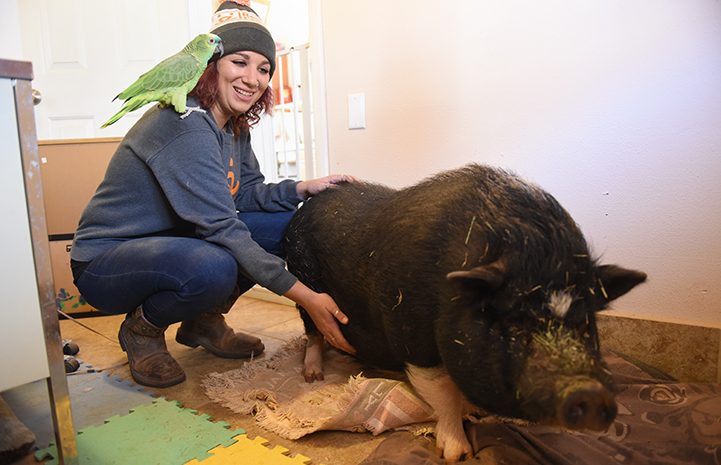