Pit bull terrier blossoms after being rescued from fighting ring

Image
Pit bull blossoms after being rescued from a fighting ring. She has been adopted and gets along with other dogs and cats.
By Christelle L. Del Prete 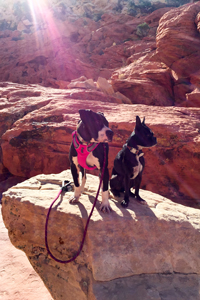 Sometimes, dogs rescued from fighting rings can take months or years to learn to trust people and feel comfortable around them. Many of the Vicktory dogs (the 22 dogs who came to Best Friends from the Michael Vick dogfighting case), for example, came to Best Friends Animal Sanctuary extremely fearful and shut down. It can take a long time to begin to earn an abused dog’s trust. But Sorento was different.

Rescued during a dogfighting bust, Sorento the pit bull terrier came to the Sanctuary from a shelter in Florida, and immediately took to her caregivers. “Sorento loves people,” says Dogtown caregiver Kayla Sedbrook, “and is super cuddly and eager to please.” At only a year old, she is a fun, playful girl, too — still a pup despite her difficult beginning. She loves chew bones and rope toys, and, at the Sanctuary, would happily tote them around her yard.

She would get extremely uncomfortable, though, if she saw other dogs through her gate or while she was on a leash. So Dogtown caregivers found her the perfect roommate — a tolerant dog named Sam Houston. With Sam’s help, Sorento got accustomed to being around other dogs, and started having play dates. And that helped her find the perfect home.

This past October, Brock Rumer and his girlfriend, Kim Serafin, visited the Sanctuary and spent four days volunteering in various animal areas. But the couple spent the most time in Dogtown, where they met Sorento.

Pit bull who gets along with other dogs and cats 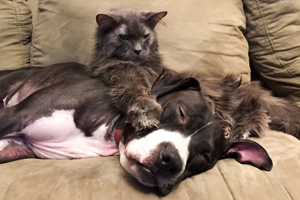 “I wasn't looking for another dog … until I met her,” Brock says. “There was just something about her. I took her for a walk, sat on a bench along the trail and petted her. She put her head in my hand.” It seemed pretty clear that Sorento had found her forever person. However, there were a few minor details to work out first. Brock and Kim have cats at home, as well as a Boston terrier named Bruce.

Best Friends staff members introduced Sorento to a calm, dog-savvy Sanctuary cat to make sure she was OK with cats (a test she passed with flying colors). Next, they introduced her to Bruce, the family’s Boston terrier, and after the two seemed to hit it off, Sorento headed home. Within an hour of her arrival, she was contentedly curled up on the couch with Brock and Kim’s cats. Now renamed Margot, she’s learning the ropes of being a beloved pet. “She’s new to being in a home,” Brock explains. “She (has) a lot of puppy energy, and a lot to learn, which is fun.”

Margot is having fun, too. When she’s not cuddling with the cats or cozying up to Bruce, she’s going on lots of adventures — including a street fair in Las Vegas, a hike at Lake Mead and trips to the park.

At home, Margot is working on her basic training and other things that Brock says “help her understand and explore her world.” And, on top of it all, she’s helping to change perceptions of pit bull terriers. “She loves people so much and thinks everyone is her best friend,” Brock says.

Although Brock wasn’t expecting it, Margot has made him appreciate the work Best Friends and other organizations are doing on behalf of pit bull terriers across the country, especially those rescued from fight busts.

Without this work, he says, “Margot probably would have been destroyed, denying the world a really awesome dog.”

To help more animals like Margot go from homeless to home, become a Best Friends member.