Plucked from peril to sitting pretty

Image
A group of cats at great risk find the help they need at Best Friends.
By Liz Finch

Nine cats come tumbling and leaping at me when I open the door to the small building they’ve called home for the past two months. The room literally reverberates with their combined purring. Sweet little calico Celeste climbs my leg, while madman Corona careens from one end of the room to the other, engaging various cats in brief bouts of wrestling as he goes.

I’m thrilled to see that they continue to be such happy, well-adjusted cats. I’m even more pleased to see that their patches of ringworm are finally almost gone, and there is only the very occasional sneeze. That’s a huge difference compared with how they looked when they came to Best Friends this past August. 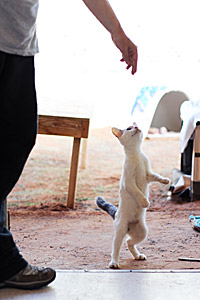 There are only nine of the cats now living at the Sanctuary. Originally there were 23, almost all of whom suffered with mild to severe upper respiratory infections and a particularly resilient strain of ringworm. Over half of them have since been deemed healthy enough to move on to the official catteries. By the looks of things, the remaining guys won’t be far behind.

It’s definitely a happy resolution to a situation that didn’t start out looking so rosy. The cats were living outside in a town not far from the Sanctuary, cared for by a woman who suddenly faced eviction from the property. She was unable to take any of the cats with her to her new home, and she feared what would happen to them when she left.

"We've dealt with previous reports of cruelty in this community, and we wanted to find a way to save these lives," says cat initiatives coordinator Janice Dankert. In fact, one of the cats from this group arrived with a recent injury on his side and a broken pelvis. He had been plucked off the road by a group of children and brought to the woman just days before she was forced to move.

“This is admittedly an unusual situation,” says Michelle Warfle, manager of Cat World. “We rarely can accommodate so many cats at once, but this was in our backyard, and the cats were actually in danger. We wanted to be able to help.”

Coming together to help cats in need

Still, wanting to help and having a place to put the cats were two different things. So Janice reached out to the entire staff of Best Friends to look for fosters until room opened at the Sanctuary. What she got instead was a generous donation of a private cattery to house the cats and over a dozen volunteers from throughout the organization offering to cover a twice-daily schedule of cleaning, feeding and medicating. 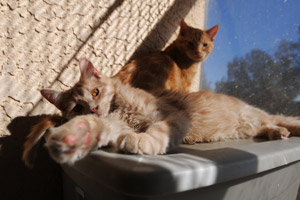 “This is a great example of staff pulling together to come up with a solution for the cats and possibly averting a tragedy,” says Janice.

The cats don’t seem to recognize that they were plucked from a perilous situation. This perpetually happy crew takes ample advantage of having their own building to run in (with access to an outdoor cattery during the day to boot), and they also benefit from frequent human interaction.

It’s nearly impossible to get through a shift without cuddling Celeste, rescuing the bleach bucket from being tipped over by a marauding pack of black kittens, or spending time trying to coax Ella out of her shell. She’s the only one with even a hint of shyness, however.

“Clearly the caregiver and her children adored these kitties and handled them with love and kindness,” says Janice. “She has been a wonderful caregiver to all the cats in her community for years, so I’m very happy we were able to support her and help out this lucky group of cats, too.”