Image
What is it like to have a potbellied pig as a pet? Read about a day in the life of a pet piggy. Also, get info on teacup pigs and more.
By David Dickson and Amy Abern

There are many factors to consider before bringing piggy home. For instance: Do you have stairs in your home? If so, you’re going to need ramps because pigs can’t climb stairs. Is your home big enough to dedicate a single room for a piggy litter box? Pigs are a lot bigger than cats, so do the math! Do you have a yard? Pigs absolutely love rooting around and they need a place to do it.

Other things to consider: Are you looking for an animal companion who’s easy to train? You won’t find a smarter animal than a pig. Do you have cats and dogs? Terrific! After some time getting to know each other and establishing rank, pigs generally bond easily with most family pets (although it’s important that all your animal companions have safe havens of their own to stay in when no one is home). Are you looking for a long-term relationship filled with fun, laughs and unconditional love? If so, then there’s a good chance you’re going to make a great potbellied pig parent.

Yvonne McIntosh, manager of Best Friends’ Piggy Paradise, believes that pigs can make wonderful animal companions, but they aren’t for everyone. The best pig parents — and this is really important — are the ones who have done their research to make sure they are the right fit. "You need to do your homework," says McIntosh. "This is true any time you bring an animal into your home, but it’s especially true with pigs because they come with unique needs."

A day in the life of a pet pig

It’s 9 a.m. … time to get up! A typical day in the life of your family potbellied pig — let’s call him Snorts — may begin with his wake-up call of a gentle head butt against the bed, or soft grunting noises. Just like most cats and dogs, pigs enjoy routine. So you can bet that when Snorts wakes up, he’ll wake you up, too.

After getting out of bed, you follow Snorts down the hall to the kitchen for the first of his two daily meals. If you live in a multi-storied home, you’ll go down the stairs; Snorts will go down the ramp. "Pigs can’t negotiate stairs," explains McIntosh. "They also can’t jump up on furniture, or on beds. The best home environment for a pig is a flat one." 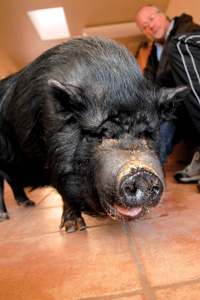 Remember that pigs have unique needs.

Now you’re in the kitchen making breakfast: for you, coffee and toast; for Snorts, a head of romaine lettuce and half a cup of dry pig-food pellets made of condensed fresh greens and grass, specifically formulated for potbellied pigs. (Farm pigs eat a different formula, so McIntosh says make sure you pick up the right bag of pig food.) Occasionally, it’s OK to give Snorts some fruits and vegetables, like blueberries, green beans or zucchini, that have low sugar content. McIntosh notes, "You know what happens to children when they have too much sugar? Well, it’s the same with pigs."

Following breakfast, Snorts makes his way out of the doggie door into the backyard to play and root. If Snorts didn’t have access to outdoor activities, he’d be one unhappy pig. Rooting is to pigs as scratching is to cats.

Snorts needs to relieve himself. No problem: It took him only two days of potty training to figure out where to go. Snorts makes his way to the mud room and his litter box. Actually, it’s a kiddie pool that doubles as a litter box. After all, Snorts weighs 120 pounds, so he needs a much larger bathroom than your cat.

Snorts makes his way back into the house for some serious cuddle time. You and Squeaky the cat meet up with Snorts in the den. The pig has made himself comfy on some blankets on the floor. Squeaky has grown quite fond of Snorts, but there was an adjustment period when Snorts first joined the family. Squeaky didn’t like Snorts eating his food. And there was a problem with the red blanket. Every time Squeaky tried to lie down on HIS red blanket, Snorts pushed him out of the way so he could lie down on it. Fine. Squeaky agreed to take the high road and let Snorts be top dog, er, pig. Now they each have their own room with their own creature comforts.

Right now, Squeaky is happy to see Snorts. He trots right over to him and snuggles up against his belly. You join them on the floor for a group hug. Remember, Snorts can’t jump up on the couch.

Later on, Snorts amuses himself with a plastic ball that has food pellets inside. Then it’s dinner time; Snorts gets the same food that he did at breakfast. A little more rooting time outside, another potty break, one more visit with you and Squeaky, and he’s off to bed.

The myth of teacup pigs

In the past year, the popularity of pigs as pets has skyrocketed, thanks to a little bit of star power and a lot of misinformation. The emergence of the "teacup pig," a supposedly miniature porker, inspired thousands (maybe hundreds of thousands) of impulse purchases in 2009. Soccer star David Beckham and his celebrity wife, Victoria, received a pair of mini-piggies as a present; socialite Paris Hilton bought her miniature pig, Princess Piglet, from a breeder in Oregon for $4,500. And pigs as pets made Time magazine’s 10 biggest pet stories of 2009.

That viral Internet picture of the tiny pig inside the teacup? The photo is real, but that’s not a mini-pig. The photo is of a baby pig, probably no more than a couple of weeks old. Chances are that pig is of the potbellied variety and will grow up to be as big as Snorts. "That pig in the photo could very well be a ‘mutt,’" says McIntosh. "He could be part potbelly mixed with farm pig or wild pig, or even all three breeds. There’s no knowing just how big that piglet could get."

"Teacup pig" is a marketing term, not a breed. Because it takes three to five years for pigs to reach full maturity, it’s easy for opportunistic breeders to pass off a baby pig as a miniature. It might be two years before the unsuspecting consumer realizes he’s been duped (i.e., there is no such thing as a tiny pig). Many pig shelters and sanctuaries across the country are now receiving requests from people who want to get rid of their pigs because they didn’t expect them to grow so big.

Outside Tucson, Arizona, Mary Schanz runs Ironwood Pig Sanctuary, where 500 pigs live the good life on 80 acres; another 100 live in two satellite locations. The good news: Schanz says she has received only a few calls from people wanting to relinquish their pet pigs because of size. The bad news: She receives a lot of calls from people looking to place their pigs for more universal reasons. "Moving and divorce are the reasons I hear most as to why people are giving up their pigs," says Schanz. "A lot [of it] has to do with foreclosures and the economy. How sad."

It’s hard enough to relocate with a pet dog or cat; imagine trying to find a new home with a pet pig. Besides finding an affordable place with enough space and a yard, you have to find a place that is zoned for pet pigs. And this is tricky even under the best of circumstances.

If you move to a rural area with a pet pig, chances are that zoning isn’t an issue. But if you and your pig want to live in a city, suburb, town or village, it’s important to learn the laws as they pertain to pet pigs.

Dawnell Wease of Grand Blanc, Michigan, and her husband, Gary, wanted to adopt Raisin the pig from Best Friends Animal Sanctuary, but thought their area wasn’t zoned to keep potbellied pigs. Dawnell, who had gone on sleepovers with Raisin, missed Raisin so much after a recent visit that she decided she had to at least check into the zoning laws. Her first call was to the city. They informed her that there was a minimum land requirement of three acres. Gary and Dawnell live on nearly four acres. Then the city said her neighborhood development association might have laws that would supersede city laws, so she checked there next. Nope, no laws. In fact, she even started asking neighbors if they would mind. Not only were they OK with the idea, they started getting excited about the possibility of having a pig around. Which meant there was only one thing left to do: fill out an adoption application.

During those sleepovers, Dawnell came to realize how intelligent and loving pigs are … and also how willful. "She’s just like a little child," says Dawnell about Raisin. "She is such a doll."

Read more about pigs as pets