Pug rescued from puppy mill had the best life

Piper the pug had been through a lot by the time she was rescued from a puppy mill in 2009. But the best chapter of her life started when she came to Best Friends Animal Sanctuary. That’s where she met her adopter, Brandy Rocchio, and began a journey that was far longer and happier than anyone could have imagined.

Brandy and Piper were together nearly 10 years. When Piper passed away in mid-November, she was believed to be 19 years old. Although she lived a charmed life as a pampered pet after her rescue, she also became an ambassador for pet rescue, adoption, senior pets and rescuing puppy mill dogs. 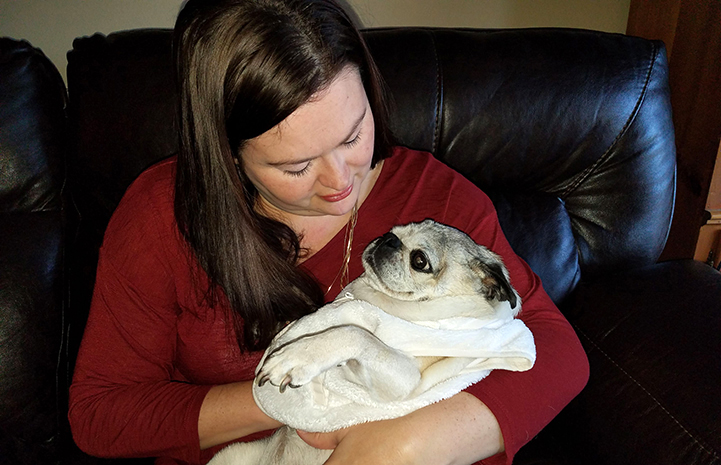 A puppy mill is a dog breeding facility where dogs live in small cages and female dogs are bred as frequently as possible. Dog mills in the U.S. supply pet stores with huge numbers of purebred puppies, as well as puppies of so-called designer dog breeds.

Puppy mill puppies are also sold on websites and through classified ads. Many people unknowingly buy puppies who have genetic disorders or who may be sick because of poor conditions in puppy mills. Meanwhile, millions of healthy, loving dogs of all ages are available for adoption at shelters and rescue organizations around the country. 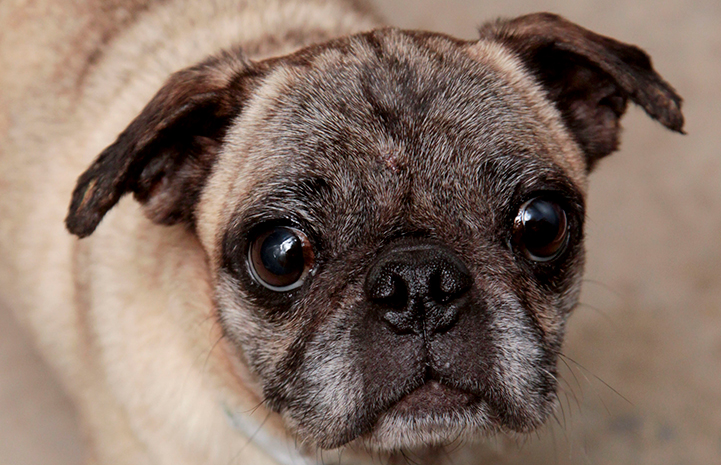 When Piper arrived at Dogtown, her body showed signs of serious neglect and it was clear she’d had many litters of puppies. She was extremely underweight and missing most of her fur. Her skin was irritated and in rough shape. Since she was not well-socialized, she was also quite unsure about people. But all that was about to change.

Brandy, a southern Utah resident, was volunteering at Dogtown when Piper (along with other rescued puppy mill dogs) were brought in. “When I saw the pugs, I got excited because I am a pug person,” Brandy says, “But I didn’t expect any of them to let me hold them. Piper ran up to me and asked me to pick her up. I was holding her and giving her love, which she hadn’t let anyone else do.”

Although Brandy had cats with special needs at home, she agreed to foster Piper to see if she’d be a good fit for her household. “The cats loved her,” Brandy says. “I had fostered puppies before, and it had been too much for them to handle. But Piper was so sweet and calm they took right to her. She instantly became part of the family.”

Thinking of fostering a pet? 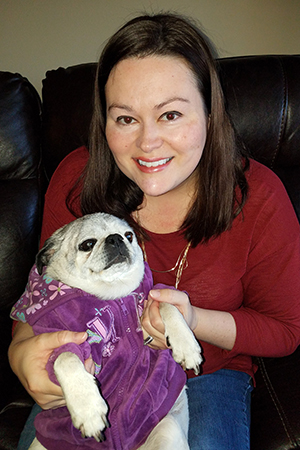 Piper’s life outside the puppy mill

Piper always felt safe with Brandy. She slept in Brandy’s bed and went everywhere with her. In the beginning, Brandy carried her around in a baby pouch and let her down when she felt safe. Together, they walked all over town and met as many people and friendly dogs as possible. As Piper gained healthy weight and confidence, she began riding in a stroller and then she began walking on her own, with Brandy picking her up only when she seemed overwhelmed.

Brandy and Piper logged countless miles on their daily walks and took some epic road trips. “She had a harness that hooked to the seat belt and a booster so she could be high enough to look out the window. She eventually decided that if I didn’t roll the window down, she would,” says Brandy.

Piper moved from Utah to California to St. Louis with Brandy, and everywhere they went they helped to spread awareness about animal welfare. “Piper was an ambassador for adoption, rescuing, geriatric special needs animals and fighting puppy mills,” says Brandy.

Piper could change minds and hearts. Over the years she won the friendship of one of Brandy’s cats, who was rescued after Hurricane Katrina and was once completely unsocialized and terrified of people. Because of their special bond, the cat began cuddling on the couch with her and Brandy.

Despite her past, Piper was surprisingly strong and healthy for most of her life. She survived cancer and came through major dental surgery with flying colors. Besides some age-related arthritis and eyesight issues, Piper had slowed down but was going strong until recently, when she began having lung and breathing issues. As hard as it was to let her go, their life together was more than Brandy had ever hoped for.

“I rescued Piper with the intent of giving her a couple of good years, and she lasted longer than I ever expected,” Brandy says. “I took a chance on her, and she paid me back in love and devotion for nine years. Both of our lives have forever been changed through this journey.” 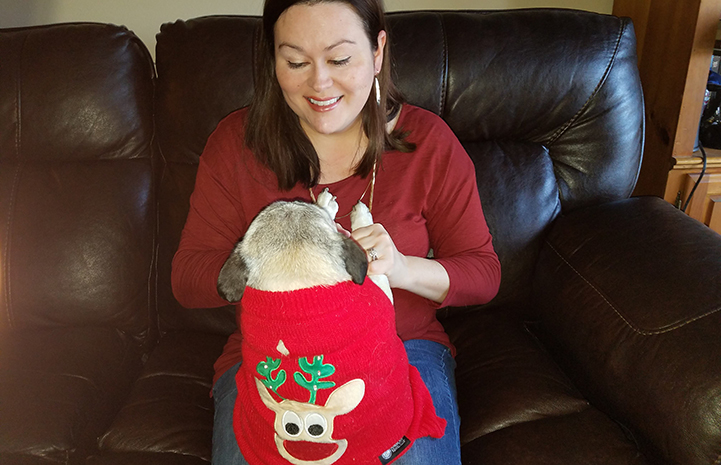 Photos courtesy of Brandy Rocchio and by Sarah Ause Kichas