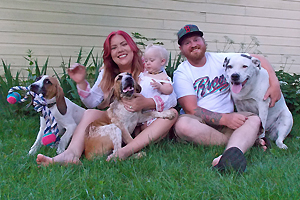 Gilligan and Valentine are adored members of the Meyer family, who live near Ponderay, Idaho, but they went through a lot to get there. In fact, the hound puppies are lucky to be alive today. They’re part of a success story that brought many people together to save a dozen and a half puppies whose lives were in danger.

Gilligan and Valentine had their first stroke of bad luck when their family gave up on them. Then, another puppy at the Panhandle Animal Shelter, where Gilligan and Valentine had been surrendered, fell ill and died, despite shelter staff’s efforts to save him. The diagnosis was a bad one — distemper, a highly contagious virus that attacks dogs’ respiratory, intestinal and nervous systems.

While distemper put the lives of all pets in the shelter at risk, puppies were the most susceptible. This forced the shelter staff to act quickly and make some tough decisions. What they didn’t bank on was Best Friends waiting in the wings, ready to provide crucial funding when the puppies needed it most.

Panhandle Animal Shelter (PAS), which serves Bonner County, Idaho, is part of the Best Friends No More Homeless Pets Network, a group of rescue organizations and municipal shelters across the country working to end the killing of animals in our nation’s shelters. “Because we’re a Network member, we have access to resources and support we wouldn’t otherwise have,” says Mandy Evans, executive director at PAS.

Many shelters facing an outbreak of distemper will kill all dogs in their care (referred to as “depopulating”) rather than embark on the costly and time-consuming job of isolating the illness to prevent its spread, and starting intensive treatment for all exposed dogs and puppies.

“We knew depopulating was the logical solution, but we absolutely didn’t want to go down that road,” says Mandy. “We were fortunate that the ill dogs were all puppies that had shared the same isolation wards.” That meant dogs in other areas of the shelter could be tested, and if they were not infected they could still be available for adoption. But it would be a long and expensive process to save the remaining puppies. That’s where Best Friends came in, making it possible for brother and sister pups Gilligan and Valentine to get well and be reunited in a home. 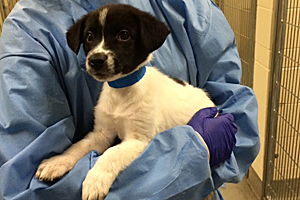 Grant to save puppies

Best Friends presented PAS with a $750 medical assistance grant to help save the puppies. “I was overjoyed to have Best Friends step in,” says Mandy. “The stress was tremendous, and then people and organizations started offering to help.”

Gilligan had already been adopted and was living in Cassandra Meyer’s home when he started showing symptoms of distemper. He received immediate care and with each passing day the family saw his tiny spirit grow stronger. But they did much more than just save their newest family member. They took in one more pet who needed them.

When Cassandra learned that Valentine (also from Gilligan’s litter) needed help, she took her in, too. “Shelters used to put down all the animals if there was distemper,” says Cassandra. “We really want people to know that distemper is not a death sentence. It can be treated and the dogs can go on to have happy and healthy lives.”

After a month on pins and needles that was filled with treatments and tests, all but two of the puppies diagnosed with distemper were healthy enough to be adopted. All of them, including Gilligan and Valentine, are now cherished family members — all because the shelter didn’t give up on them.

Photos courtesy of the Meyer family and Panhandle Animal Shelter