Image
The puppy socialization program includes parrots. Pups are introduced to birds to familiarize them with new and different things in the world.
By David Dickson

In the puppy socialization class at the Best Friends Puppy Care Center, the name of the game is to expose the puppies to as many different real-life sounds and experiences as possible. The whole point is for the puppies to learn not to be afraid of something merely because it’s new. Everything from doorbells, to vacuum cleaners, to in-sink garbage disposals is on the curriculum.

Socialization for birds and dogs 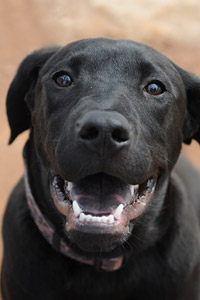 Monarch is ready to socialize

There’s a window of opportunity with puppies where, if they are socialized properly, they can learn confidence skills that last a lifetime. Even so, there’s a world of difference between a doorbell and a full-blown cockatoo screech! Accordingly, the parrots at Best Friends have been added to the socialization program in the form of a day trip.

For any who have not been to the Parrot Garden, the parrot part of the Sanctuary, there’s a darn good reason a large container of disposable ear plugs hangs on the wall by the front door. If you’ve never been in a room full of cockatoos shrieking for attention, your ears can feel free to thank you. A jet engine might sound like a pleasant spring breeze whispering through the trees by comparison.

Cockatoos are certainly not the only parrots who make noise. Whether it be sharp whistles, loud clicking sounds, incessant mumbling chatter or even recognizable words, parrots as a whole offer a nearly endless variety of sounds that can spook even the most confident dog

A dog might be able to yawn at blenders, vacuums and even young children, but the noise from a parrot could be the one thing to scare him out of the room if he’s never heard one of these birds before. The opposite holds true as well. A lot of parrots have never been around dogs and can likewise feel nervous if they move into a home with them.

The staffers at puppies and parrots felt there was an opportunity to address both problems. In addition to the standard bag of tricks in the puppy socialization class, the pups are now going on field trips over to the Parrot Garden. The main agenda is simply to let the animals spend time around each other. During each visit, the puppies and parrots are kept a safe distance from one another and are always supervised. 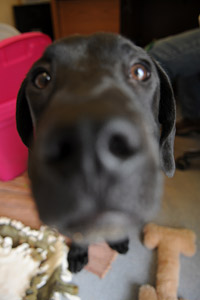 Monarch is a pro!

A puppy and a cockatoo

Monarch is the most recent puppy to journey over to the Parrot Garden. Talk about a cool customer! Most of the pups are taken aback by all the strange sounds, which is kind of the whole point. They tend to relax after the second or third outing when the noises aren’t so foreign. Monarch, on the other hand, was a pro from the beginning.

The parrots, with all their strange squawks and jibber jabber, didn’t phase him in the least. He was just happy to be there. Monarch came to Best Friends with the rest of his litter after they’d been found as strays in the wilderness. In the beginning, the whole group was afraid of nearly everything. They’ve come a long way, and Monarch did his litter proud on the field trip.

Peaches the Moluccan cockatoo also experienced a first that day. It was his first time being so close to a puppy. Peaches fluffed his feathers a few times around Monarch, yet otherwise remained intrigued at the strange, new visitor.

Monarch was utterly fascinated with the whole setting. He didn’t even mind listening to the other birds clamor at high volume for their share of the spotlight. He just smiled and remained his happy, playful self. No doubt, this is one incredibly good-natured dog. So, if anybody out there in a traveling bagpipe/bugle band wants a loving companion who can stay calm pretty much anywhere, we might have found your perfect match!

Read a story about how one dog taught another dog to like people.