Image
A quilt commemorates the Great Kitty Rescue in Pahrump, Nevada, where over 800 cats were rescued from a hoarding situation.
By Jennifer Hayes

Everyone has heard of magic carpets, but what about a magic quilt?

Such a quilt exists, and it has the power to educate, make money and even change lives. And it’s currently making a stop at Best Friends.

The origin of the Great Kitty Rescue quilt

Perhaps the quilt’s powers are a result of its philanthropic beginning.

In July 2007, Best Friends was asked to help when an organization in Pahrump, Nevada, became overwhelmed and let things get out of control. Over 800 cats were saved from dreadful conditions. Throughout the effort, details and photos were published online. However, it was one stark image of a cat named Cover Girl that helped ignite worldwide support for the effort. Thanks to that outpouring of support, hundreds of cats were adopted. The rest came back to Best Friends Animal Sanctuary or were taken in by other rescue organizations.

One of those groups was Shadow Cats, a No More Homeless Pets Network partner. They welcomed not only Cover Girl, but also 16 other cats who had contracted the feline leukemia virus. A fan club for the cats soon developed, including the quilt’s designer.

Now, five years later, the quilt has become a physical representation of Shadow Cats’ mission. Those lucky enough to view the quilt, learn about the group’s trap/neuter/return (TNR) efforts, advocacy for community cats and rescue work. And one quilt panel honors the iconic Cover Girl.

Kris donated the quilt to Shadow Cats, to be featured in an auction fundraiser. The special quilt was the auction highlight. The $700 final bid was an unexpected and very welcome surprise.

The winner of the quilt

A resident of Winnipegosis, Manitoba, in Canada, Garry Gabrielle was among those who followed the GKR online. However, his interest went from virtual to physical when he decided to visit Pahrump and adopt. Four GKR cats are now part of his family.

However, the image of Cover Girl touched his heart, so he began to follow Shadow Cats and their work.

"I feel that Cover Girl was probably the symbol of the whole rescue," says Garry. "I think she was one of the forces behind the reason why so many people dug in and helped."

And help he did. Because of his connection to the GKR and Cover Girl, he’s the one who recently paid $700 for the quilt.

But the story doesn’t end there. Rather than take immediate possession of the quilt, he wanted to share it with others who felt connected to the cats of the Great Kitty Rescue. The quilt will be displayed at Casa de Calmar, the building that houses feline leukemia–positive cats, like Cover Girl. He plans to visit the Sanctuary in October, when he’ll bring it back home. There it will stay, until his four Pahrump rescues cross the Rainbow Bridge. At that point, it will be returned to Shadow Cats.

"This quilt is a tribute not only to Cover Girl, Shadow Cats Rescue, Best Friends Animal Society and the Great Kitty Rescue, but to all cats that have and will suffer indignities at the hands of humans," says Garry. "It is also a reminder of what love, care and compassion can do for those whose souls have been broken and left for the elements." 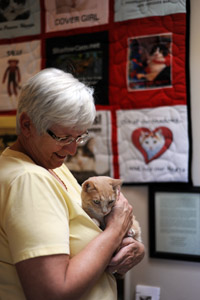 Juniper has lived at Best Friends for five years following her rescue from Pahrump, but just moved into the Calmar lobby the same week the quilt was displayed — and then she was adopted.

Coincidence? Could be. Or it might be a little bit of magic.

Paul Altherr, the new chief programs officer for Best Friends, and his wife, Peggy, had already chosen to adopt Fade from Calmar, but wanted another feline to keep him company. They had a list of potential companions, but it was love at first sight when Juniper met them.

Normally very choosy about her friends, Juniper jumped right up on Peggy’s lap and followed her around. When the couple exited the building, Juniper followed them to the door, where she pawed it after they left. Obviously she was saying, "Please don’t go. Pick me!" It worked.

So like Frosty the Snowman’s hat, there must have been some magic in that quilt during its visit to Best Friends. It managed to change Juniper’s life.

"We feel honored to display this quilt that represents a wonderful rescue of many hundreds of cats and all the amazing people connected with it," says Joni Miller, caregiver at Calmar. "I think that quilt represents the bonds of friendship that we made through those cats and how life moves forward and ties us all together."

Let’s hope that quilt still has some of that great mojo left to help even more cats as it continues its journey.

Consider adopting one of the Great Kitty Rescue cats. Though only two remain in Casa de Calmar, Doug and Rodeo, there are many more cats from the Pahrump rescue who would love a home to call their own.