Image
Considered exotic pets, rabbits are great companions when kept as house pets, where they are safe from predators and extreme weather.
By Christelle L. Del Prete

Rabbits are considered exotic pets, and they don’t all enjoy being handled by humans. But when they are socialized to people and kept in the house, where they’re safe from predators and extreme weather, they make fantastic companions. Lacey, the newest addition to the Bunny House at Best Friends, is positive proof of that. 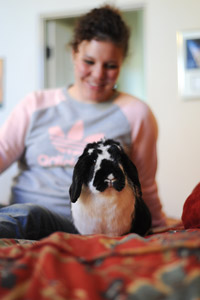 Lacey, a pretty, lop-eared bunny, lost her home when one of her people became ill and required an extended hospital stay. She came to Best Friends because there wasn’t a local shelter or rescue group available to take her. But the staff at the Bunny House is thrilled to have such a laid-back, loveable, sweet rabbit. Good with being held and handled, Lacey will ask for pets by pushing against your hand, like a dog. It’s clear that her people loved her and that they had taken the time to properly socialize her. “You can tell when they’ve been (treated as) pets,” says volunteer Sharen Berry.

Sharen’s not the only one singing Lacey’s praises these days. Samantha Woyak, who will soon complete a five-week general animal care internship at Best Friends, is completely smitten with her. Sam’s internship requires her to spend one week in each of the main animal areas at the Sanctuary. Of all the animals she’s met, it’s Lacey she’s bonded with the most. “The first time I saw her,” Sam says, “I thought she was so beautiful; I couldn't take my eyes off her.”

Lacey took to Sam just as quickly. When Sam sat down on the floor with her, she crawled right into Sam's lap and started licking her hand. “She’s a people bunny,” Sam explains. “As soon as she knows she can trust you, she just wants to be with you.” So Sam decided to take the rabbit on a sleepover.

Though Sam and Lacey’s bond was instant, the intern was a novice when it came to rabbits. During her week at the Bunny House, Sam had learned a lot about the species – for example, that they are quite fragile, and there is a proper way to pick them up and hold them to avoid injuring them. Despite all the knowledge Sam gained, she wasn’t sure what to expect from a bunny on a sleepover.

Slumber party for a rabbit 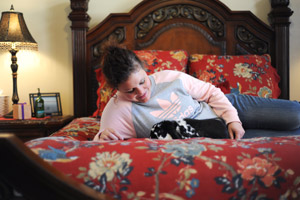 It turned out to be a fantastic slumber party. As soon as Sam brought Lacey back to her casita, the curious rabbit hopped all around to check everything out. Far from being nervous, she took everything in stride and was a clean and respectful houseguest. Like many rabbits, Lacey is litter box trained. And, though Sam was careful to keep dangerous household items like electrical cords out of Lacey’s reach, Lacey showed no interest in chewing anything other than her food and toys.

Bedtime turned out to be cuddle time; Sam curled up on the floor with Lacey, who closed her eyes and fell asleep while Sam gently petted her face. Then Sam woke up to “a big Lacey face” sniffing her nose. “She’s a really good house bunny,” says Sam. “Whoever adopts her will get a great rabbit.”

Get more information on adoptable rabbits at the Sanctuary.

Get more information and resources on rabbit care.