Image
Rainbow Animal Rescue and Bully Paws Pit Bull Patriots step up to help a pitbull dog in need who had lived life on a chain.
By Denise LeBeau

Oakley was rescued from a rural county shelter in Virginia. With no foot traffic and only a few volunteers to help get animals into homes and rescues, it was pretty miraculous when the young pit-bull-type dog found his way out of the system to a rescue in the city. His journey to becoming a cherished family member was underway, but it would not be a direct route. 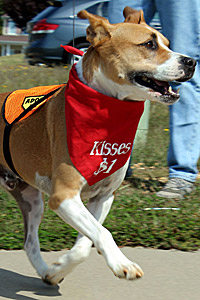 No More Homeless Pets Network partner Rainbow Animal Rescue routinely pulls from county and municipal shelters where the animals are most at risk. Esther Williams, the founder, takes as many as she can. Many are heartworm positive; some have other treatable but costly conditions. She doesn’t cherry pick who gets her help.

So it made sense that her heart would go out to Oakley. The animal control officer confirmed that this sweet dog, who was heartworm positive, had been chained out in a yard for the first two years or so of his life. That is a critical time in a dog’s development, and it left Oakley with scars naked to the eye.

“The volunteers loved him and one even fostered him,” shares Esther. “But Oakley bonded to one person, and when her husband punched a wall, Oakley got into protective mode and nipped at him. Oakley didn’t break the skin, but he couldn’t stay with the volunteer any longer. We stepped in and took him.”

His next foster lasted a few days. The foster after that was pretty good fit and helped keep him healthy and safe during his heartworm treatment. But Esther got word that there were some boundary issues, as in Oakley was bounding over a rock wall, a serious no-no for a dog recovering from heartworm.

Oakley went into his next foster and got along great with his two new canine siblings. But, his foster person got sick and he was moved again. This time to a young man who seemed ideal – a runner with a fenced yard. It seemed like a perfect fit for this high-energy fur kid. This foster even took him through obedience, but in a sad twist of fate, the foster decided he was getting too attached to Oakley and gave Esther a few months to find Oakley another residence.

Bully Paws to the rescue

“Panic mode started to set in,” says Esther. “Oakley is very strong and needs the right environment. We knew we couldn’t put him with just anyone.”

Bully Paws Pit Bull Patriots, also in Virginia, decided to get on board to help Oakley. Their “promotion foster mom” Vivica Stone helped turn the tide. Vivica is an animal advocate of heroic proportions. She transports for Homeward Trails, she fosters and helps run two adoption events for Meow Stories, and she’s feeding three community cat colonies for Shadow Cat Advocates. If anyone could help this misunderstood dog, it was her.

“Oakley had two very determined angels that kept bringing him to my attention on Facebook. His story unfolded in front of me over four or five months. This exposure turned him from just another pup in need to a ‘virtual’ member of my pack,” explains Vivica. 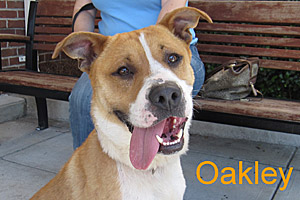 She took Oakley into her home. She knew he was at risk, having already been through about half a dozen previous foster homes, so she wanted to make sure he got the training and consistency he needed. It wasn’t all roses for even this seasoned foster veteran. She explains, “Adding him to our (multi-species) home was like lobbing in a couple of hand grenades! He had extreme separation anxiety, and he couldn’t be without me for a couple of minutes without stressing.”

She took Oakley to her veterinarian who put him on a low dosage of anti-anxiety medication. She also made an appointment with her animal communicator, Barbara Rawson, for a healing session.

Vivica continued to work with Oakley, and helping to center him helped to center her. She was diligent in her commitment to him.

She is thankful to Rainbow Animal Rescue for bringing Oakley into her life and for their commitment to him and his fellow pups in need, and as for Bully Paws, she is thankful that they are there to help the tougher cases and that they listen to their fosters and value their input.

All the teamwork and dedication paid off. Oakley was adopted in early November to a family that not only loves him to pieces but is committed to helping him get his Canine Good Citizen certificate.

Do you have a high-energy dog who could use some training? Check out our resources.