Redesigning an animal shelter with cat adoptions in mind

Image
Best Friends animal shelter in Los Angeles is redesigned to include open cat rooms, with cat shelves, beds, and more, to spotlight cats for adoption.
By Best Friends staff 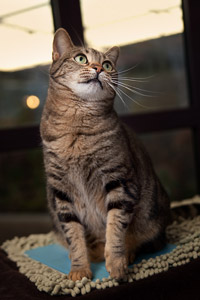 If you had a retail store offering just two equally wonderful items and one was consistently more popular with customers than the other, you'd wonder what the problem was. When you're offering dogs and cats for adoption and lives are at stake, you might lie awake at night worrying. This is the problem the staff faced when they first opened the Best Friends Pet Adoption and Spay/Neuter Center in Los Angeles. In the early weeks of operation at the Mission Hills facility, dogs were leaving the adoption floor for good new homes at a fast clip, but the cats weren't. With cats and kittens being the most at-risk pets in Los Angeles city shelters (and in other cities across the country as well), something had to be done.

Redesigning the shelter to spotlight cats

Mike Harmon, manager at the Best Friends Pet Adoption and Spay/Neuter Center, says that when cat adoptions had a sluggish start, the first thing they did was consider things from the customer's perspective (or in this case, the potential adopter's). The cats were great - beautiful, friendly, healthy and in every color known to cat lovers. But then Mike says, "We realized that it was a problem that potential adopters had to walk through the dog kennel to get to the cat area. And the cat rooms are way in the back of the building." The original building had cats housed in two large rooms, with about 40 brand-new stainless steel cages in each tucked along the courtyard that houses the building's rows of outdoor dog kennels. If cats are your main priority to adopt out, you don't want them hidden in the back behind a maze of barking dogs. 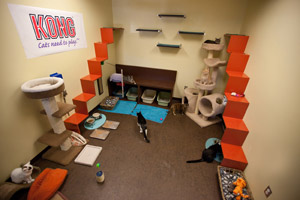 Meanwhile, Mike says, "The front lobby was intended to be the receiving area for the shelter, as the building was designed as an animal control facility. But under our contract with the city, we aren't allowed to receive animals from the public." It was prime real estate, but it was designed as office space and holding kennels for just-received dogs. Undaunted, the staff set to work revamping the entire receiving area to be a front-and-center adoption space for the cats. Office furniture came out and cat beds, scratching posts and litter boxes went in.

Two offices were converted to free-roaming rooms, where the cats aren't caged at all. Jackson Galaxy, feline expert and reality TV star, designed the two rooms for maximum kitty comfort, as well as to be an inviting space for visitors. Mike says, "We want adopters and volunteers to be able to walk in and socialize with the cats to meet their potential new family member in an open atmosphere and not in cages when possible. So when people walk in, there are cats lounging on the shelves, in beds, pillows. Plus the cats are less stressed, which keeps them healthier while they're here." Because the area is glass on two sides, visitors see the cats in the windows immediately upon entering the building. Adoptions picked up almost immediately. Now cats are going home at the same rate as dogs, some days even more.

Using every available resource to save cats' lives

Remember those brand-new, barely used cat rooms in the back of the building? They're not going to waste. Their out-of-the-way location and easy-to-clean stainless steel cages make the perfect setting for incoming cats waiting for their intake exams, and also as a base for a bottle baby kitten program.

All cats at the Best Friends Pet Adoption and Spay/Neuter Center are spayed or neutered, vaccinated, microchipped, and come with 30 days of pet insurance, a collar, tag, treats, and bags of food and litter.

To see adoptable cats at the center, visit the website.