Rescued kitten madly in love with his little blue blanket

Image
Little tabby kitten has a best friend: a little blue blanket. He loves cuddling in his blankie and taking it places with him.
By Nicole Hamilton

Wherever Lincoln is, his beloved fleece blanket isn’t far behind. He sleeps with it, plays with it and even manages to carry it up and down three flights of stairs! That can’t be easy when you’re a tiny kitten like Lincoln — but sometimes you’ve just got to have your BFF by your side. 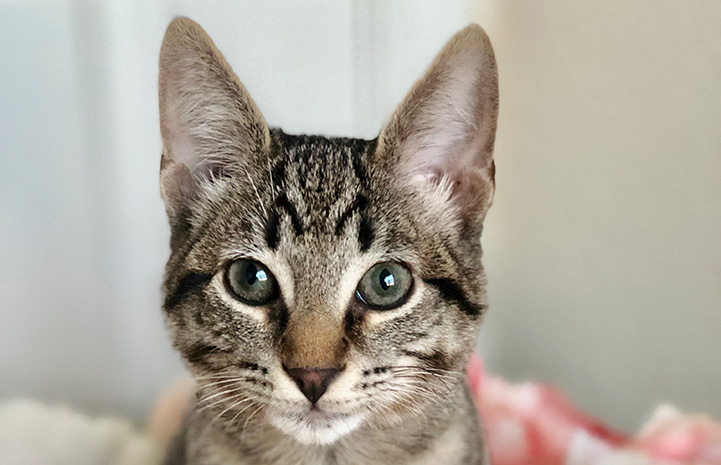 The little tabby kitten will wait patiently in the laundry room for his blanket to come out of the dryer. Then he’ll hop gleefully into the pile of clean clothes until he finds his blanket and pulls it out, reunited with his friend again.

Lincoln’s blanket love began at the Houston home of Holly Wimberly, who fostered Lincoln and his littermate, Scout, after the pair ended up at the Harris County shelter in Houston. Holly gives every kitten she fosters from Best Friends in Houston their very own blanket.

Sometimes she crochets them, but in Lincoln’s case, his was a blanket that was part of a cat hammock set she’d purchased. “It was just a simple fleece blanket — nothing special,” says Holly. But it was sure special to Lincoln. “He just started dragging it around.”

Holly got a good chuckle out of Lincoln’s cute habit. But then, this was something she’d come to expect from both Lincoln and Scout, who proved to be quite the characters. “Shenanigans,” says Holly. “They were always up to something. Lincoln had his blanket and Scout liked to chase water.” 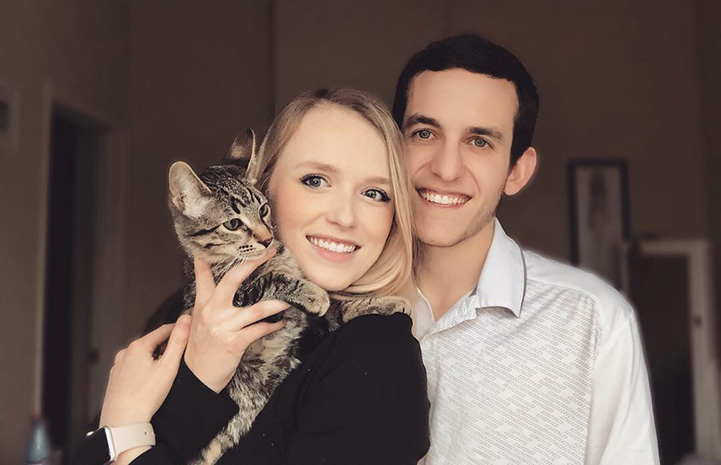 A security blanket becomes a BFF

Lincoln’s blanket love really flourished after he was adopted by Holly’s daughter, Jessica, who met Lincoln and Scout when she came home from Oklahoma City for a visit. She’d been thinking about adopting a kitten and fell in love with Lincoln as soon as she met him.

It was after moving to Jessica’s place in Oklahoma that Lincoln and his blanket became inseparable. “I think he wanted comfort,” says Holly. “It makes sense because it’s something familiar he brought with him from Houston.”

Since then, Lincoln’s blanket has become his BFF (besides Jessica, of course). Now, besides being determined to carry his blanket up and down the stairs, he always has it when he’s in the mood to jump up onto Jessica’s lap to cuddle.

Holly signed up to foster kittens because there’s a great need as kittens flood shelters everywhere each summer. Once you get them home, the chance for hilarity on the regular is a bonus. After all, a few good belly laughs are to be expected when you foster kittens. It’s like having tiny houseguests who are seasoned in physical comedy, the way they play with absolutely anything, climb, leap and tumble.

But you have to admit, Lincoln takes the cake (or the blanket in this case).

Watching kittens grow up and then get adopted is incredibly rewarding. Not only is Lincoln happy in his new home, but Scout also was adopted — by a friend of Holly’s.

Jessica says that Lincoln is becoming more independent. He still loves his blanket, but some nights, he climbs up the stairs and hops into bed with Jessica without his best friend. It’s as if the little kitten knows he’s gone from life in a big Houston shelter to a loving home where he’ll always be safe, secure, and loved. 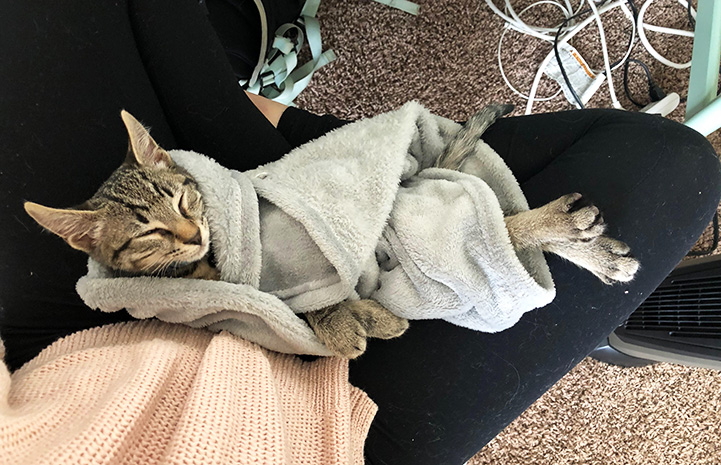