If you happen to be walking through one of the buildings in Dogtown and you hear a strange thumping sound, it’s probably just Keeley’s tail. The five-year-old retriever mix is one of the sweetest, calmest dogs you’ll ever meet. She has an endearing habit of stretching out on the floor with her legs propped up against the wall, yoga-style, while her tail drums a steady, happy beat.

That’s the amazing thing about Keeley. In spite of everything she’s been through, she’s always happy and never seems to have a bad day. Maybe it’s her personality, or maybe it’s because she’s so relieved to finally be in a safe, comfortable place.

Retriever mix happy despite her challenges

Keeley really went through the ringer before she was rescued and brought to Best Friends Animal Sanctuary. She was homeless and badly injured, with a bullet in her shoulder and two broken legs, likely the result of being hit by a car. She also suffers from hip dysplasia, a genetic condition.

After being rescued in Montana by a Best Friends No More Homeless Pets Network partner, Keeley had several surgeries to repair the damage to her body. Because she’ll need long-term pain management to keep her comfortable, she was brought to the Sanctuary. Though some days she’s a bit more stiff and sore than others, Keeley’s pain is managed well with medication, and she’s scheduled to begin hydrotherapy to keep her active and comfortable.

Keeley’s not a high-energy girl and you won’t find her running around her yard very often, if at all. She moves slowly and has a strong preference for affection over exercise. Belly rubs are her favorite and she’s learned a surefire method for getting them: walk directly in front of a person, plop down, roll over and look up pleadingly. The trick has brought her much success; it seems no one can resist her, especially when her mouth opens up into her signature grin and her tongue lolls to the ground. 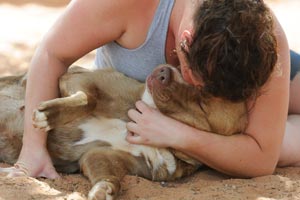 Keeley will never be a runner or a dancer like Raquel (a heeler mix who recently won “best in show” in a Dogtown contest for her ability to leap high and gracefully into the air and jump through hoops). But she’s feeling much better and life is good.

She goes for short walks with volunteers on the sandy trails in Dogtown, which are much easier on her sensitive joints than concrete or gravel. And she can mosey along at her own pace.

Important jobs for a special dog

She’s also got two very important jobs. She plays “mama bear” to her shy roommate Lakota, a three-year-old pit bull terrier mix rescued from a dogfighting operation. Lakota was very afraid of people and shut down when he arrived at the Sanctuary, but he’s since made amazing progress. And Keeley’s constant watch over him helps him feel safe.

Keeley is also an official greeter for the tours that come through Dogtown. This is one of her favorite things to do, and why wouldn’t it be? It’s the perfect opportunity to get more belly rubs. When her caregivers lead her out of her room, she goes up to each person in turn, and does her special rollover trick. Then she’ll take as many belly rubs as she can get before moving on to the next person. She makes sure no one is ever left out of that game.

Although her pace may be more tortoise than hare-like, Keeley’s perfectly content to go at her own methodical pace. She knows there’s absolutely nothing wrong with soaking up love and taking life slowly.