Image
A baby wild raven, who had a head tilt so severe that he held his head upside down, is rescued and rehabilitated. Read his story.
By Sharon St. Joan

With the hot sun beating down on him, the young raven stood in the middle of a ranch driveway — unable to move, wings down by his sides and (even worse) head held upside down. The kind woman who found him put on welding gloves before handling the bird and moved him to some shade under a tree. And then she called Wild Friends — the wildlife rehabilitation center at Best Friends Animal Sanctuary.

Carmen Smith, Wild Friends manager and chief licensed wildlife rehabilitator, picked up the bird and took him to Wild Friends, where apart from a broken toenail and the upside-down problem, the bird showed no other signs of injury. But his head-tilt was so severe that without help, he’d die. Luckily, the young raven had landed in just the right place.

What causes a head-tilt in birds? 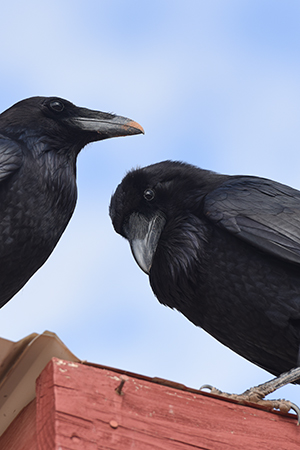 The experts at Best Friends set out to find the cause of the head-tilt. A test for West Nile virus came up negative, as did tests for lead, zinc and other heavy metals. It was possible the raven had eaten something poisonous that was no longer in his system but had left lingering effects.

The raven was treated with homeopathic remedies, including some for stress. It’s not easy to live in an upside-down world. Without being able to see the ground, the simple acts of walking and eating are a challenge. His caregivers broke up his food into small bites and held him while he swallowed.

It took nearly a month of care, but eventually the raven could hold his head up — a big leap forward. He could take a few steps too, but not without a lot of tumbles.

Meanwhile, another young raven rescued from nearby Peekaboo Canyon arrived at Wild Friends. Since the very thin bird tested positive for West Nile virus, the two new residents were prevented from being placed together. Housed across the way from each other, they eyed each other with curiosity. It always helps to have a friend.

The Peekaboo raven was hanging on to life by a thread, but after considerable care that included being kept warm and administering lots of fluids, he came around. He soon graduated to an all-you-can-eat diet of melon and other assorted delicacies.

When he finally tested negative for West Nile virus, he was put in with the head-tilt raven. (Wild Friends doesn’t give names to the wild patients in its care as a sign of respect to the animals’ wild natures.) The two ravens had a lovely time together cuddling, grooming and sharing food with each other.

After a few months, the head-tilt raven was able to feed himself and get around well enough to stretch his wings outside in an aviary. Out they both went to prepare for their release back to the wild. 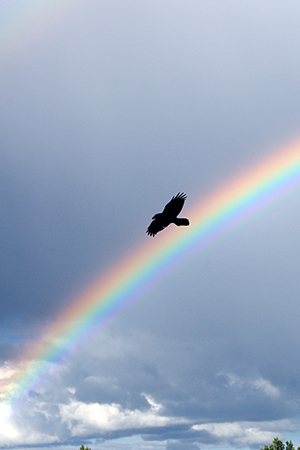 Soon, they were joined by three more raven youngsters who’d been transported down to Kanab from Second Chance Wildlife Rehabilitation near Price, Utah, where they had been receiving care from licensed rehabilitator Debbie Pappas. Best Friends often works with other licensed wildlife rehabilitators to share resources and expertise. These new arrivals from Second Chance were also ready for time in the aviary to prepare for release.

On a September morning when the summer heat had been replaced by cooler air, the gates to their aviary were opened, and out they flew — all five young ravens.  They were all strong and flying well.

The raven rescued in the driveway showed no trace of head-tilt. Within an hour or two they had joined a local band of 16 fledglings. Now, for this band of brothers and sisters, life is a party as they enjoy the happy days of fall, playing together in the sky and practicing their wild skills.