For three weeks at a time, students in some Los Angeles–area high schools host very special guests. The schools are unique; they are designed for teens at risk of not graduating. Curriculum is tailored so students can gain enough credits to return to a regular high school and graduate. The special guests? Dogs, once also at risk, simply because they had entered a municipal shelter. The program, run by No-Kill Los Angeles (NKLA) Coalition member K9 Connection, is how student Mark was matched up with a sleek black dog named Sari. By all accounts, the two were bettered by the experience. But there’s still one thing needed to complete the happily-ever-after. 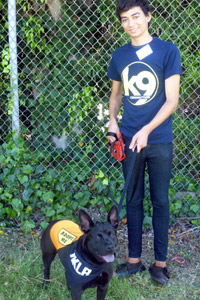 Rising to the challenge

Juliet Beynon, project director at K9 Connection, explains that each program begins with students choosing a dog to train. “Oftentimes students see their personality in the dog,” Juliet says. Seventeen-year-old Mark confirms he saw a bit of himself in Sari, but he was in for a surprise. “This calm dog I thought would be a breeze was actually more than I expected,” says Mark. Sari has a lot of energy; but Mark didn’t ask for a different dog. “Rather than be discouraged,” he says, “I took it as a challenge.”

Juliet says their students are no strangers to challenge. “Many are not living at home with both mom and dad. They have a guardian, or one parent who has a couple jobs. Often they’re just really sweet kids who have a lot of responsibility — you find out they’re taking care of younger siblings, trying to get them to school.”

For three weeks, Mark spent two hours a day with Sari. Like seven other students enrolled in the program, he spent one hour training his dog, and one hour with her in his classroom, where Sari was expected to be calm. Mark taught Sari to pay attention to her handler and basic cues. The purpose was twofold: Teach Mark to train a dog, and help Sari learn great manners that might help her get adopted.

While other program dogs came from an L.A. city shelter, Sari was picked up daily from Best Friends’ NKLA Pet Adoption Center. Angela Rovetto, the center’s lead pet caregiver, says, “We picked Sari for K9 Connection’s program because she was already a good dog, but she was getting overlooked by adopters.” They hoped sharp manners would help Sari stand out, get noticed and find a home. By the end of Mark’s time with Sari, he hoped so, too.

Still looking for a home 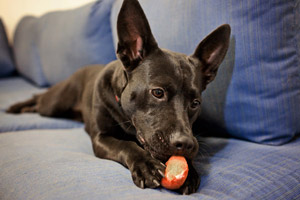 Mark and Sari passed their final test with flying colors. Now that Mark has completed the program, he’s eligible to be a peer leader in the next K9 Connection program and a paid intern after he graduates high school. K9 Connection will help him with college applications and job references. K9 Connection is pulling for Sari, too.

Angela says, “K9 Connection has showcased Sari at their events. They’re going above and beyond.” And she’s impressed with Mark’s work. Angela says, “Sari’s more in tune with people now. She’s waiting to be asked for something versus just running wild. She’s still wiggly and happy, but well-mannered and polite.” Sari is good with kids and other dogs, and wants nothing more than to be with people.

It’s only a matter of time for Sari. K9 Connection has a 100 percent adoption rate for dogs who have gone through their program. Mark’s program graduation speech sums up the feelings of all who meet Sari. He says, “I can’t wait to see this wonderful dog get adopted, so she can make someone else as happy as she made me.”

For more information about Sari and all the pets at Best Friends’ NKLA Pet Adoption Center, visit the website.

Photos by Lori Fusaro and courtesy of K9 Connection