Rottweiler wins a home for the holidays 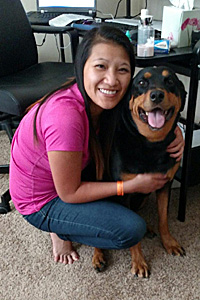 Kyra the dog walked around the Best Friends Pet Adoption Center in Salt Lake City with a confident little swagger. OK, more like a waddle — she was a bit chubby. Either way, people couldn’t help but come over and say hi to the 112-pound, eight-year-old Rottweiler. And she was more than happy to spend time with her admirers. Picking a favorite among them, however, was like picking a favorite child, so she treated everyone to the same easygoing greeting. Let’s just say exuberance isn’t her thing.

Who knows? Maybe she never showed extra excitement because she still missed her old family. Or maybe her consistent attitude toward everyone only made it seem like she just wasn’t that “into” any one person. Everyone was a friend, but no one was family.

Well, it just so happened that Kyra’s even-steven enthusiasm is exactly what won her the perfect home in the end.

When she came to Best Friends–Utah in Salt Lake City, calm, cool and collected Kyra seemed to take all of life’s changes in stride. She wasted no time settling into her new foster home — that’s for sure.

“She made herself right at home with us, squeezing onto the dog beds right in between our two pit bull terriers as soon as she came home,” says Jennifer Taggart, who provided a foster home for Kyra and is the assistant foster and volunteer coordinator for Best Friends–Utah.

All the dogs became fast friends — even one whose blindness typically makes it harder for him to befriend other dogs. “Some dogs do not do well with him since he can’t read dog body language and constantly runs into or steps on them,” says Jenn. “However, in typical Kyra fashion, she took it right in stride.”

To help Kyra meet more people (and to help her shed a few pounds) Jenn would park a half-mile away from the Best Friends Pet Adoption Center and walk with her the rest of the way. Kyra happily obliged every passerby who wanted to stop and give her a rub, but she never turned on the charm in a big way.

It was the same Kyra at a recent adoption event, too — just hanging out, taking in the scene, and giving everyone her standard happy-enough greeting. For some reason, nothing really excited her.

“She was very calm, just patiently resting on her bed and observing everything around her, but not doing anything to attract potential adopters,” says Jenn. “I was really starting to think she wasn't going to find a home that weekend.” Meanwhile, Kim Cao, who was walking around the event, had similar thoughts. But then Kim Cao came along. 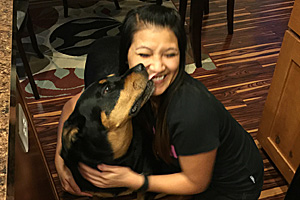 Kim had never had a dog before, and she wasn’t really looking when she went to the Best Friends adoption event with her boyfriend, Robert. She went just out of curiosity. And after the pair walked past some super-cute, but super-energized dogs, she was pretty sure she was leaving without a dog, too.

“Because I hadn’t had a dog before, I really didn’t want one who was too rambunctious or needed lots of training,” she says. And then she spotted Kyra. “When I walked over to Kyra, I was so impressed that she was just lounging there while all of the other dogs were bouncing around, trying to get my attention.”

Of course, Kyra was happy enough to come over and say hello. But prancing around — that was for the younger dogs, not her. Nor was it for Kim, who with Robert’s encouragement decided to take the easygoing giant home that day.

Now, some might think a Rottweiler is not a good breed for a first-time adopter, including Kim’s mom, who used to call Rottweilers “gangster dogs.” In fact, Kim didn’t even realize Kyra was a Rottweiler until after she’d adopted her.

“It never even occurred to me to put the two together,” she says. “Kyra is nothing at all like the stereotype.” Her mother agrees.

“The first time they met, mom was a little scared, because Kyra is so big,” she says. “But by the second meeting, mom wasn’t scared at all. She loves her now.” Changing hearts and minds is no biggie for Kyra. She takes that all in stride, too.

Learn more and get involved:

Photos by Sarah Ause-Kichas and courtesy of Kim Cao