From RV trip to animal vacation

Image
Couple who travel the country in their RV add Best Friends Animal Sanctuary to their list of cool things to do in Utah.
By Christelle L. Del Prete

Bill and Mary Ann O’Donnell are from Frederick, Maryland, but for the past two and half years they’ve called the road home. Since Mary Ann is retired and Bill owns his own business and can work from anywhere, they hopped into their recreational vehicle and hit the road with their two Italian greyhounds Luigi and Ricky.

Though they’ve crisscrossed the country, it’s not surprising that the O’Donnells, who call themselves “big animal people,” landed for a while in southern Utah and Best Friends on one of the animal volunteer vacations of a lifetime. What was surprising — at least to them — was that once they were at the Sanctuary and working with the animals, they didn’t want to leave. Awed by the natural beauty of Angel Canyon (home of Best Friends Animal Sanctuary), and head over heels in love with the animals who call it home, the couple put the road on hold and threw their hearts and souls into their volunteer work.

From RV trips to volunteer vacations 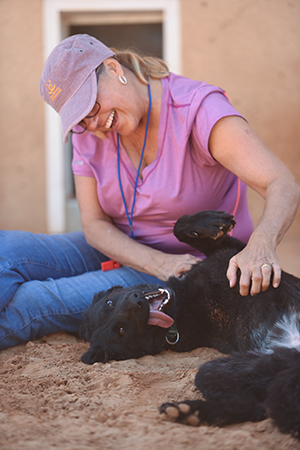 Bill and Mary Ann have known about Best Friends for a while, having followed the stories of the Vicktory dogs, rescued from professional football player Michael Vick’s illegal dog fighting ring. And they’ve attended Best Friends events and fundraisers all over the country in their travels. It was when they decided to do some Utah travel and to see some Utah sights that they booked one of Best Friends’ RV spots at the Sanctuary and set up a week of volunteering.

During that first week, the couple spent time in nearly every animal area working both the morning and afternoon volunteer shifts each day. They cleaned yards, walked dogs, socialized puppies and tried their hands at clicker training in Dogtown. They helped to feed horses and muck pastures in Horse Haven. They found the macaws at Parrot Garden to be wonderful conversation partners. At the Bunny House, they washed “boatloads of cilantro” for the rabbits and fed chopped salads to the guinea pigs.

Mary Ann was delighted to attend a first birthday party for piglets at Marshall’s Piggy Paradise, which included healthy “cakes” made from pumpkin, dried fruit, peanut butter, cinnamon and almonds. And at Wild Friends, the couple met Woodstock the duck when they helped to change the water in his pond. “He got to be a good buddy and followed me all around,” Mary Ann says.

Bill and Mary Ann even learned a few things about themselves. “Bill is a bunny guy,” Mary Ann says. “I've been married to him for 15 years and I didn’t know he was a bunny guy.” But despite Bill’s newfound love of the adorable gentle bunnies, she says their volunteer experience has “been a great balance.” Not only did they work with many different kinds of animals, but they also felt that the work they were doing really mattered and made a difference. “We’ve spent loads of times with the animals,” Mary Ann says, “but we also felt like we were helping to free up more time for the caregivers to dedicate to the animals rather than their cleaning tasks.”

At the end of their week at the Sanctuary, neither Bill nor Mary Ann wanted to take a break or leave. They loved what they’d been doing so much that they extended their stay for another two weeks so they could do more of it. They wanted to meet more animals and to talk to more people. “Everyone has been so nice here,” Bill says, and Mary Ann adds, “I think you get special people out here willing to do whatever they need to do for the animals.”

Clearly, the O’Donnells are two of those very special people. And while they are now back on the road again, there’s no doubt there will be more volunteer trips to help animals in the future, and that they’ll land again at Best Friends. 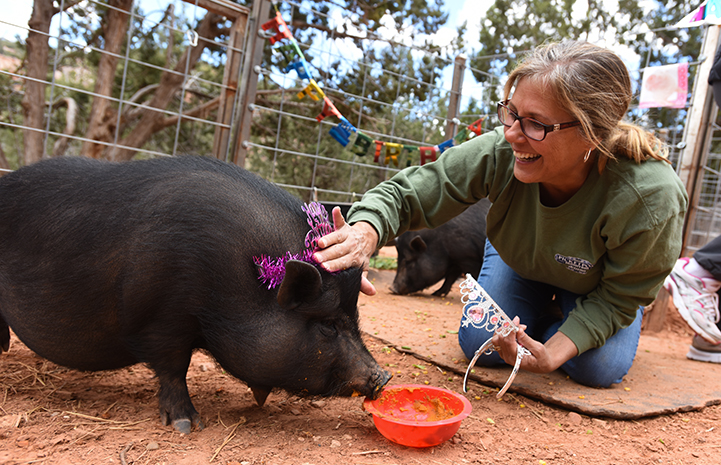