Sassy cat with allergies is home at last

Image
Cat with environmental and food allergies is put on a special diet, given weekly allergy shots, and has an air purifier in her room.
By Christelle L. Del Prete

While Sonya was at Best Friends Animal Sanctuary, she was well known and loved for her sassiness. She became the “Queen Diva” of Cat World headquarters, and although her caregivers wanted her to have the home-sweet-home she deserved, it was hard to imagine life without her. So, when she finally met her perfect match and went to a wonderful new home this past September, lots of happy tears were shed.

Found as a stray, Sonya was covered in fleas and miserable from ear mites when she was brought to a shelter in Colorado. While she was at the shelter, it became clear that the snow-white cat has allergies, and pretty severe ones at that. Under her white fur, Sonya’s skin was swollen, red and patchy. The shelter treated her for the fleas and ear mites, but she was going to need ongoing medical care for her allergies. Because the shelter didn’t have the resources to help Sonya find much-needed relief, she came to the Sanctuary. 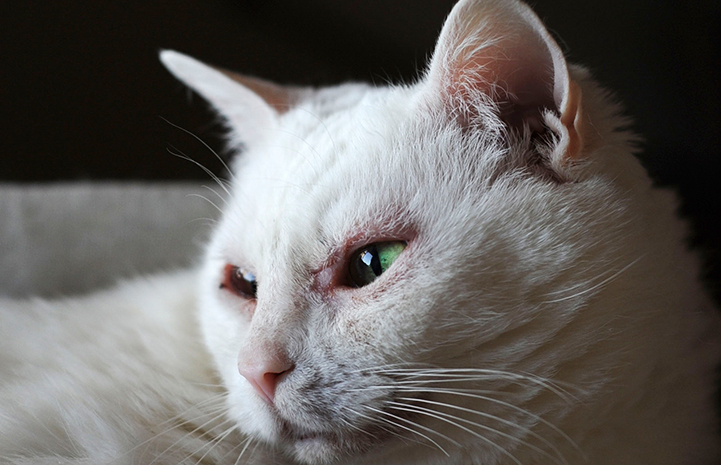 What to give cats for allergies

An allergy test revealed that Sonya has both environmental allergies and food allergies, so she was started on a special diet and given weekly allergy shots. The treatment helped her gradually build up an immunity to certain allergens, and antihistamines helped her feel some relief in the meantime. Her caregivers also set up an air purifier in the room where she slept, which helped to reduce allergens in the air.

While she was getting help for her allergies, Sonya made herself at home in Cat World. She loved to lounge on the volunteer coordinator’s desk so that she could supervise volunteers as they checked in for their morning and afternoon shifts. She also attended many important meetings in Cat World’s main conference room.

Because she could roam freely around the lobby, Sonya was the center of attention in the headquarters building, and her caregivers affectionately called her “Queen Diva.” But she wasn’t always affectionate with people. In fact, she could be downright temperamental. She did not like to be picked up, and she would accept being petted only on her own terms. She was particular, too, about how people petted her, where they petted her and how many times they could pet her. If they pushed past her limits, Sonya would swat or even bite. 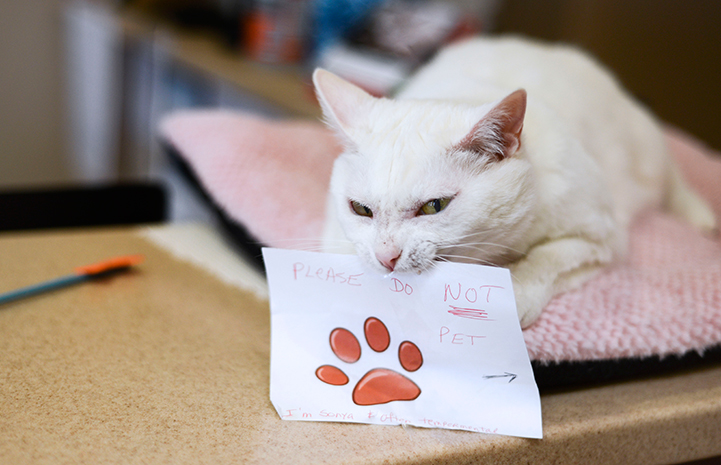 People who did not know Sonya had to be extra careful with her. But that was not the case when Sonya met Dianne Beckman.

Dianne, who lives in Las Vegas, came to volunteer at the Sanctuary this past July. While she was watching the volunteer safety video in the conference room at Cat World headquarters, Sonya came strolling into the room. Immediately deciding that she liked Dianne, Sonya began to walk around Dianne’s legs, purring loudly. She then jumped into Dianne’s lap and stole her heart.

Dianne couldn’t bring Sonya home right away, but before she left Cat World that day, she promised her that she would do exactly that someday. As a retired nurse, Dianne understood Sonya’s medical conditions and knew she could keep her feeling her best. 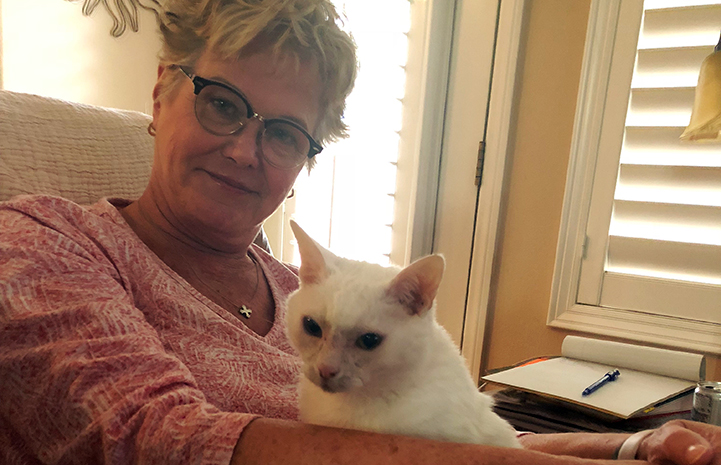 Two months later, Sonya, who is now 14 years old, hitched a ride to Las Vegas with one of her caregivers. She was going home at last.

“Sonya and I are two old souls,” says Dianne. “She is sassy, bold, strong, loving and, at times, unpredictable. Now that she’s with me in her forever home, she sleeps on our fluffy pillows at night.”

It’s a happy ending that couldn’t be more fitting for a “Queen Diva” of a cat. 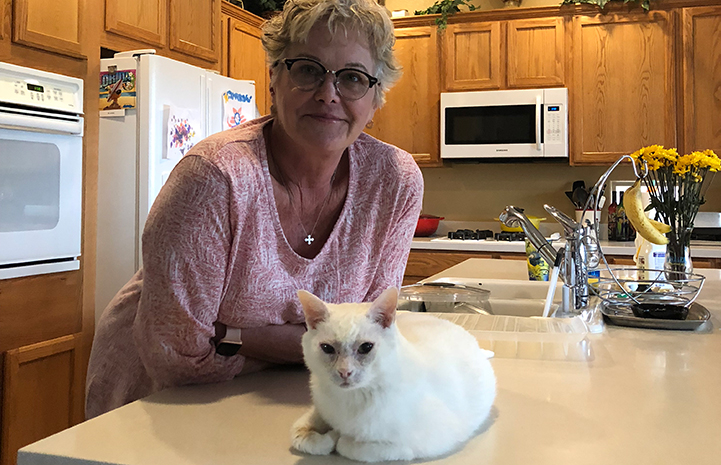 Photos by Best Friends staff and courtesy of Dianne Beckman