Image
Kitten from Roosevelt, Utah, at an adoption event had distemper, but rescue groups pull together to save other cats possibly exposed to the disease.
By Denise LeBeau

The Cool Cats of Summer, a cat adoption event that ran June 28 - 30, which was staged by Best Friends Animal Society-Utah and our partner PetSmart Charities® at PetSmart in Salt Lake City and featured pets from Community Animal Welfare Society (CAWS), Davis County Animal Care and Control‎, Friends of Animals Utah, Utah Animal Adoption Center, and Roosevelt City Animal Shelter, turned into a surprise massive rescue of its own.

During the event, one of the volunteers for CAWS, which is a member of the No More Homeless Pets in Utah Coalition, an assemblage of rescue groups and shelters from across Utah with a combined goal of making Utah no-kill, noticed that one of the kittens available for adoption from Roosevelt City Animal Shelter seemed lethargic. When the kitten regurgitated after eating, a volunteer whisked that kitten and three others from Roosevelt to the veterinarian's office to see what was wrong. The vet determined quickly that the kitten had distemper, and thus began a major rescue effort that rallied all the other groups to save the at-risk cats.

It was determined that the 67 cats from Roosevelt, who were at the event because of some caring volunteers who had pulled them from the shelter so they could be included in the event, needed to be isolated immediately. Distemper is highly contagious. One of the CAWS volunteers had a space that was up for lease and was empty. Luckily, there was someplace they could all go right away. They could not go back to the Roosevelt shelter.

"We want to offer support and assistance to the shelter, to save as many as possible," says Jamie Carter, of CAWS. "We knew they wouldn't stand a chance, and to see those little faces, we knew we would do all we could to save them."

"I have been at every super adoption and involved in adoption events for 12 years, and this is only the third time I've seen something like this happen (where an animal was sick or ill on the adoption floor)," continues Jamie. 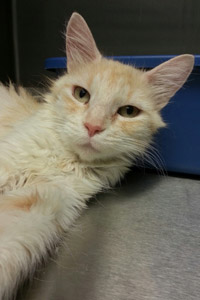 While one of the cats from Roosevelt did not make it, the rest of them pulled through to be the picture of health. All the groups rose to the occasion and took some, including Best Friends Animal Society-Utah, who still has Miss Peaches available for adoption. According to Tiffany Deaton, adoption and foster coordinator, the two-year-old buff tabby is "a sweet and cuddly gal. She took very good care of her little kittens and watched them all get adopted to great homes. She is now awaiting her forever home. She is very relaxed and loves to lounge around in the sun. She would make the perfect lap cat for a calm family who is looking for a new friend. She really enjoys the company of other cats and doesn't seem too bothered by mellow dogs. This cat would be a perfect catch for any family."

CAWS was thrilled to report that three of the five cats they took in were adopted. "Gretta and Belle bonded while they were in recovery, so we didn't want to separate them. We were so happy that they were adopted together. Frankie, the little black kitten, was adopted by the veterinarian who nursed him back to health. We still have Chance and Allie available," says Jamie.

"We are proud to stand by our rescue brothers and sisters, who want to take animals out of shelters to see that they have the chance to find a good home," exclaims Jamie. "You don't often expect to take a lot of animals back from an adoption event, but we are all working towards the same no-kill goals for Utah, and we have to support each other, even when the going gets rough."

Adopt from one of our No More Homeless Pets in Utah Coalition members.

Not in Utah? Adopt in your own community.