Image
Cat and her kitten are rescued from Zion National Park. TNR is not an option for these extremely shy ‘cat turtles,' so they come to Best Friends.
By Christelle L. Del Prete

Zion National Park near Best Friends may be a beautiful paradise that attracts visitors from all over the world, but it’s no place for a young homeless cat — especially when she’s trying to care for a kitten. But that’s exactly where they found Blair and Blossom in August of this year.

Baby Blossom was only about four months old, and mother Blair was not even a year old. No one knew how they ended up wandering around the park, but they couldn’t stay there. They were both so wary of people that the only way to rescue them was to humanely trap them.

When trap-neuter-return (TNR) isn’t an option

"Ideally, cats like Blair and Blossom would be part of a trap-neuter-return (TNR) program,” says Jenn Corsun, manager of Cat World. TNR programs are designed to trap community (feral and free-roaming) cats, spay or neuter them, and then return them to where they were found. That keeps the community cat population low, while still allowing the cats to live peaceful lives.

Because the cats were found in a national park, releasing them was not an option. “We needed to come up with another solution,” says Jenn. “While bringing cats from this type of situation to the Sanctuary is not the best option, sometimes it cannot be avoided.” 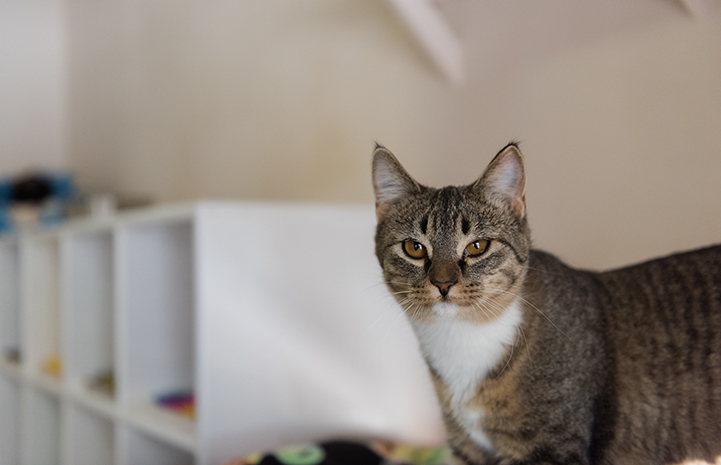 That’s how this feline family of two made it to Cat World, where they received some routine medical care; however, what they really needed help with was socialization. They were well beyond shy. Blair and Blossom were terrified of people and tried to avoid them. If anyone came near, they didn’t hesitate to ask them to back off by hissing.

Their hermit-like behavior wasn’t an act. But now that they were at the Sanctuary, they would have the best chance for a happy and fulfilling life — if they could learn to be comfortable around humans and (even better) if they could eventually learn to like people.

Both cats had the potential to become loving pets. They just needed time to settle in at the Sanctuary and learn that their caregivers meant no harm and could even be their friends. How much time that might take would depend entirely on them. After all, it’s not easy for cats to transition from living a solitary life and being wary of everyone, to living happily around people. For some, it can be a steep learning curve. But Cat World caregivers have had plenty of past success luring these “cat turtles” (shy cats who hide and take their time coming out of their shells).

Adopt a ‘cat turtle’ for free in November 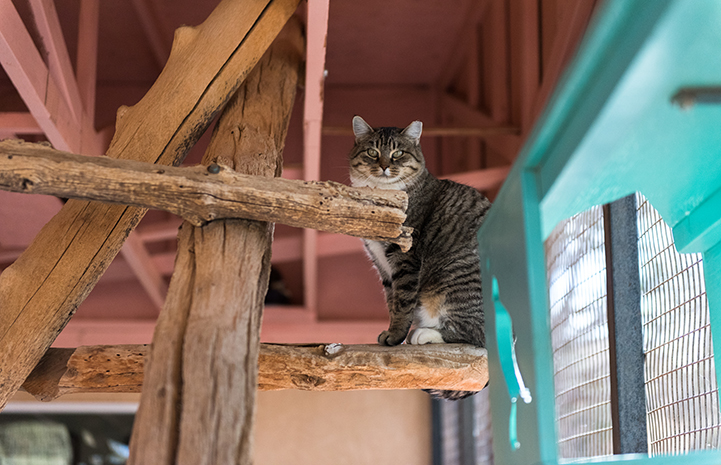 From ‘cat turtle’ to friendly kitty

As a first step, Blair and Blossom went to live in different areas of Cat World. Jenn says that’s because separating withdrawn cats who have been living together can sometimes help them come around faster. Instead of depending on each other for all their social needs and continuing reclusive behavior, the cats start looking outward. This gives them the chance to befriend other cats capable of modeling more social behavior with people, or prompts them to start looking to people for friendship.

Being so young and unsocialized, it was possible that Blossom had never been handled by people until she was found. But because she was also the more impressionable of the two, it didn’t take her long to stop avoiding her caregivers. In just a few short months and with plenty of attention from Cat World caregivers and volunteers, she’s gone from frightened to a friendly and sweet little cat, who lets perfect strangers stroke her soft, tabby-and-white fur. 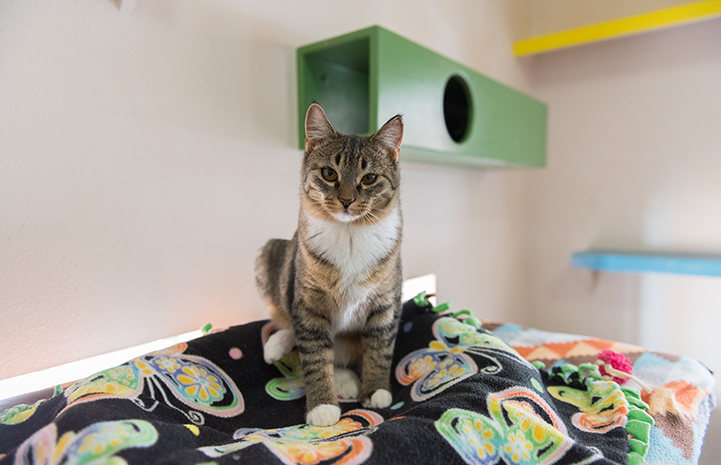 Blossoming at a turtle’s pace

Blair, on the other hand, has needed a little more encouraging than her kitten. She’s a lot more cautious than Blossom, and she likes to hang out in the rafters with another shy cat she’s befriended. But all signs are pointing to a turnaround for her, too. Lately, she’s been making a habit of climbing down from the rafters to lounge in a big cat tree in the outdoor catio.

She’s even becoming more relaxed and less likely to leap back up to her hiding place when caregivers buzz around doing their daily chores. And she’s learning from watching how other cats react to people.

Recently, Blair watched a volunteer sit quietly and hand out treats in the catio. As a crowd of cats gathered around the volunteer, Blair became curious, climbed down to the floor about 12-15 feet away, stretched out, and rolled over on her side. It was a promising sign, because while it may happen at a turtle’s pace, the day will come when Blair will blossom into the easygoing, social cat hidden inside. 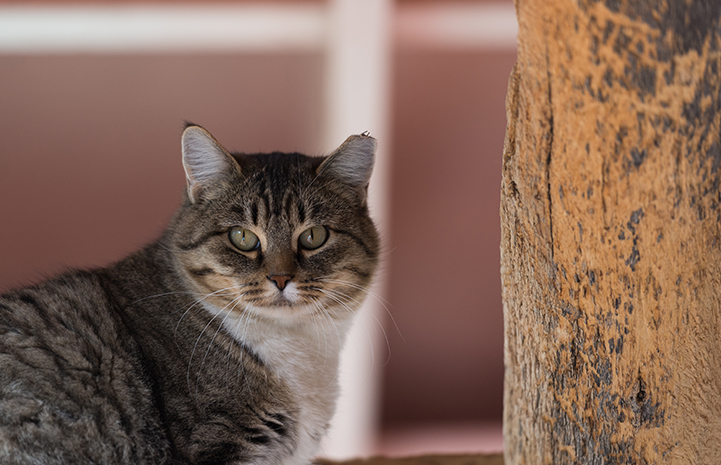