Image
Class for shy dogs at Best Friends helps animals who need a little extra encouragement to be social. Treats are given out to motivate the dogs.
By Christelle L. Del Prete 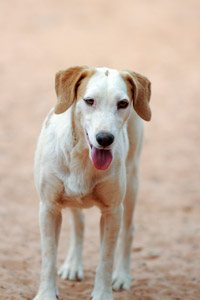 Zena stands in the middle of the room with her tail tucked so tightly under her belly that it’s hard to see she has a tail at all. Rescued from a hoarding situation nearly two years ago, she’s readjusting to being back in school after a few weeks’ break. The “classroom” is in one of the octagons in Dogtown. Every Saturday morning, caregivers and volunteers seat themselves in a big circle and hold out treats to some of the shyest dogs at the Sanctuary. Zena’s got one eye on those treats, and the other trained on the door, as if contemplating whether to give in to tasty temptation or to make a break for it.

Zena is one of six dogs in the current group. The class has rolling admissions: dogs join at caregivers’ and trainers’ discretion, and stay as long as they need to until they graduate or get adopted. That means every dog is in a different place of progress on the shyness scale. Sinatra, a clever blue-eyed dog, knows how to work the crowd so well he hardly seems shy at all, while Riddle, a sweet black Lab mix, sits in a corner, avoiding eye contact.

There are no grades in this class, and progress is measured on an individual basis. It’s a really big deal when Riddle ventures out of his corner in a few tentative steps. And Zena “wins” every time she decides to stay in the circle and stretch her neck forward to gently take a treat from someone. She may not yet be as bold as Vienna, a chow mix who will plant her three short little legs and take several treats at once. But Zena’s made some significant breakthroughs.

“She’s one of the longest-term members of the group, and she started changing a few classes ago,” Dogtown caregiver Jess Cieplinski explains. “This is the third class where she’s moving around and not just hanging out by the door or standing frozen in one spot.” At first, Zena would only take three to five treats per session. Now, she takes that many within the first few minutes. 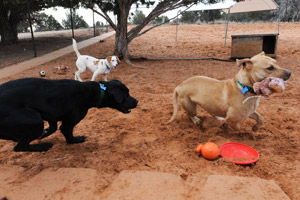 Of course, the goal of shy dog class is to help the dogs bring their newfound confidence into their everyday lives. When Jess first began working with Zena last July, she would place Zena’s food in a bowl on the patio and walk away. As soon as Jess was gone, Zena would sneak up from the back of her run, snatch up the food, and dash away again. Eventually, she was comfortable enough to eat in a crate in her indoor room rather than outside. Then Jess began leaving the crate door open and placing the food bowl just outside of it. During each feeding, she moved the bowl away a little, and Zena crept out farther and farther to reach it. Finally, she was eating indoors, but outside of the safety of her crate. From there, it was a quick transition to get her eating out of caregivers’ and volunteers’ hands.

Her increased confidence means that Zena is able to enjoy even more social opportunities. When class is dismissed on a sunny Saturday, she hits the trails with a pair of volunteers. No longer such a shrinking violet, Zena is working her way to full bloom.