Being part of the Best Friends No More Homeless Pets Network gives animal welfare groups all across the country the tools they need to save more lives and the chance to work together to Save Them All.

Best Friends has network partners in every single state, and all of them are saving lives daily. We never get tired of hearing their stories, and that’s why we want to share them with you, too. So today, we're proud to present one from Rocky Mountain Cocker Rescue in Parker, Colorado.

How could anyone resist a cocker spaniel who loves giving kisses, leaving no nearby hand or leg un-smooched? Though, despite Ted’s overwhelming love for everyone, this teddy bear of a dog lost his home when he was 13 years old.

Luckily, Ted was rescued by Rocky Mountain Cocker Rescue (RMCR) in Colorado. And with a little help from Best Friends, he soon had someone to whom he could give all that love.

Senior dogs are the best, but when they lose their homes, it can sometimes be tough for them to find love again. In fact, when they end up in shelters, their lives are often at risk due to minor medical challenges or the struggles in getting old, such as hearing loss or blindness. But with a bit of time and care, they can end up with just the right loving family in a home where they can spend their golden years (or maybe their buff years, since we are talking about cocker spaniels and buff is their most common color).

That’s why Best Friends presented grants for three years in a row to Rocky Mountain Cocker Rescue. The grants have enabled the organization to find homes for more than 20 senior dogs, who are now soaking up the good life in their new homes. 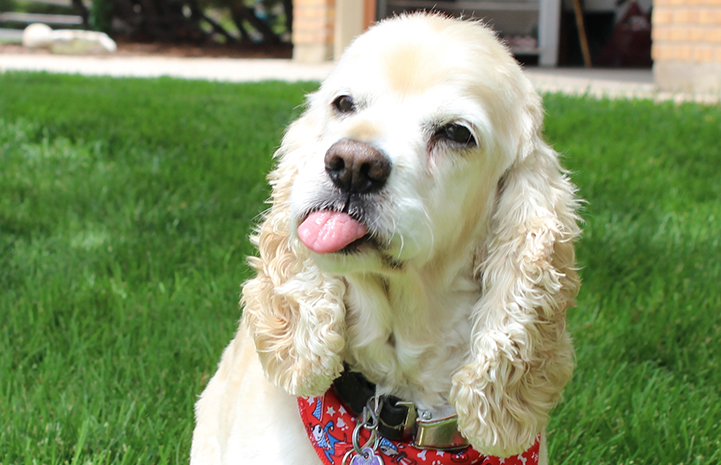 As a Best Friends No More Homeless Pets Network partner, RMCR was eligible for financial aid to help find homes for dogs like Ted through its “Seniors 4 Seniors” program, which matches older dogs with older people. The funds offset adoption fees, making it possible to adopt an animal for very little cost.

“Senior people are often on a fixed income and we would rather they spend their money on high quality dog food,” says Kathryn Glass, founder of RMCR. “And when we can offer a discounted senior rate, we've seen people perk up and seriously consider adopting older dogs. It’s a win-win.”

It certainly was a winning situation for Ted.

Veterinary care for a cocker spaniel

When he lost his home, Ted needed something positive in his life. Despite the considerable challenges facing him, he just kept on giving kisses to everyone he met — like he always had.

RMCR accepted him from a family with a new baby, where Ted was unhappy because he didn’t get all the attention he once had. When Ted first arrived, Kathryn (who provided his foster care) was worried that his poor health and limited mobility due to arthritis could not be treated — a situation that might force caregivers to face the heartbreaking decision of euthanasia.

“We took him to the vet for a thorough exam and lab work,” says Kathryn. “Nothing was wrong that couldn't be healed with time and the right medications.”

Anti-inflammatory and pain medications were prescribed for Ted, and over the next few months they made his limp less noticeable. Eventually, he was able to go up and down stairs without assistance. And over time with good food and healthy supplements, his coat filled in beautifully and became soft and shiny.

Once he was in good shape again, the only thing needed was a home.

While he was feeling better than he had in a long time, Ted wasn’t getting any younger, and that worried Kathryn a bit. “I was convinced he would be a permanent foster with me, since no one adopts a 13-year-old dog at the end of his life span,” she says. But then, someone came along who convinced her otherwise.

When Trish Goodrum inquired about adopting Ted, Kathryn made sure the potential adopter knew of the dog’s advanced age. “I made sure she realized that a cocker spaniel’s typical lifespan is about 14-16 years,” she says.

Trish still wanted to meet Ted, and when she arrived and sat down to pet him, sure enough, Ted showered her with kisses. Trish had recently been through a divorce, so Ted became the perfect friend to help her through a difficult time.

More than a year later, Ted is still happy in his home, getting pampered and loving every minute of his golden years. He most often goes by his nickname: Muffin. And now his best friend is a cat named Winslow.

In the past three years with the help of Best Friends grant funds, RMCR has placed more than 20 senior dogs like Ted into homes. “These are dogs who would most likely still be in foster care,” says Kathryn. “Senior dogs know they’ve been given another chance at love and they give it with their whole hearts. What more could we possibly ask?” 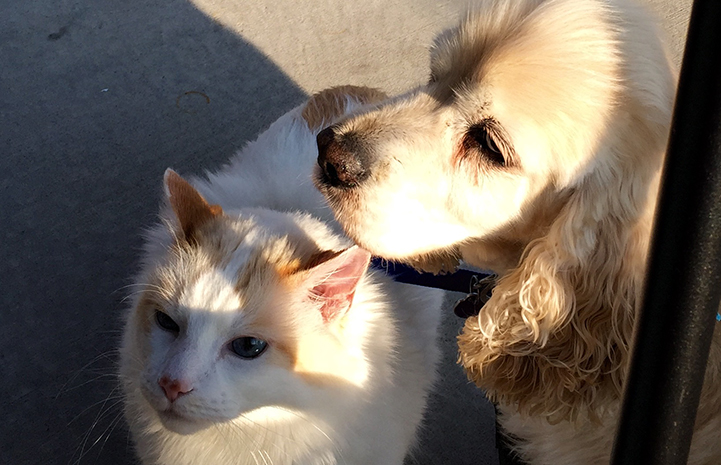 Editor’s note: After Ted’s story was written for Best Friends magazine, we learned that he passed away near the end of 2016. He was able to enjoy life for more than a year in his new home with Trish.

Best Friends’ No More Homeless Pets Network comprises more than 1,700 animal welfare groups from every single state, all working to save the lives of pets in their own communities. Ranging from animal shelters and rescue groups to spay/neuter and trap-neuter-return (TNR) organizations, network partners collaborate with Best Friends to save even more lives in every corner of the country. Best Friends provides marketing help, fundraising events, information and webinars, guidance, grants and more, so that, together, we can Save Them All.