Image
Senior dachshund dog gets medical treatment for severe dental disease, a liver infection, a benign mass, and a heart murmur, and is then adopted.
By Nicole Hamilton

From the first moment Brittany Joy Drew saw Pepsi — a little senior dog at the Best Friends Pet Adoption Center in Atlanta — her heart went out to him. He’d lost his home and ended up in a shelter with some serious medical challenges. “I just sat with him and held him for about an hour because I was trying not to cry,” she says.

Pepsi came to the center from LifeLine Animal Project, a Best Friends Network partner organization that manages the Fulton Animal Services shelter. The busy county facility takes in dozens of dogs every single day. It wasn’t the right place for Pepsi to get the extensive medical care he needed. And it wasn’t a place where he’d have time to recover in safety and comfort so that he could be placed up for adoption.

Best Friends in Atlanta focuses on helping metro area county shelters with the most need; so, after staff at LifeLine reached out for help with the sweet senior dog, he was soon on his way to the Best Friends Pet Adoption Center.

Learn how Best Friends is helping the U.S.
become no-kill by 2025

Pepsi arrived with a large benign mass that needed to be removed, along with severe dental disease, a liver infection and a heart murmur. “He felt miserable, and it showed,” says Kathleen Delaney, the center’s intake coordinator. 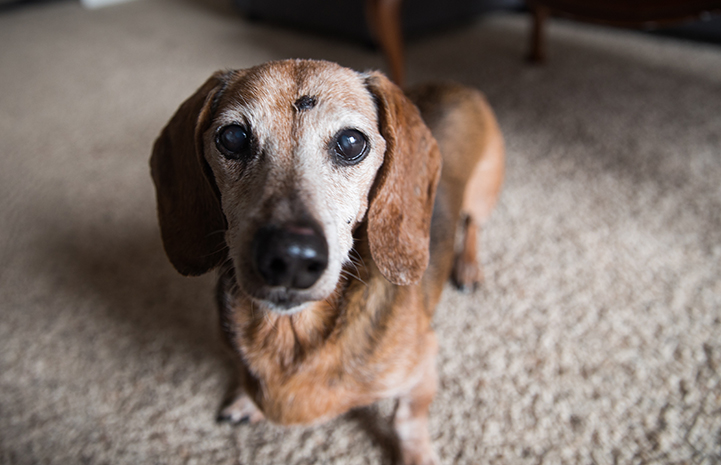 The sweet silver-faced Pepsi went to live with a foster family that cared for him for two months while he was treated for the liver infection. When Pepsi was healthy enough, he was given a thorough dental cleaning and underwent surgery to remove the mass.

Because of the medical help and TLC received in the foster home, Pepsi blossomed and thrived. Soon he was ready to return to the center to find his home — but not before he won the hearts of the staff and volunteers. 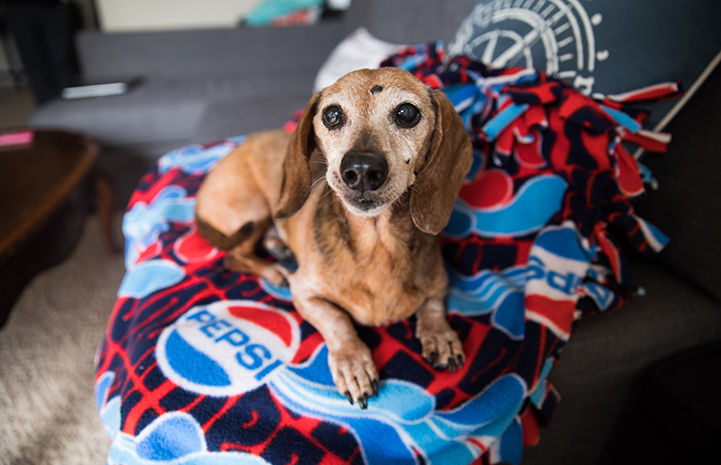 “He has always been a favorite,” says Kathleen. “He’s mellow, sweet, calm, just a love bug and lap dog in every sense of the word.” It wasn’t long before Brittany met Pepsi at the center and fell in love, too.

A Georgia Tech graduate student studying to help pediatric cancer patients, Brittany is no stranger to stress. She was looking for a best friend to keep her company during her studies. She first saw Pepsi on the center’s website, and when she met him and learned more about his life, she knew she wanted to give him a home. She also liked that he could fit perfectly in her lap while she studied. And she liked that he was a senior without lots of puppy energy. 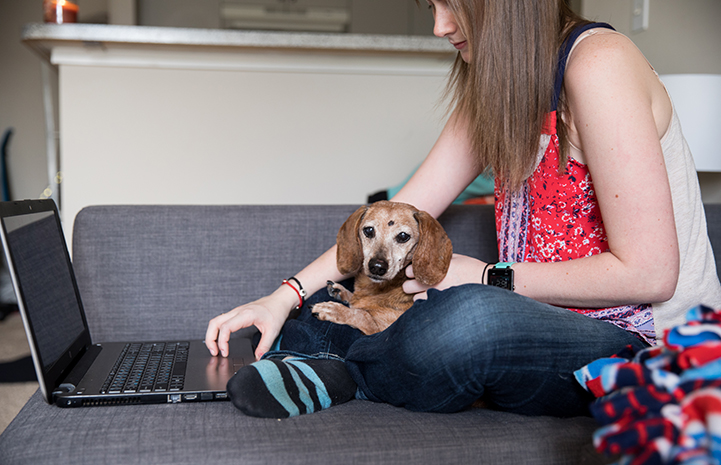 She adopted Pepsi and as he settled into his new home, he surprised her with his mischief.

Pepsi makes himself at home

Brittany estimates it took about three days for Pepsi to make her apartment his home — and maybe less time to make himself at home in her heart. He soon became just as attached to her as she was to him from the moment she met him. 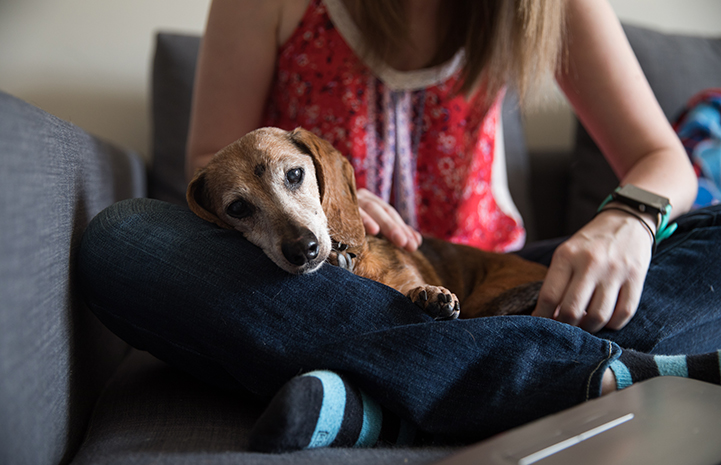 Over the course of the past month, Pepsi has shown that just because he’s old, it doesn’t mean he can’t learn new things. For example, he’s figured out how to get into the bags with his treats. He is also a champion cuddler. “At night time he refuses to settle down and go to sleep unless I am holding him,” she says. “Then he stays right next to me all night until morning.”

Pepsi also likes to sleep in until Brittany comes home from classes. Then it’s time for hours of sunbathing on the balcony. “He is definitely not a morning dog,” says Brittany. At night after Brittany finishes her homework, the two cuddle up together on the couch and watch TV. 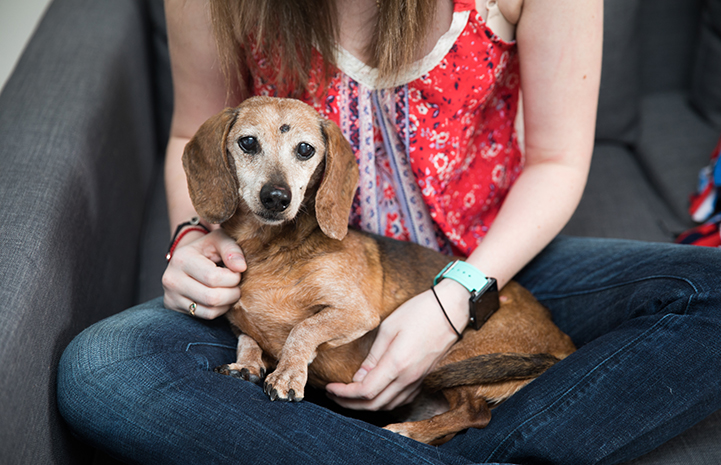 Pepsi: a reminder of how special animals can be

Brittany says her life has changed dramatically since she’s adopted Pepsi. “He has brought so much love to me and my life,” she says. “I find myself able to apply myself more to school, as well as just having more energy on a daily basis because of the joy he brings.”

Brittany says from now on — when it comes time for her to adopt another dog — she will look at senior dogs first.

“A part of me strongly believes that I needed to adopt him more than he needed me,” says Brittany. “Pepsi is full of love, happiness and brings a smile to anyone he meets. He is such a great reminder of how special animals are and how important it is to love them.” 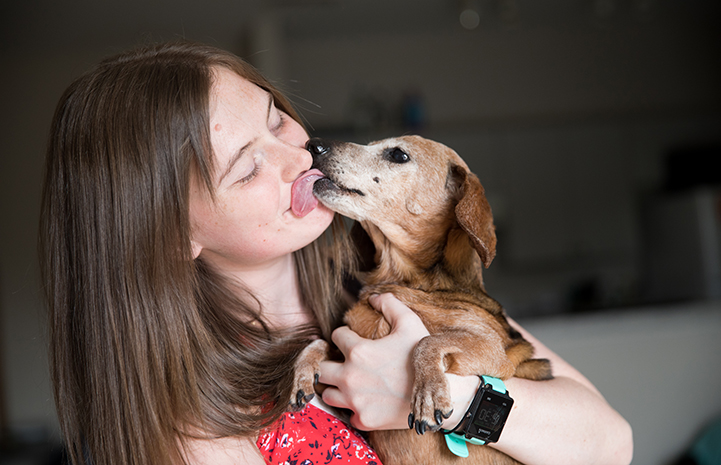