Presley the terrier mix dog is a little bit older and not exactly spritely thanks to her polyarthritis symptoms (arthritis in multiple joints), but her person, Emily Davila, says adopting her was the best decision she could have made. Every day Emily gives Presley medication to provide joint pain relief and keep her body as mobile as possible. She lifts her up onto the bed to sleep together at night. But Emily says she’s even happier than she dreamed she could be after adopting a dog.

And to think that if she had arrived at the Best Friends Pet Adoption and Spay/Neuter Center in Los Angeles one minute later, their story would be very different. 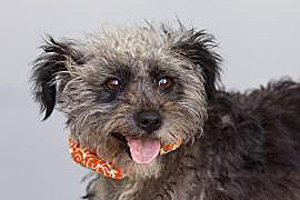 All dogs and cats at the Best Friends adoption center come from Los Angeles city shelters, and they’re usually adopted quickly. But Presley, a little dog who’s the perfect size for laps, has autoimmune polyarthritis, which means her whole body is a little stiffer than the average senior dog.

Because her illness also compromises her immune system, an environment with many other animals around wasn’t the best for her. She needed to stay someplace a little less loud and busy. So Presley went off to one of Best Friends’ volunteer foster homes.

“Having foster homes willing to take in special-needs animals gives us a chance to get them healthy and ready for adoption, which is much harder to do in a shelter-type setting,” says Elizabeth Pashley, Best Friends–Los Angeles foster program coordinator. “We are so grateful to have foster families willing to take in dogs like Presley, so that they can find amazing homes.”

Even so, Presley’s canine polyarthritis scared off potential adopters. People would see her adorable face online and come in to ask about her. But as soon as they heard that joint pain in dogs required daily medicine, they’d change their minds.

Their loss would eventually be Presley’s gain.

A matter of timing

Emily had been looking at dogs available for adoption on the Best Friends–Los Angeles website. She knew she was ready to bring one home and had picked a couple who looked promising. Among them was Presley. So she and her mom headed off to the adoption center.

But when they walked in, there was Presley getting ready to walk out with someone else.

“She looked so happy and was so good on leash,” Emily says. “Even though I had a few dogs picked out to meet, as soon as I saw Presley and thought she was adopted, I was so sad.”

Emily says she realized that very moment that Presley was the one. Her heart broke on the spot. So her mom decided to investigate things and asked Presley’s handler if she had, indeed, adopted her.

It’s a good thing she did because it turns out the person wasn’t adopting Presley; she was only taking her home to foster her. Presley had come to the center that particular day just long enough to make the switch from one foster home to another. 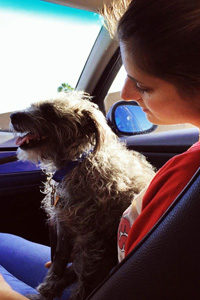 Emily jumped at the chance to meet the little happy-go-lucky dog. “She was so good and sweet and adorable,” she says. “I couldn’t understand why she hadn’t been adopted yet.”

That’s when she learned of Presley’s medicine needs. And, finally, Presley had met her match. “Emily and her mom asked lots of great questions about dog joint pain in general and Presley’s condition and what it required from them,” says Elizabeth. “It was pretty clear Presley’s medical issues weren’t a deterrent for them.”

Emily says Presley immediately settled in at home, as if she’d been there all along. And she gets to have play dates with her mom’s two dogs.

“I knew adopting a dog would be great,” says Emily, “but it’s been so much better than I ever imagined.” Even when Presley wakes her up, sometimes before the sun, with yips and barks. Emily pets her until she falls back to sleep.

“I wish people wouldn’t be afraid of adopting an animal who needs a little medicine or extra care,” she says. “It’s really not that big of a deal and those animals are the ones who need you the most.” And you might even find that you need that pet just as much as she needs you.