Image
When Princess Potato appeared on the finale of Animal Planet's "Give A Dog A Home: Live!" she captured her new family's hearts
By Nicole Hamilton

Cheyenne and Christian Lamprecht were enjoying a typical night at home, lounging in front of the television, when they saw a smile on the screen that would change their lives. The owner of that mile-long grin was a dog named Princess Potato. The brindle pit bull terrier mix was making her television debut on the season finale of Animal Planet’s “Give A Dog A Home: Live!.” The show, which aired twice a week for several months at the end of 2019, featured adoptable pets from Best Friends locations around the country.

It was pure luck that Cheyenne and Christian tuned in from Atlanta, because Princess Potato happened to be at the Best Friends Lifesaving Center in Atlanta. After the watching the show, Cheyenne grabbed the TV remote and replayed the Princess Potato segment over and over again. 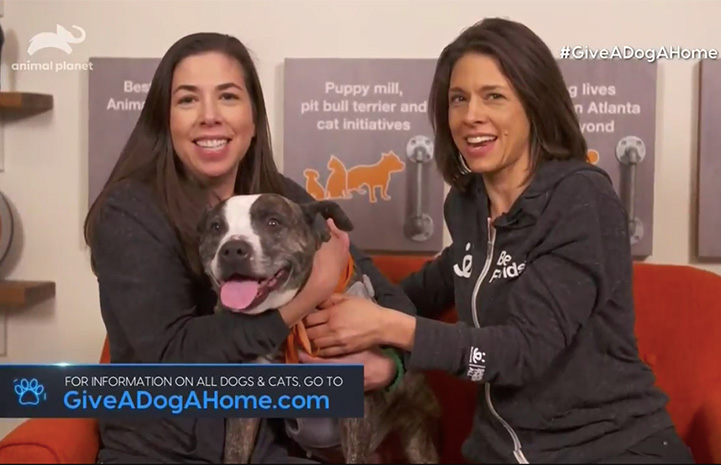 Princess Potato came to Best Friends when she was about nine years old after losing her home and ending up in a large Atlanta shelter. From the day she arrived, she bestowed her kindness upon everyone she met. She was a gracious kennel mate, loved meeting kids and at times could be a little stubborn. Kristen Sugg, communications manager for Best Friends in Atlanta, says the team found her stubbornness more endearing than anything else. “She definitely has a mind of her own,” says Kristen. “On walks, she liked to hold her own leash.”

She also had a few medical problems that potential adopters needed to know about. She had arthritis, and kidney disease made it difficult to hold her bladder. The medical team prescribed medication and a special diet to help manage her kidney issues, and soon it was obvious that Princess Potato was feeling much better. On most days, you could find the princess holding court at the front of her kennel, flashing her signature grin at everyone who walked by. It was the same grin Cheyenne saw on television — just long enough to make up her mind. 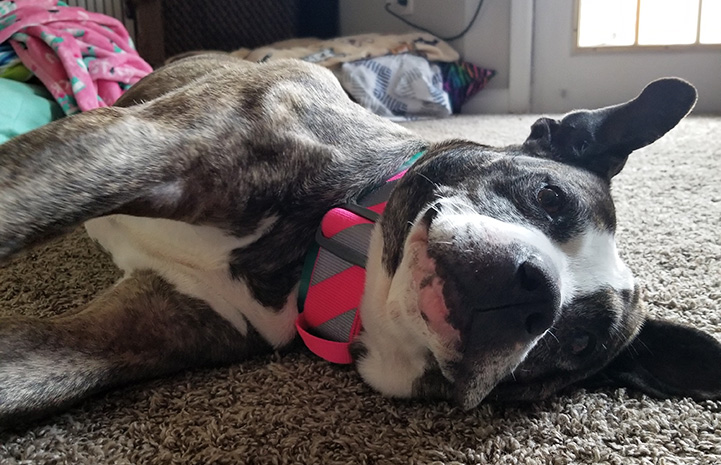 Cheyenne and Christian had been thinking about adopting a second dog for a while, and every time Cheyenne pressed “play,” she grew more convinced that Princess Potato was the one they’d been looking for.

“I probably watched her six or seven times,” says Cheyenne, who first thing the very next morning hopped in the car (along with Christian and Punkin, their Chihuahua), to go meet Princess Potato in person.

You could say what happened next confirms that love at first sight is real. “You know when you like a person you just met? That's how it was with us,” says Cheyenne. “We just clicked.”

The fact that Princess Potato had some health challenges (namely arthritis and kidney issues that can lead to accidents and require a special diet) only made Cheyenne and Christian want to adopt her more. 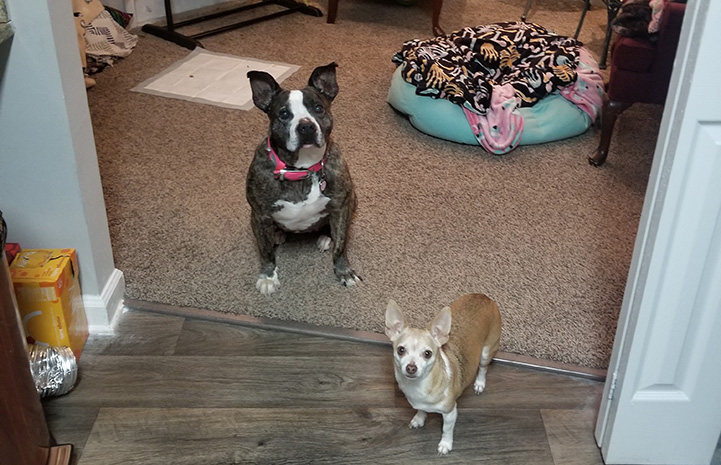 An opportunity to celebrate every moment

Cheyenne says Princess Potato fit into her new home from the first day she arrived. “She’s such an easy doggo, so it wasn't difficult at all for her to make herself part of our family,” says Cheyenne. “She's got such a laid-back personality. She’s cool with anything, and we're starting to really see the real girl underneath.”

A dog who dances

“She's living the good life now,” says Cheyenne. “She has so many dog beds, blankets, and toys to choose from and she’s acting like she feels better. She even dances around and wants us to play with her stuffed animals sometimes.”

Cheyenne works from home as an artist, so she’s able to stagger the princess’ water consumption every hour to make sure she stays hydrated. Princess Potato is also on probiotics for digestive support and loves the carob muffins Cheyenne makes just for her. At night, Cheyenne puts down potty pads in the guest bathroom that doubles as Princess Potato’s bedroom so that, in case of an accident, she stays comfortable.

During the day, Princess Potato wears little bloomers around the house, and while  Cheyenne could see this as a burden or a reminder of her dog’s health issues, instead she considers it another source for joy. “It's fun trying to put on her pants when that tail never stops wagging,” says Cheyenne.

Since the family lives in a second floor apartment, Cheyenne and her stepdad are building a grass garden on the porch, so Princess Potato can go potty during the day without having to walk down the stairs. Of course, when they do venture out for a walk, Princess Potato still likes to carry her own leash. 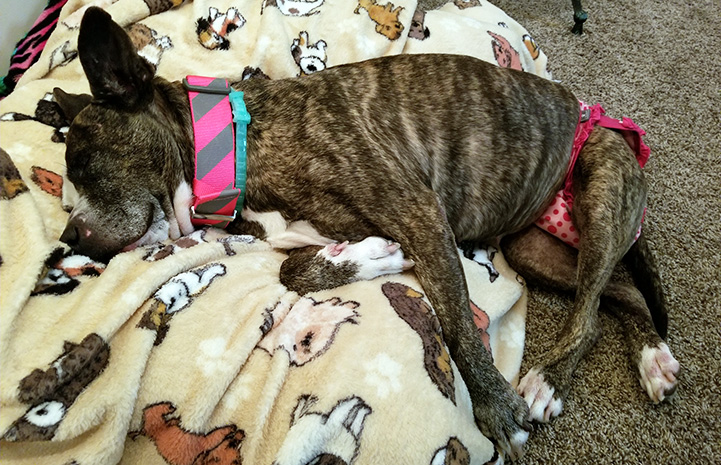 The queen of happiness

With kidney disease and arthritis to boot, you’d think Princess Potato wouldn’t always feel up to living life to the fullest. But Cheyenne says it’s quite the contrary. “She is just so happy. Her tail never stops wagging and her smile never goes away, and she's always up for love and cuddles.”

Princess Potato is also a master in the art of not taking anything too seriously. In fact, sometimes she gets wiggly and starts rolling around gleefully on the floor while everyone laughs and applauds. And while she’s a princess who loves her beauty sleep, she never gets upset when Cheyenne wakes her.

Princess Potato has also opened Cheyenne’s eyes to how rewarding it is to care for a pet with special needs. In fact from now on, Cheyenne and Christian are planning to only adopt dogs needing extra care. “I'm definitely ready to smother another dog like her with love and affection,” says Cheyenne. “She’s taught us to be happy and how to take on the day with fresh eyes and a big smile.”