Senior German shepherd receives the gift of a new home

Image
After ending up in an LA animal shelter, a senior female German shepherd was very frightened, but now adopted into a new home, she is flourishing.
By Nicole Hamilton 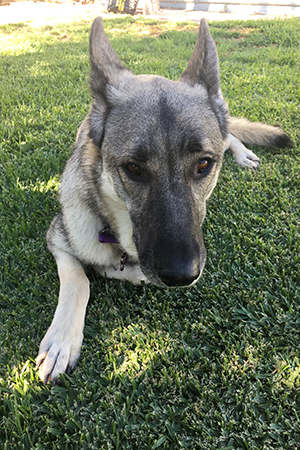 Sienna isn’t a dog who opens up easily. She has to get to know you and feel safe before she lets you in. But once she can trust you, she’ll not only be one of most gentle dogs you’re likely to ever meet. She’ll also be your friend for life.

It’s perfectly understandable that Sienna is tentative of the world around her. The seven-year-old German shepherd waited patiently a long time at the Best Friends Pet Adoption and Spay/Neuter Center in Los Angeles. Along the way, she met several people who might want to adopt her, but it just didn’t work out. After a while, she might have thought that she’d never have a home of her own again.

Tom Smyczak, one of Sienna’s caregivers at the center, didn’t lose hope, though. The longer Sienna waited for the home she deserved, the stronger his resolve was to help her shed her fears so she could more easily meet potential adopters. Staff members at the center knew that the right family was out there for her, and that with a little time, they would find that family.

A big dog with big fears

When Sienna first arrived at the center from the Los Angeles Animal Services municipal shelter where she’d been surrendered to the shelter by her former family, she was so frightened that she wouldn’t let anyone come near her. “She was really shut down,” says Tom. “She’d just cower in the corner shaking — making it hard for anyone to help her.”

Tom decided to take on Sienna as his special project. So he patiently watched for her to let her guard down — simply waiting until she felt safe enough to let him pet her. Eventually she took a big risk and followed Tom out to the yard to play. And once she knew there was no need to fear him, Sienna became Tom’s loyal friend.

“Some people called her my girlfriend,” he says. “I can see why. We were attached like Velcro.” That was a start, but Sienna still needed to feel more comfortable around new people, because if she didn’t, it would be hard for her to be adopted.

So much of the work Tom did with Sienna was to help her relax around strangers. “It was important to make sure her fears didn’t define her,” says Tom. “I wanted people to see Sienna for who she really is — a very sweet and loyal dog,” 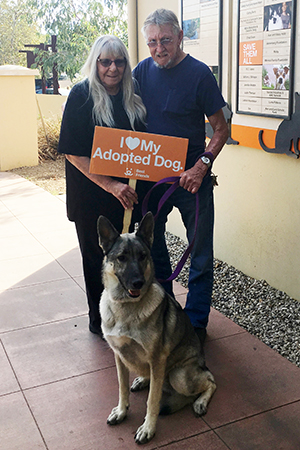 Susie and Bill Hoffman were looking on the Best Friends–Los Angeles website when they came across Sienna’s photo and story. In their 70s, the couple wanted an adult dog who would do best in a quiet home without other pets, and would be patient enough to walk slowly alongside them. Basically, they were looking for Sienna.

Adoption specialist Michelle Flitcraft will never forget the day the couple contacted her to set up a time to come over and meet the dog. She knew this could be the special moment that Sienna had been working so hard for.

When they arrived, Michelle watched Sienna walk right up to them and let them pet her without hesitation. That’s when she knew she was watching something very special.

“It was such a perfect moment,” says Michelle. “For the first time, I saw Sienna calm and happy with people she had just met. She just needed to find adopters who really understand her.”

She certainly had found them. Soon, the senior German shepherd was on her way home with Susie and Bill.

Once-scared dog now safe and secure in her new home

Today, Sienna spends her mornings relaxing in a quiet back yard at her new home, located in Southern California horse country about an hour away from the center. Later in the day, she goes on long walks with Susie and is learning how to walk slowly — or as Susie puts it: to do “the old lady shuffle.”

Now that she has a home where she can relax, each day Sienna deftly faces scary things — like electric doors, hand-held vacuums and the microwave. And when Sienna gets scared, Susie and Bill stay patient and encourage her to remain calm. They also make sure to keep loud noises to a minimum, and have created places in the home where Sienna can hide if she needs a break.

Most important of all, Susie and Bill are showing Sienna that the loyalty she gives them is mutual. Sienna had lost a home before, and they want her to know that won’t happen again.

“It’s natural for her to be wary of us, because she’s not sure we’re going to stick around for her,” says Susie. “But we’re not going anywhere. This is her home, and we love her.”

Honor someone special this season