Senior German shepherd with separation anxiety and other fears

Image
Senior German shepherd with separation anxiety and a fear of thunderstorms and fireworks gets help and then is adopted into a forever home.
By Christelle L. Del Prete

When Chieftain came to Best Friends Animal Sanctuary right before the Fourth of July this year, Dogtown caregivers knew it might take a little work, along with some time, to find and get him ready for his perfect home. Here was a 10-year-old, 90-pound German shepherd with severe separation anxiety, who missed his family. To top it off, it was his least favorite time of year.

Chieftain was terribly afraid of fireworks. That, combined with some destructiveness related to his separation anxiety, contributed to him losing his previous home. In fact, his anxiety was so bad that a trainer had actually suggested he be euthanized. But his people refused to give up on him, and eventually Chieftain found his way to Best Friends. 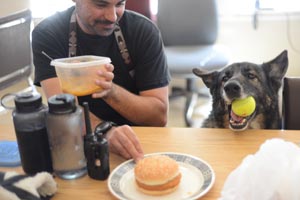 Safe spot for dog when stressed or anxious

Once he arrived in Dogtown, Chieftain made it very clear — by chewing through a fence and a doggie door — that he needed a quiet room where he could feel safe in times of stress. It took some trial and error, but Dogtown caregivers found a safe spot where he could go during scary events like fireworks and thunderstorms. They also found for him two great roommates who just happened to be shepherds like him.

But Chieftain’s very favorite place in Dogtown turned out to be the staff lunchroom. He got to hang out there with his caregivers a few times each week, which, as a food hound, he thoroughly enjoyed. He even found his voice, and became rather demanding if no one shared any goodies with him.

To distract him from the food, his caregivers offered him something he would come to love even more — tennis balls. Then, instead of begging people for their lunches, Chieftain would make them laugh by chasing the ball all around the room. 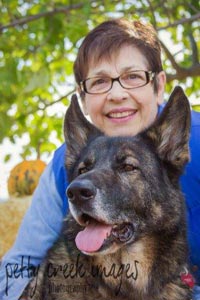 Chieftain had settled into a good routine and had started to relax at the Sanctuary. But his caregivers knew he’d be happiest in the right home — one where he would feel safe. They really hoped he would find it someday, but just couldn’t have imagined it would come along so quickly.

“Luckily for Chieftain,” explains adoption specialist Jessica Harrington, “the very first application that came in for him ended up being the best home we could have asked for. (The adopter) was looking specifically for a large, senior German shepherd, and since she runs a rescue out of her home, she would be with Chieftain 24/7."

Chieftain now enjoys hiking and running around on two acres of land in Montana. His adopter, Leslie, says: “He is doing fine and starting to realize he is home. He is precious. I just love him so much!”

To help more animals like Chieftain go from homeless to home, become a Best Friends member.