Separation anxiety no match for this hound’s happiness

Image
Hound and terrier mix dog suffers from separation anxiety, but he is improving and getting more confident.
By Christelle L. Del Prete 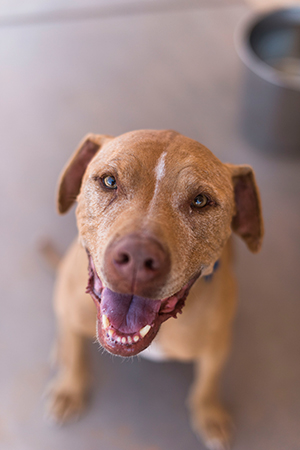 “The doctor will see you now,” Doc seems to say as he puts both feet up on the reception desk to greet new visitors. But being greeted by this happy hound and terrier mix is far more fun than a trip to the physician.

Doc is thrilled to meet new people every day, and that makes him excellent at his job as a Dogtown volunteer greeter. The job is part of a whole new lifestyle for the sweet senior, and it has helped transform him from a sad, anxious dog into one who greets each new day and each new volunteer with a big grin on his face.

Doc wasn’t having any luck finding a home before he came to the Sanctuary. The poor guy had a list of things standing between him and his happily-ever-after, including allergies that required medications and a special diet. He’s also nine years old, picky with his doggie friends and can’t live with cats. On top of all that, symptoms of severe separation anxiety have turned up by a few notches the challenge of finding him a home.

When left alone in his kennel at the adoption facility where he lived before coming to Best Friends, he would howl and bark nonstop. After he came to the Sanctuary, he made it clear that he didn’t care much for alone time in Dogtown, either. Though he had a large room and a yard with people and lots of other dogs coming and going all day, he was nervous and unhappy whenever his caregivers weren’t right there with him. He would bark loudly and run frantically back and forth, both of which were stressful and exhausting for him.

Helping a dog who doesn’t like to be alone

Doc’s concerned caregivers tried a different approach. Since he is a sweet soul whose only wish is to be with people all the time, they found ways for him to do that. Doc began going to Dogtown headquarters during the day to hang out with the volunteer coordinators and to help them check in volunteers.

Doc also became a frequent flier in Dogtown’s sleepover program, going “home” with volunteers almost every night. Because every person who volunteers in Dogtown begins by checking in at the front desk, they all get a chance to meet Doc. And because he’s so charming, it’s extremely rare that at least one volunteer each day doesn’t sign up to make him their cuddle buddy for the evening.

In the mornings, Doc returns to work well rested and ready to go. In between the busy check-in times first thing in the morning and right after lunch, he takes naps in his bed at the volunteer coordinators’ feet. On breaks, he likes to walk around Dogtown carrying his favorite stuffed toy snake. 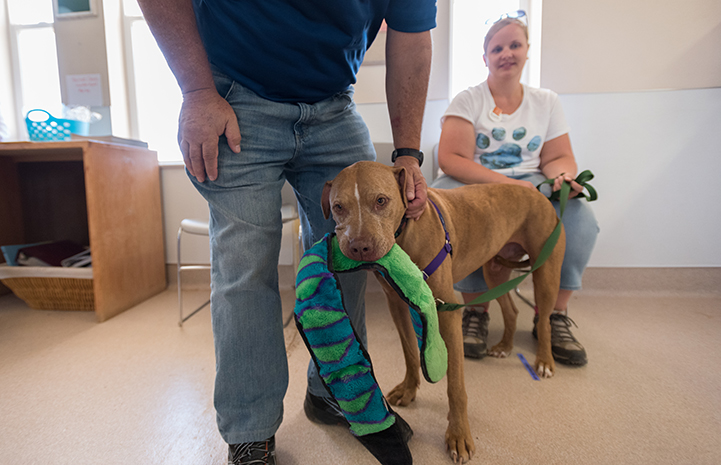 Because he’s become so popular, Doc enjoys visits from his many friends and fans around Dogtown and on the maintenance crew. And, boy, is he ever excited when he sees a returning volunteer. His tail starts wagging a mile a minute when he recognizes a friend, especially someone he’s spent some snuggle time with.

Since he became a volunteer greeter and a sleepover king, Doc’s outlook on life has changed. You can see the happy light in his eyes every time he steps up to say hi to someone. Of course, Doc is hoping that, one day, “hello” will turn into a forever home with someone who can be there for him full time. Until then, he’ll spend his days welcoming newcomers to the Sanctuary, and his nights snuggled up under the covers with a new friend or two. And that’s just what the doctor ordered for him. 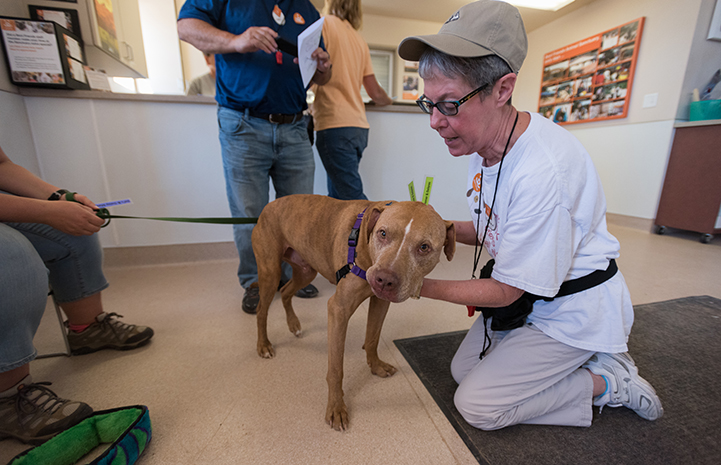