Image
Information about Shadow the Vicktory dog, who was rescued from Michael Vick's fighting ring, from adopter Susan.
By Best Friends staff

More about Shadow from adopter Susan:

What has surprised you most about Shadow who was rescued from Michael Vick's fighting ring?

Despite the devastating psychological pain that Shadow was still suffering when we adopted him, he was still so gentle. He didn't know how to handle the love and affection we immediately began to shower on him; he seemed confused by it. We didn't know how badly his spirit had been broken. Best Friends had done its magic, but he still had a long way to go. We had already arranged for a dog trainer to help us work with Shadow. He had basic obedience training, and Dee helped us capitalize on that to teach him how to jump up, give five, go through thresholds, and do other normal doggie things - but he has to be bribed with a treat. But when he learned it, he was so proud of himself and was having such a great time; it was wonderful to see. He is just so lovable. We love to cuddle him, and he appears to enjoy it, but he still trembles sometimes, which makes us sad. The good thing is if we hold him tightly and encourage him with soft words, he eventually relaxes in our arms. Sometimes when we are simply not paying attention, he comes out of his crate - which is always open except for when he is eating - and very quietly approaches us for some pets and kisses and just stands there until we notice him. Getting him to trust again has been difficult and slow, but he has come light-years from how shutdown he was when Best Friends first rescued him and when he first came home.

Well, there are just so many. We love his gorgeous, soft face and eyes, and that he seems to want to be a part of the family and just needs help to learn how. He does such funny things. We now have a professional trainer, Caitlin, who teaches shy dogs how to walk on a leash. Shadow rides in a little red wagon with Caitlin walking next to him and Harold pulling the wagon. At first, Shadow was terrified, but then he learned to relax in his "chariot" and began looking around at the birds, ducks and squirrels; the neighbors outside talking; strange vehicles, such as garbage trucks and cars; children playing and other neighborhood sights and sounds. Now he only rides part of the way and then jumps out and walks home on a loose leash doing normal doggie things, like sniffing, stopping to look at interesting things, and even going potty. Last week, he met a lady walking a little pug and gave the pug a sloppy wet kiss across the face. He also has learned to come to the door to welcome us home, actually wagging his tail. Then he runs back and forth from the door to the family room where his safe place - his well-appointed crate - is located.

Shadow's favorite thing to do is "hide" in his crate. He still needs the security of a "safe place." Shadow has been put on anti-anxiety medication by his veterinary behaviorist, and it does seem to help, but we need to coax him out, and we take every opportunity - particularly when Molly is sleeping in the other room or outside - to coax him out for some quality playtime and lots of cuddles. His second favorite thing to do is to go out for walks with Caitlin; in fact, he has made her his girlfriend! He runs to the door before we even know she's there and sits on her feet and stares at her with these gorgeous goo-goo eyes. 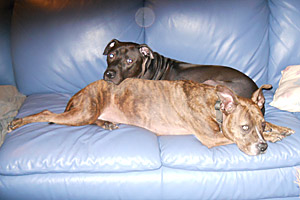 Everyone says how lucky Shadow is to be in our family, but we feel that we are the lucky ones. We decided to adopt a Vicktory dog because we were so ashamed that one of our species could do that to another living creature. And it wasn't as if there were any long lines to adopt this particular boy because he doesn't roll over for belly rubs and do cutesy things because he was so damaged. (I am trying to teach him to roll over, so I can rub his belly, but for now I give him belly rubs while he is standing or sitting.) So we said, "We want him. He needs us the most." But having Shadow has enriched our lives. Without knowing it, he has taught us about forgiveness - our boy holds no grudges, and he is slowly coming out of his shell to give the unconditional love he was born to give. In the meantime, we continue to shower him with love and hugs and kisses, and we believe that it will be returned in full as time goes by. I only wanted to see him wag his tail, and he does that often now. In the meantime, we know he loves us almost as much as we love him.

What do you think people can learn from Shadow the Vicktory dog?

People can learn from Shadow, as from all the Vicktory dogs, that a dog's breed is not an indication of the dog's personality or temperament. It's all in the way their humans raise them. And even then, like abused children, they can be tortured and brutalized and still come back for more. Further, people need to understand that every dog is an individual and must be evaluated on his or her own merits. The fact that a dog has been horrifically abused and mistreated is not an automatic indication that the dog will be vicious or unable to accept and return love in a normal home with loving pet parents. In fact, Dee and Caitlin taught us that dogs who've been psychologically abused often fare worse than those who've been physically abused. Shadow - aka Shaddy, Shadaboo, Black Beauty, Sweet Black Angel - gets sung to sleep every night to "Blackbird" by the Beatles, courtesy of mom who lies next to him and sings quietly into his raised, listening ears.