From shelter dog to service dog 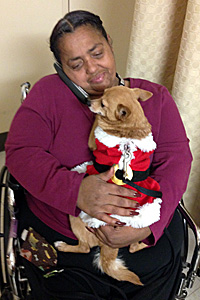 When Foxi arrives at the senior rehabilitation center each Tuesday in Burbank, California, she immediately turns heads. It may be because the little golden-coated Chihuahua mix service dog sports a different miniature outfit each time, but it’s more likely that people are eagerly awaiting their turn to cuddle one of their most favorite visitors. Foxi takes her popularity just like she does everything else — totally in stride.

In fact, Foxi’s super-sweet personality is so pervasive that it ended up changing her adopter Dottie Goldstein’s life in unexpected ways. The two met in November of 2014 at the Best Friends Pet Adoption and Spay/Neuter Center in Los Angeles, where Foxi had spent a month getting well before she was ready for adoption.

Like all pets at the center, Foxi came from Los Angeles Animal Services, where she’d ended up after losing her home. But Foxi arrived needing quite a bit of help just to get healthy. She had worn-down teeth, a skin infection, multiple hernias on her belly, and above all, she was scared. After daily medication, surgery to spay her and repair the hernias, and a thorough dental cleaning, Foxi was soon feeling a lot better physically. But she was so scared, she was nearly inconsolable — that is, until staff discovered what helped her relax and not be so afraid.

She just wanted to sit on people’s laps.

Once they realized that a human’s lap is Foxi’s happy place, staff gave her as much lap time as they could. And it turns out that those early moments were just a glimpse of the perfect home (and job) that Foxi would soon have.

Dottie Goldstein came to the center with clear ideas of what she wanted and didn’t want in a dog. She’d recently moved from a house into an apartment and she was looking for just the right canine companion to fit into her new life in a smaller home. She wanted a dog she could carry and easily take for walks. “I’m 69 years old and I have bad arthritis, so I can’t walk a big dog,” Dottie says. But, the day she came to the center looking to adopt a small dog, the only ones there were Chihuahuas. Dottie’s first thought when she saw Foxi was, “No.”

“I just didn’t think I liked Chihuahuas,” Dottie says. “I thought they all barked a lot, and I knew that wouldn’t work in an apartment with neighbors all around.” But she decided to give Foxi a try anyway. Boy was she in for a surprise.

Foxi turned out to be about as close to perfect as Dotti could have ever hoped for. Foxi not only settled immediately in Dottie’s apartment, she was soon Dottie’s constant companion, accompanying her everywhere. Foxi went shopping, out to eat, to doctor’s appointments — anywhere Dottie went, Foxi was there. Then she started going along on longer trips. She went on a road trip to Lake Tahoe and even a camping trip, loving all of it. “She’s quick to adjust to about anything,” Dottie says.

And the biggest surprise was that she never barked. “She’s not the best watchdog,” Dottie laughs. But that’s OK, because Foxi’s other qualities shone so brightly that she’d soon have a different sort of job. 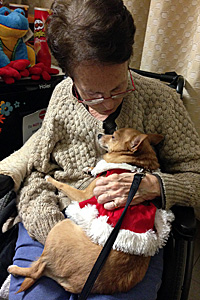 While Foxi settled into her life with Dottie, she retained her love for sitting with people. “She’ll go up to anyone and put her paws on them, asking to sit on their laps,” Dottie says. It was Foxi’s acceptance of everyone (and her gentle nature) that led someone to suggest that Dottie do therapy work with Foxi. Dottie says, “I’m retired and it wasn’t really my plan to do that, but Foxi was so amazingly sweet and friendly, I got online to research what it would take to do it.”

She ended up enrolling Foxi in training classes, and she got Foxi certified as an “emotional support animal.” Then she called around to local senior facilities to find out where she and Foxi might volunteer, and after an interview with the volunteer coordinator at one facility, Foxi and Dottie had their duties assigned. That was back in August of 2015, and now Foxi shows up every Tuesday to visit people who can’t wait to see her.

When she’s volunteering, Foxi’s only job is to sit on people’s laps in their wheelchairs or in bed. And she is really, really good at her job.

“She just lies in people’s arms,” Dottie says. Foxi’s adoration of everyone she meets is shared by patients at the rehab facility where she volunteers, and that has led to a growing list of people who benefit from her cuddles. Dottie says, “We started with visiting 10 people each Tuesday, and now we’re up to 17. As I walk around the facility with Foxi, people flag me down.” But Dottie doesn’t mind. The joy Foxi brings people is worth every minute of extra time spent.

She’s even branched out to helping a younger crowd — students. During finals week at the University of Southern California, Foxi was part of de-stressing sessions offered to students. Foxi, wearing a little red dress, was happy to do her part, receiving hugs and cuddles, giving students a few minutes of bliss before heading into an important test. As she melted into their arms, it was clear that the feeling was mutual.

To see Foxi happily perched on a student or patient’s lap shows how far she’s come from the scared, sick, unwanted dog she was. Like everything else, Foxi takes it all in stride.