From shelter dog to service dog for special boy

Image
Bart gets a second chance when he is adopted as a service (therapy) dog to help an autistic boy and his family.
By  Denise LeBeau 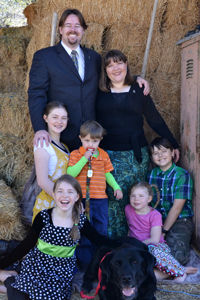 When five-year-old Dalton Excell’s sister was invited to perform at Disneyland, the whole family was excited to take the trip. Even Dalton’s mother, Angie, who just a year ago would have been concerned about taking Dalton to a place with so much commotion, knew he’d be OK — all because of a very special big black dog.

Three years ago, Dalton was diagnosed with autism spectrum disorder. His tendency to wander away made outings a challenge for the family and dangerous for him. By the time Dalton was diagnosed, he’d already gotten lost a few times. A turning point occurred one day when the family was having lunch during a shopping trip. Angie was trying to manage Dalton and pick up everyone’s order. As Dalton tried to wriggle away, all the food wound up on the floor. “Keeping one hand on Dalton at all times was necessary for his safety, but I couldn’t keep a hand on him and help his siblings,” says Angie. “It was very frustrating.”

Angie began exploring ways to help Dalton and learned that service dogs could help autistic children. As she researched how to go about getting a service dog, she learned there was one big hurdle to overcome. “I was distraught to find that autism service dogs can cost between $10,000 and $30,000,” says Angie. But then she learned that Best Friends trains service dogs and places them with people who need them, at no cost to the family.

Sherry Woodard, Best Friends’ animal behavior consultant, selects shelter dogs to be trained as service or therapy animals and eventually be matched up with people who need them. It’s all part of Best Friends’ Canines with Careers program.

After meeting Dalton’s family to learn about his needs, Sherry searched shelters for a dog who would be a good fit to help him. “I was looking for a dog big enough to handle Dalton, but with a personality almost unaffected by emotional meltdowns,” Sherry says.

At a city shelter in southern Utah, Sherry met Bart, a big, mellow and sweet dog who, above all, was steady — just what Dalton needed. Likewise, what Bart needed most of all was a home, and it looked like he might get lucky enough to land in one where he’d be especially appreciated, because he’d have a very important job.

Sherry worked with Bart daily for two months, getting him ready for his assignment. She worked on his focus and ability to calm right back down after a moment of excitement. Bart also learned an important game called “find Dalton,” in which the person with Bart follows until the dog locates Dalton. As Sherry says, “That’s very important if Dalton ever goes missing.” 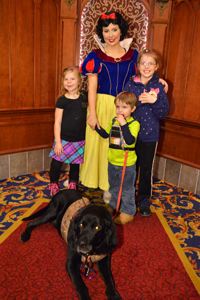 Dalton and Bart began their journey together last March and their lives haven’t been the same since. “Dalton has more confidence and less anxiety with Bart at his side,” says Angie.

Their adventures are just beginning. Bart has already been hiking at Bryce Canyon National Park, with Dalton beaming next to him, as was the rest of the family. Thanks to Bart’s presence, they worry less these days about Dalton’s safety.

“The process our family went through to get Bart was one of wonder,” says Angie. “It was so stressful to have a child constantly in danger — someone who could wander at any time. Sherry made it so easy. She came and met us, helped us articulate our needs and filled them.”

And what about a fairy tale ending for a young boy and a formerly homeless dog? It happened. Dalton and Bart did get to meet a princess at Disneyland.

Be a part of the magic of helping animals in need by becoming a Best Friends member.