Shy cat goes from shelf to shoulders to home

Image
Shy cat used to hide all the time, but then she realized she loved riding on people's shoulders. This shoulder cat's whole life has changed.
By Christelle L. Del Prete

When Carly arrived at Best Friends Animal Sanctuary, she discovered what she thought was one of the very best cat perches in Cat World: a shelf in a walk-in closet that was piled high with blankets. There, Carly made a nest so comfortable that she didn’t want to leave it. She spent most of her days there, coming down only to eat and drink, use the litter box and get her medical treatments.

Although Carly seemed happy, hiding in a closet doesn’t give a cat a very good chance to be seen by potential adopters. So, Carly’s caregivers coaxed her out and showed her the “cat sits on shoulders” trick. Suddenly, riding on her caregivers’ shoulders was her favorite thing to do, and she was getting a lot more attention. She’d come a long way since her first days at the Sanctuary.

From cat in closet to cat on shoulders

Carly came to the Sanctuary through a local Best Friends community cat program. The reserved black cat was eight years old and feeling lousy because of a chronic upper respiratory infection. She needed nebulizer treatments twice a day to help with her breathing. She was also treated with steroid shots and drops to stimulate her appetite.

As Carly began feeling better and getting more comfortable with her caregivers, people began to spot the shy cat riding on shoulders more often. She also spent more time out and about rather than hiding on her shelf. Although she still liked to curl up in her hidey hole, she would also hang out in a cat bed in the kitchen when she wasn’t perched on someone’s shoulders. That’s where she was when Carrie Boyer met her. 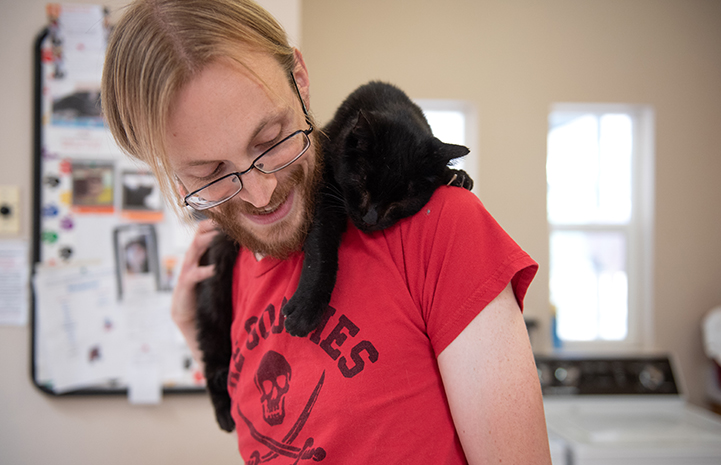 Carrie, who lives in Salt Lake City, had volunteered at the Sanctuary last year and had told her daughter, Megan, all about it. Megan (who was visiting from North Carolina) also wanted to volunteer at Best Friends. The two decided they would head to the Sanctuary together. Before they did, they talked about the possibility of Carrie adopting another cat. Megan was all for it, but Carrie was hesitant, because she had lost a cat to kidney failure the previous fall.

Still, Carrie began warming up to the idea of adopting a cat, and started to consider what kind of cat she’d like to bring home. “I knew I wanted an adult or senior cat. I had looked on the Best Friends website and found out about “caturtles” — shy cats who would come out of their shells in a home. I knew that would be a personality I’d look for. I’d find a cat who could use a quiet space and who might otherwise be overlooked.”

As Carrie and Megan were checking in at the Best Friends Welcome Center and waiting to begin their first volunteer shift at Cat World, the thought of bringing home a cat became too tempting, and Carrie filled out an adoption application.

Mother and daughter started to look at cats available for adoption and wrote down the names of some they wanted to meet. Even though Carly was exactly the kind of cat Carrie was looking for, she wasn’t originally on their list. 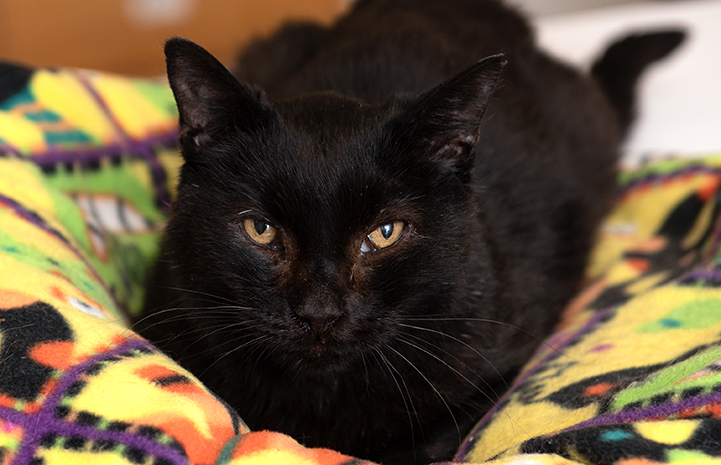 Coincidentally, a few of the cats on the list lived in the same area as Carly, and Carrie and Megan ended up volunteering there. Cat World caregiver Edison Freebairn started introducing the mother-daughter duo to the cats. “After meeting quite a few,” Carrie says, “he said he had an older girl he wanted us to meet. It was Carly. She was sleeping in the cat bed in the kitchen. He said she gave the best hugs and was super laid-back. One round of Carly’s shoulder snuggles, and we were hooked.”

Carrie had made up her mind. She and Megan made plans to pick Carly up the next day, after their last volunteer shift. But while discussing Carly’s medical needs with a Best Friends adoption specialist the next day, Carrie felt a little nervous. Because of her busy schedule, she hadn’t been looking for a cat who needed the kind of extra daily care that Carly did. Still, Carrie was in love with Carly and couldn’t bear the thought of leaving her behind. She took the chance and brought Carly home that day. 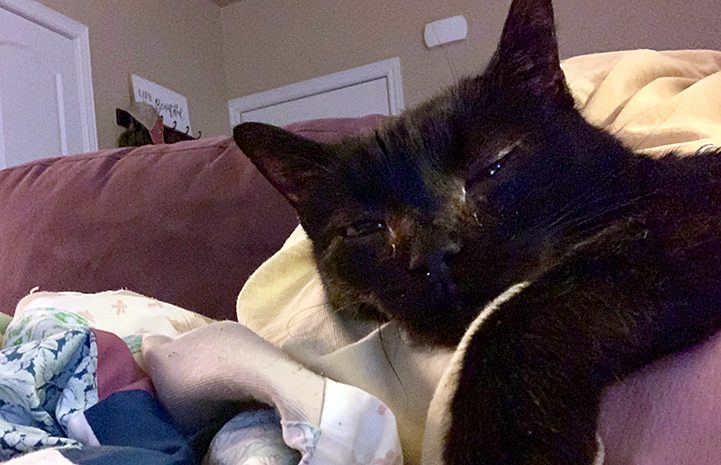 “Honestly, within the first few days I couldn’t imagine my home without her,” Carrie says. As it turns out, Carly went home with Carrie at exactly the right time. Megan was about to end her long visit, and Carrie knew her condo would feel empty without her daughter there. But Carly soon became a constant loving companion for her. She likes to curl up on Carrie’s lap and starts purring anytime she sits down.

“I have the goofiest, cuddliest love bug to share my home with. It’s been magical getting to know her and watching her change these last few weeks. As she’s settled in, she’s become playful and made this space her home,” Carrie says. “There’s nothing better than to see her happy. She has stolen our hearts, become our family and brought us so much happiness already.” 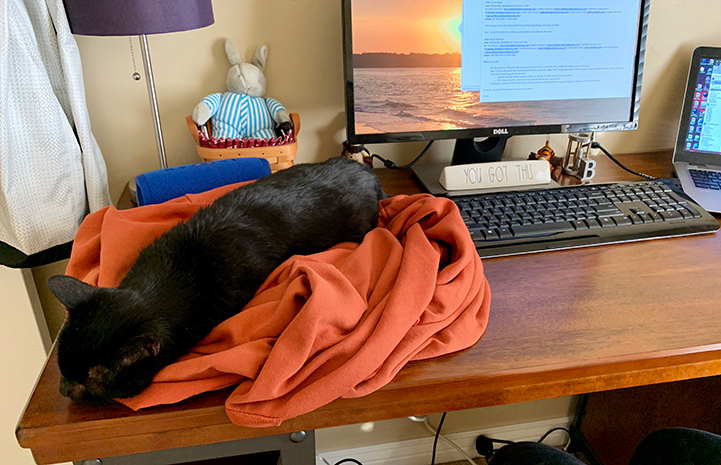 Photos by Molly Wald and courtesy of Carrie Boyer