Image
Shy dog from a dogfighting bust in Tennessee makes a dog friend, who is confident and helps him come out of his shell.
By Christelle L. Del Prete

The world was a frightening place for Norton the dog, who came to Best Friends from a fighting ring bust in Tennessee. Inside his Dogtown octagon, he would shut down in fear when meeting people. Outdoors, he would bark and keep as much distance as possible from everyone. In an attempt to gain his trust, his caregivers, including Haylee Heisel, tried hand-feeding him, but his progress continued at a snail's pace. When it came to people, his primary emotions seemed to be anxiety and fear.

Norton's wariness spilled over into the canine world, where he was very selective with his friends. But he got along well with his run mate, a black Lab named Trina. In fact, he quickly formed a strong attachment to her. Haylee says this is because Trina has a way with shy dogs. Although she seems to mostly ignore them, they tend to gravitate to her because of her confidence and joie de vivre. As it turns out, Norton and Trina are a perfect pair. 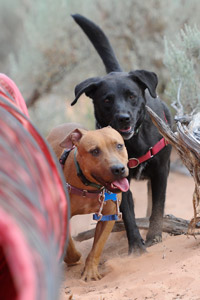 But Norton still had some battles to fight. He needed emergency surgery after ingesting part of a rope toy and then had to stay off of the sand (and thus out of his run) for a few weeks. His caregivers moved him into the kitchen in the Fairway, the building in Dogtown in which he lives. Sometimes Trina would visit him, and, once he started feeling better, they had play dates at the dog park. But, in the kitchen, he still eyed his caregivers nervously from his bed.

However, after a month or so, Haylee began to notice that Norton seemed a little calmer in her presence. And then came a huge breakthrough. Haylee took him for a walk one morning, and he started to act differently. His body language indicated that he wanted to play. Haylee considered this. She wanted to help Norton come out of his shell, but she didn't want to push too hard and set him back. She decided to risk it and give Norton a play bow.

In that moment, magic happened, and the shy, sullen dog suddenly came alive. He began jumping, running and play bowing at Haylee's feet, slamming playfully into her legs and bringing her rocks and sticks to throw. "It was one of the coolest moments in my animal care career," Haylee says. Oftentimes, shy and/or traumatized dogs have a series of small breakthroughs accompanied by small setbacks. But Norton broke through all at once.

Though he is still a bit reserved indoors, as soon as he goes outside, he goes from zero to 60 right away. He plays with Haylee and the other caregivers on every walk he takes, he has learned to enjoy - and even to ask for - human affection, and he loves to play tug-of-war. 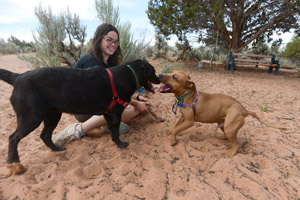 Dog learns to love and play

Though the patience and efforts of Norton's caregivers cannot be underestimated, Haylee attributes much of his success to his relationship with Trina, which "has blossomed into all play and love." She is his constant companion and playmate, his boost of confidence when he needs it.

For a dog with a less-than-ideal past herself (Trina came to Best Friends through Kanab Animal Control when her person surrendered her), she has an irresistible spirit, one that inspires hope and trust not just in Norton and the other shy dogs who seek her help, but also in the caregivers, visitors and volunteers who have been lucky enough to meet her.

Get more information about shy dogs.