Image
Dogs are rescued from a hoarding case. The shy dogs receive extra care, attention and help, including socialization and shy dog classes.
By Kelli Harmon 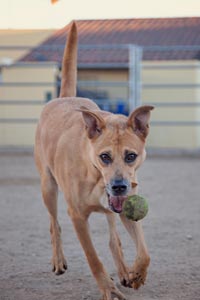 To watch Jerome galloping across the play yard at the Best Friends Pet Adoption and Spay/Neuter Center in Los Angeles, it’s clear his dark past is far behind him. The goofy, medium-sized, medium brown-colored dog is a survivor, and only through months of care and patience has he blossomed from a painfully shy dog to one who’s just plain joyful.

Dogs rescued from a hoarding situation

Jerome was one of 29 dogs to enter Los Angeles Animal Services from a hoarding case in the summer of 2013. The dogs had to stay in the shelter and be held as evidence for almost a year. Mike Harmon, manager at the adoption center, says: “Once the dogs were released, we waited for rescue groups to pull the dogs they could help first, and then we took in all the remaining dogs.” That meant 14 new arrivals at the center in Mission Hills — 14 dogs who were one step closer to homes, but would need help to get there.

The adoption center is set up to find homes for as many pets as possible from Los Angeles Animal Services (through an exclusive contract with the city). It’s part of Best Friends’ No-Kill Los Angeles (NKLA) initiative to stop the killing in Los Angeles city shelters.

About half the dogs from the case were adopted quickly, but the really shy ones (including Jerome) dove into their indoor enclosures whenever anyone came near. That meant it could take longer for them to be chosen by adopters. Mike explains, “When a dog doesn’t engage with potential adopters, people move on.”

To help them overcome their fears and better endear them to adopters, the dogs have gotten the extra care and attention that the center provides to all pets who need a bit of extra help. They’ve taken part in the center’s shy dog classes, where volunteers spend lots of time with them, helping them to see that people aren’t so bad. Over time, the dogs are learning. 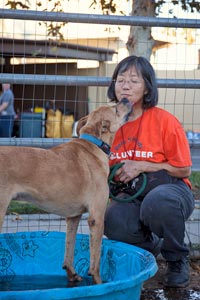 Luci Kadota enters Jerome’s run, and he responds by wagging not just his tail, but his whole body. Luci leashes him up and the two walk to a large outdoor play yard where Jerome runs, his ears flopping, tongue lolling. Luci says, “I think he’s a friendly dog in a shy body.” He obviously adores Luci, who has been working with him for months. “He’s made so much progress.”

In fact, Luci (who has been volunteering with Best Friends in Los Angeles for 14 years) works with all the dogs still at the adoption center from the hoarding case, to help them overcome shyness and ultimately find homes. Luci says, “I try to work with the underdogs, the ones with the greatest hurdles to overcome.”

Next on her list for the evening is Charlie, a black and white cattle dog mix. He bursts out of his run, zig-zagging back and forth on the end of the leash the whole way outside, barely able to contain his excitement. In the yard, he play bows, zooms in circles, and practically climbs into Luci’s lap for scratches under his collar. “He loves to roll in the dirt,” Luci says. “He’s happiest when he has a light dusting of dirt from his ears to the tip of his tail. I’ve given him so many baths.”

Watching Jerome and Charlie today, you’d never guess they spent part of their lives with little human contact. They only needed love, understanding and time for their true selves to shine.