Shy macaw has a lot to say

Image
Riley is too shy to talk in front of us at the Parrot Garden, but she tries out all the new words she's learning when she thinks no one is listening.
By Sarah Thornton

If you spend some time at Best Friends’ Parrot Garden, you might hear a nasally voice down the hall trying to mimic something you said a little while ago. Good luck trying to track down this particular copycat, though, because as soon as Riley sees you coming, her shyness gets the better of her and she stops talking. Still, if there was ever a time to watch what you say in a building full of parrots, it’s definitely now, with Riley around.

Winning over a shy macaw

Riley’s first two decades of life are mostly a mystery. In her last home, her people tried their best but they weren’t prepared for everything involved in caring for a parrot. Riley didn’t get a whole lot of time around people, since she lived in their garage. When she came to Best Friends, she was scared and missing many of her feathers (including almost her entire tail) due to stress- or boredom-related plucking.

To win her over, caregivers at the Parrot Garden slipped her a treat every time they walked past her. She hadn’t been on the best diet before, and she absolutely loved the healthy yet tasty treats. It didn’t take long for Riley to relax and start looking forward to seeing people approach.

[Check out the Parrot Garden at Best Friends Animal Sanctuary]

“She actually does seem to enjoy us being around,” says Jessica Hagedorn, one of Riley’s caregivers. “I do think that she’ll get to the point where she wants to be out with people. She’s a good bird; she’s just a little shy.”

No one has seen her plucking since she settled in, either. But because of damaged follicles from so much continuous plucking, the feathers that Riley is missing probably won’t grow back much more.

Caregivers are working on getting Riley comfortable with stepping up — climbing onto an arm or hand-held perch — so she can get out and spend more time with people. She’s still shy about it and going all the way to the outside enclosures is a little stressful, so she stays inside. But she’s making progress every day.

“The other day, I did get her out and sat in the staff room with her on my lap,” says Jessica. “She loves being talked to; she loves attention. She has a very good disposition.” 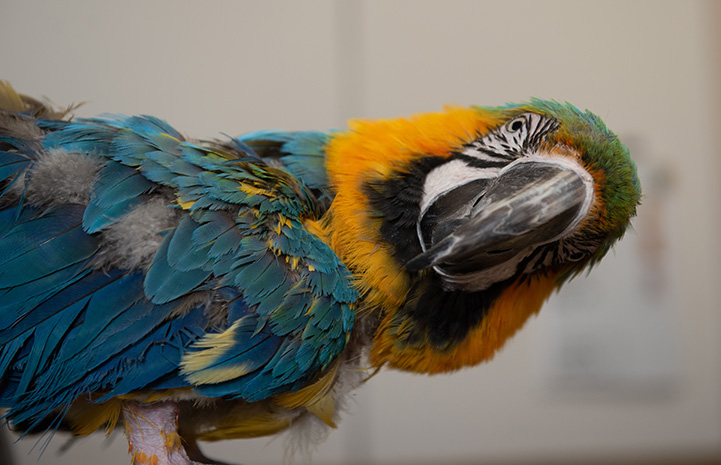 Riley is discovering all sorts of things she enjoys, from treats and attention to showers and swinging. She might not be very interested in other toys, but she does love her swing. “We’ve tried that swing in many other birds’ cages here,” Jessica says, “and it just gets ignored.”

Riley sits in the swing, a simple plastic circle, any time she’s in her cage, rocking back and forth with it to keep up the momentum. If it starts slowing down, she uses her beak to pull it toward another perch off to the side before letting go, setting the swing in motion once again. She loves it so much, in fact, that she’ll get to keep it when she is adopted. Her caregivers couldn’t possibly stand for her to be without it.

Riley’s other favorite hobby is copying anything she hears — even more than most parrots. She shares a room with a pair of macaws who came from Hawaii and, within the first day, Riley had picked up on their favorite greeting: “Aloha.”

“We have to watch what we say around her because she is a sponge,” says Jessica. “One day, I was in another room and I said, ‘What are you doing?’ a few times to one of the birds. Later that afternoon, I heard Riley trying to say it. She was like, ‘What doing?’ She’s a very smart girl.” 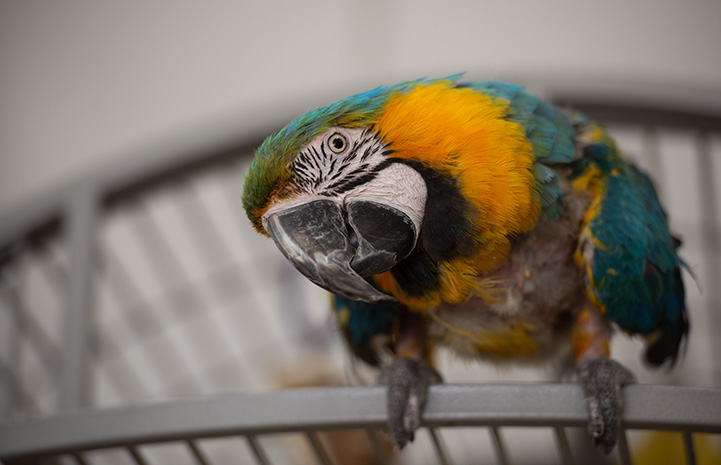 Riley calls out for Lola and Eric, people from her past, we assume, since there are no people with those names at the Parrot Garden. And, of course, she knows the quintessential parrot word, crackers.

While Riley is always listening and picking up new words and phrases, she’s still too bashful to talk in front of a human audience. She could be giving an entire monologue, but as soon as she sees someone watching her, she’s right back to silently swinging.

There is an undeniable curiosity in Riley’s eyes as she takes in the world around her, studying new faces and unfamiliar objects. When she’s comfortable on her swing, you almost wouldn’t be able to tell how shy she really is. And she’s coming out of her shell more and more all the time, ready to make new friends (slowly) and add even more words to her vocabulary.

She’s sure to make a wonderful addition to her future family. Just be careful what you say around her. Really. 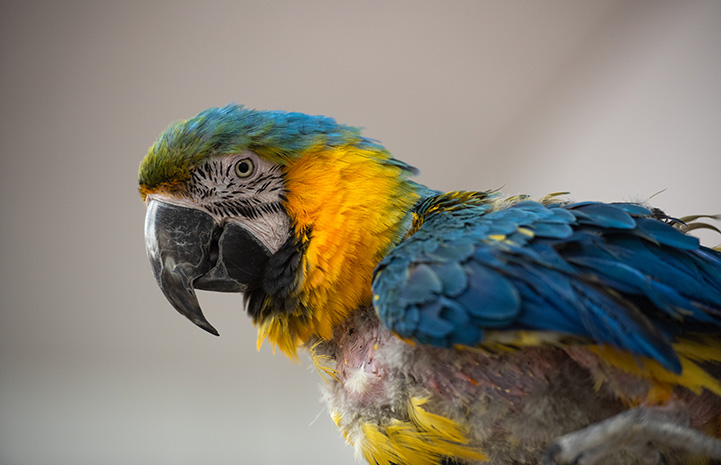 10 reasons to adopt a pet from a shelter