Shy puppy follows a trail of treats to new friends

Jane was still a puppy when she came to Best Friends at the age of seven months. But when she arrived at the Sanctuary, the cute little heeler mix had lots of catching up to do because before landing in Dogtown, she lived outside. While other dogs were around, Jane received very little attention from people and had missed out on all the important puppy training basics.

Sadly, Jane had already skipped a crucial puppy socialization period. From about three weeks to 16 weeks old, puppies absorb information like sponges, learning what is safe and what is dangerous about the world. That’s why young puppies at Dogtown attend puppy socialization classes run primarily by Dogtown volunteers. The classes teach puppies that the sounds of vacuum cleaners, doorbells, blenders and other household items aren’t so scary.

Not only was Jane completely unfamiliar with common household items, but she also had no clue what it was like to live indoors or walk on leash. Getting attention was a new thing, and Jane didn’t know how to socialize with people. Luckily, she didn’t show any signs of unpleasant experiences with people. She just needed time to learn about them. For Jane, it was puppy socialization 101. 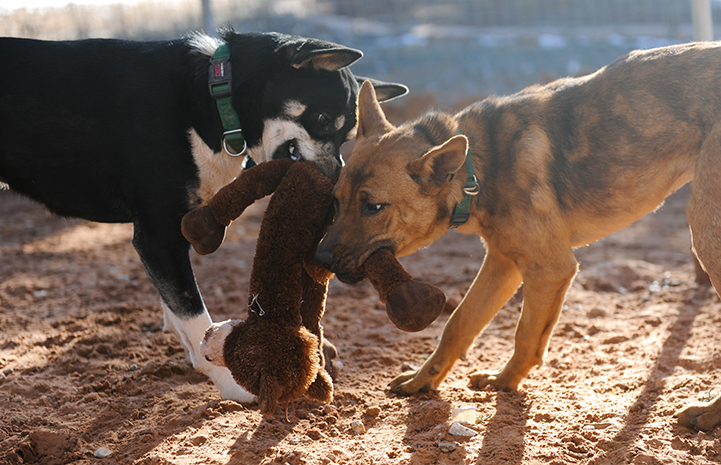 While Jane didn’t object to being leashed and harnessed, walking on leash wasn’t something that came easily to her. As soon as a caregiver clipped a leash to her collar, Jane would stand there looking scared with her tail tucked and her eyes darting around the room as if she was searching for an escape route.

Realizing that simply stepping out of her room was nerve-wracking for her, Jane’s caregivers took a few steps back. During quietest times of day, they opened the door to her room and invited her to come out as far as she wanted to. Using a baby gate, they blocked off the long “scary” hallway leading to the exit, and guided her toward the large kitchen area. Then they set out a trail of treats that she could follow into the kitchen.

Though Jane could have turned around anytime and walked back through her room’s open door, she quickly learned to follow the treat trails. She also learned that “kitchen time” meant other good things, including volunteers who would sit quietly on the floor and hand-feed her.

Jane did this step by step, in short little sessions, until she became comfortable walking back and forth from her room to the kitchen. Once that happened, her progress accelerated.

Though Jane probably had never played with a toy before coming to Best Friends, kitchen time soon came to mean playtime. It didn’t take her long to learn how much fun it was to play with the flirt pole. A flirt pole is a stick with a long stretchy bungee cord attached to it, with a toy on the end. Jane would grab the toy at the end of the cord, shake it playfully and then release it so that she could chase it again as her caregivers moved it around the room.

All the hand-feeding and the playtime helped Jane build confidence and make friends with people. She was also (finally) behaving like a playful, inquisitive puppy. By the time she was ready to leave admissions and move to another part of Dogtown, she was playing with toys on her own and greeting visitors with wiggles and kisses — especially when they offered treats.

She also had learned to walk on a leash by starting small (in the building by following a treat trail) and then moving outdoors, eventually crossing the parking lot and going inside of Dogtown headquarters. There, she found more friendly people who loved giving her treats and reassuring chin scratches. 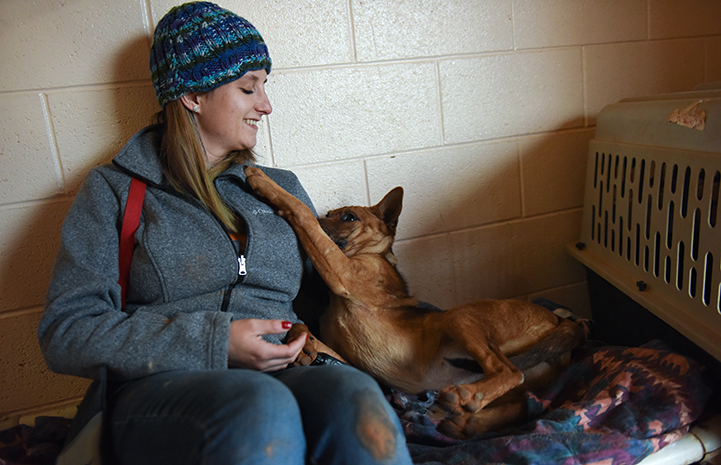 Now, Jane enjoys walks with her caregivers and her dog friends. Best of all, she’s learned so much that she’s the perfect pup role model for dogs who are still as shy as she once was. One other adult dog at the Sanctuary, who is incredibly shy and suspicious of people, has been getting braver about approaching them and being leashed up now that he’s watched Jane do it so many times.

It hasn’t taken Jane long at all to come around and catch up on all of the basics. In just under two months, she’s turned into a happy, friendly pup who loves people, treats and walks, and who’s happy to lend a paw to a shyer dog. For a puppy who hasn’t yet seen her first birthday, Jane’s come a long, long way. 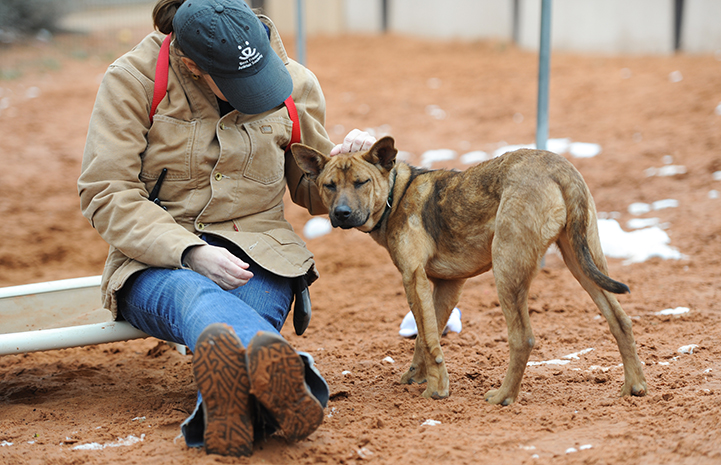