Sisters compete to see who can save the most pets.

Image
Two sisters who work at Palm Valley Animal Center in Edinburg, Texas, in different departments, compete to save the most dogs and cats.
By Best Friends staff

It’s an understatement to say that Yessy and Yobeli Banda are good at their jobs. The sisters work at Palm Valley Animal Center (PVAC) in Edinburg, Texas, in different

departments — Yessy in the rescue department and Yobeli in adoptions. Neither job is easy, especially in a busy shelter that is working hard to get to no-kill but is not there yet. In 2017, the shelter took in nearly 30,000 animals and saved 34% of them.

It was a very difficult place for an animal lover to work. But more of those animals are saved than ever before, thanks to people like Yessy, Yobeli and their colleagues, who refuse to give up. The sisters keep coming to work every day to face challenges and come out on top. They even have a friendly competition as to who is better at saving animals.

Best Friends is helping the shelter on its way to no-kill and you can read more about that here. With more help, the shelter’s save rate rose from 34% to 54% in a year, and they’re aiming higher each year. They are getting there.

Learn more about Yessy and Yobeli below in an article by Luis Quintanilla, PVAC shelter manager.

Working at PVAC is tough. In 2018 PVAC received approximately 30,000 cats and dogs. Housing space is finite, and with animals arriving every single day in large numbers, the work done here at PVAC always carries with it a very real sense of urgency. The pressure working in this environment is immense. Luckily for our animals and ourselves the employees at PVAC are blessed to have each other to draw strength and inspiration from.

I want to highlight two sources of strength and inspiration at PVAC. These two sisters represent the two sides of lifesaving here. Yesenia “Yessy” is in the rescue department, which places animals with rescue groups, and Yobeli works in adoptions, matching up pets directly with adopters.

As a rescue coordinator at PVAC, Yessy’s job is to take photos and videos of the animals in our care and send them out to our network of over 300 nonprofit rescue organizations. Rescue is one of the main ways that animals are saved at PVAC. It is not uncommon for Yessy to get 20 animals networked and saved in a single day.

On top of taking photos and videos of dozens of animals every day, she also gathers information about each animal’s health, size, and demeanor, so rescue groups can choose which animals they can take.

In the past, Yessy used to also have to draw blood for heartworm tests on those animals herself. Again, these tasks would be remarkable for just a handful of animals, but Yessy did this for dozens of animals daily. In 2018, more than 8,000 dogs and cats were rescued out of PVAC. Those rescued animals are largely due to Yessy’s tireless obsession with saving lives.

Yessy started at PVAC in June 2014. Before joining the rescue team Yessy worked in the suffocating heat of the kennels. Day after day she endured the heartbreaking and backbreaking labor of scrubbing kennels housing dogs whose odds at a happy life were slim. She would leave work so physically exhausted that she could barely walk, and when she got home, she would cry because as she put it, everything hurt.

In the following interview, Yessy answers questions about her work. 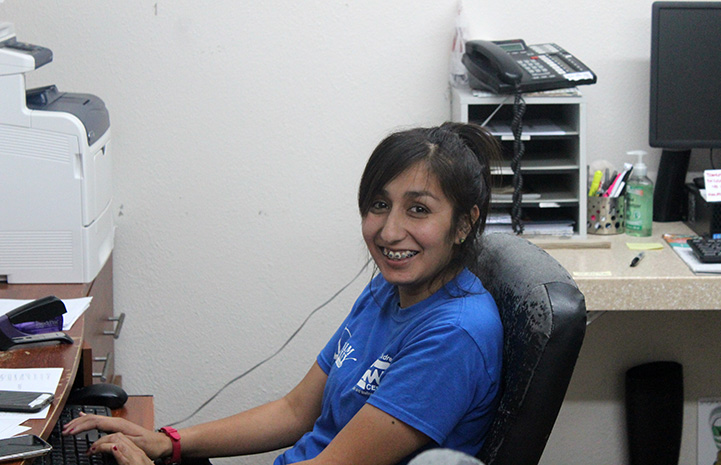 What kept you from leaving in those dark days?

The dogs. It is pure enjoyment working with them. If my dog was here, I would want someone to love him. Even if they don’t end up getting saved, they deserve love to the very end.

Never. Not really. I’ve been frustrated and sad, but I had to stay. Who else would do it? I still have a lot to do here at PVAC. The dogs don’t have a voice and they need one.

They are very strong emotionally. Very compassionate. I admire a lot of people who work here.

What goes through your mind when you put on your PVAC T-shirt every morning?

You have changed PVAC in such positive ways, how has PVAC changed you?

I’m more compassionate toward animals and people than I was before I worked here.

What was the best day at PVAC for you?

Every single day. We get to make a change for the animals every day. When we save an animal’s life it’s that animal’s best day, so every day is the best day. 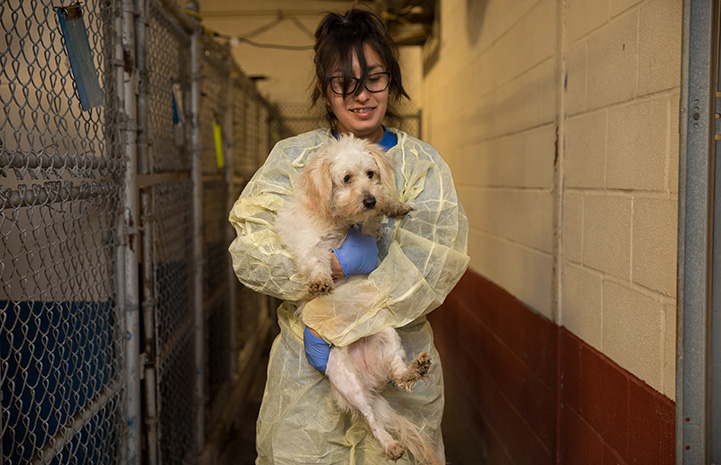 What would you say to an audience of a thousand people, all cheering for you and your amazing rescue numbers?

Nothing. I just care about the animals. I would be annoyed that I wasn’t working.

Who’s the better at saving animals — you or Yobeli?

In case her work ethic and compassion were not inspiring enough, Yessy was going to school during her time in the kennels. She majored in Spanish and minored in English. She graduated from The University of Texas Rio Grande Valley in 2017.

When I first met Yobeli I remember thinking, there’s no way she can be like Yessy. There has to be a boring or talentless sibling. I was utterly foolish to think that.

Yobeli is an adoption specialist at the newer, second adoption center for Palm Valley Animal Center, called the Laurie P. Andrews PAWS Center. Yobeli started working at PVAC in February 2016. Like her sister, she started in the oppressive heat of the kennels. Eventually, she became an adoption specialist and today she leads her team with the most adoptions.

The day I met Yobeli, she was sitting behind the front desk at PVAC. It was a Friday and I was there to pick up my paycheck. Before I could even begin saying hello, Yobeli greeted me with, “Hey what’s up? What do you need?”

Her tone was exactly like her sister’s — no nonsense, efficient down to the last second with no time or tolerance for prattle. Yobeli was in her element — handling a call, two customers and an annoying new employee who was trying to pick up his check. 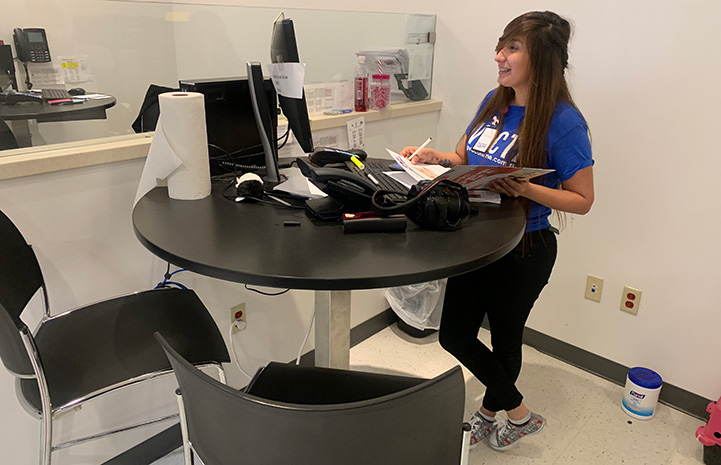 How did you first hear about PVAC?

From Yessy obviously! She told me to apply.

Did you go to school?

Yes, I majored in culinary arts at South Texas College.

Do you cook at home?

Yessy cooks. She cooks for her boyfriend. I only cook when I get paid.

How were your early days at PVAC?

The start wasn’t too bad. I didn’t mind cleaning the kennels, but seeing the dogs get taken to the back was hard.

What was the hardest day of your time here?

The first length of stay list at PAWS: We were out of space and the dogs were out of time. About six dogs were on the list and had to be adopted or rescued or they’d be euthanized. That list was made on a Friday.

What was the best day for you?

The next day after the length of stay list: On a Saturday, all the dogs on the list were adopted. The worst day and best day were back to back. All the dogs were saved.

Yes, a bunch of times. It’s too stressful. I wanted to quit many times. I developed anxiety working here. It’s a hard job. People yell at us because they don’t understand. We cry over the animals that don’t get adopted. Many of our own employees adopt animals so they can keep them from getting euthanized, simply because no one else wanted them. We don’t make a lot of money but we love our jobs and our animals so we save everything and everyone we can.

What made you stay? 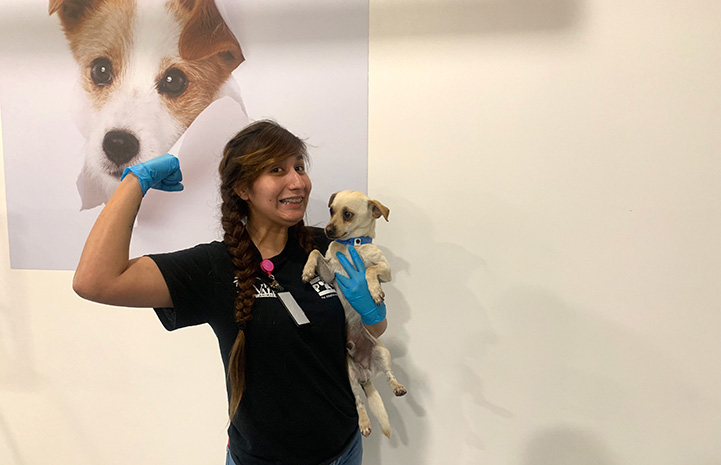 A lot of them have degrees and could easily go find other opportunities and careers with much more pay, but they choose to sta. here. I am proud to say that I love this organization and everyone who works here.

What do you feel when you put on your PVAC shirt every morning?

A sense of purpose. My purpose. We have to make sure the animals go home to a loving, wonderful family. These pets have never experienced the love of a family before. Our job is to find them happiness.

You have changed PVAC in such positive ways, how has PVAC changed you? I am more compassionate toward people and animals. Everything with a soul is worth saving.

Who’s the best at saving lives, you or Yessy?

Me obviously! But no really, everyone here, every department here at PVAC saves lives.

Yessy was my teacher, my source of strength during my time in the rescue department. She is fierce and resourceful. My first week in rescue I remember Yessy coming into the office with a slip lead around her neck, another tied onto her belt loop, and another in her hand. She was covered in sweat, fur, and her clothing looked as though it had just been soaked in one of the kennel drains.

She threw one of the slip leads across the room against the wall and was trembling with anger and sadness. “How are we supposed to get them all out!?” She screamed out to the two of us in the office.

That was the summer of 2018 when the daily intake of animals was at its highest. When animals were down to their last hours of life, they were housed directly in front of our rescue office. As we tried to network them out on our obsolete computers, on an internet connection that would have been slow by 1990’s standards, we could see them through the window, and we could hear them through the walls.

Her panic lasted only a few short moments. Within a minute Yessy was walking out the door toward the kennels, with defiance replacing the tears in her eyes. She went back out to keep trying to the last second to get the animals out of the shelter. When I saw her perseverance that day, I knew I never had an excuse to quit or to lose heart.

When I transitioned out of the rescue department and started working more out of PAWS, I felt homesick for the action of the PVAC kennels. Going from the transport van to a cubicle is such a rapid and uncomfortable decompression. Luckily, Yobeli can be found moving throughout PAWS with the same stubborn energy as her sister. 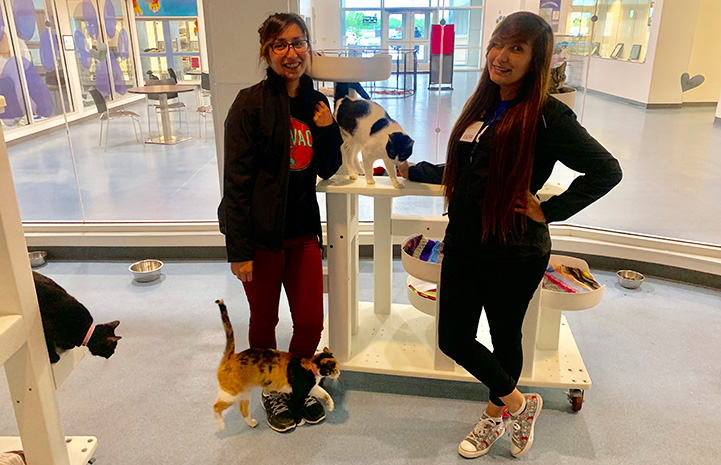 To read the full version of this blog and other news from PVAC, please visit their website.