Image
When he first came to the Sanctuary, this feline was extremely afraid of people, but he has slowly become calmer, friendlier and less shy.
By Christelle L. Del Prete

Say “Skittles,” and most people think of rainbow-colored candy. But Skittles the cat was so afraid of people when he first came to the Sanctuary, it seemed that he might never live up to his cheery name. The big, handsome Siamese mix had been abandoned before coming to Best Friends, and since people had let him down in the past, Skittles didn’t have any good reason to trust them. Instead, he hid his soft side beneath a hard outer shell that only time, patience and love could melt away.

A scared cat and a glimmer of hope

When Skittles first came to the Sanctuary, he didn’t want to be around people at all and refused to even be in the same room with them. If his caregivers were cleaning the large indoor room he shared with other cats, he ran to the screened-in cattery. When people entered the cattery, he ran inside. And if people were in both areas at the same time, he went the only other possible direction — up. Skittles dashed up into the rafters to hide until they left.

After a few months of fleeing as fast as he could, Skittles started hesitating — just for a moment — before running. That hesitation provided just enough time to give his caregivers a glimpse of more than his gray fur or a flash of his wide blue eyes. In those seconds, they saw a tiny glimmer of the cat Skittles would eventually become. He was curious about them, and that curiosity meant that he might be ready to give people a chance. 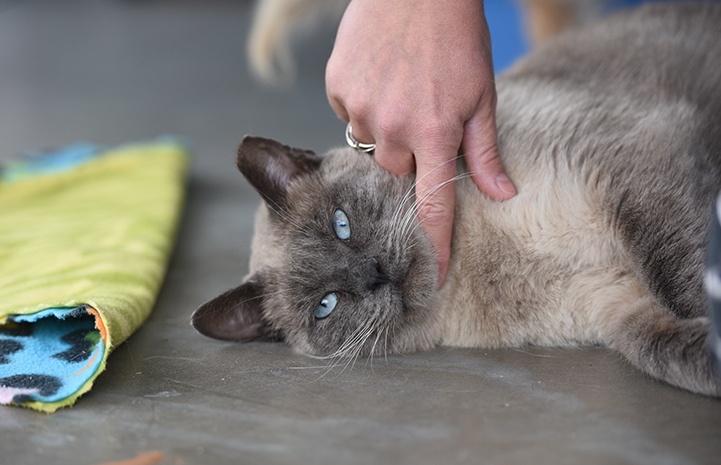 Cat World caregiver Kristen Kolar made it her mission to try to befriend the frightened cat, one baby step at a time. At first, that meant just sitting quietly in a far corner of his room or the cattery to see how long Skittles could tolerate her being in the same space. Once Skittles stopped running away, she inched closer and closer to him. Finally, when the skittish cat realized that no one was going to hurt him, he first allowed Kristen, and then other caregivers, to pet him.

As soon as Skittles learned to accept and then to enjoy being petted, he took a big, brave step all on his own. He walked over to Kristen while she was sitting on the floor, climbed into her lap, put his head on her arm and rolled onto his back. It was Skittles’ aha moment. He had placed his trust in someone, and for the first time in his life, he wasn’t let down. 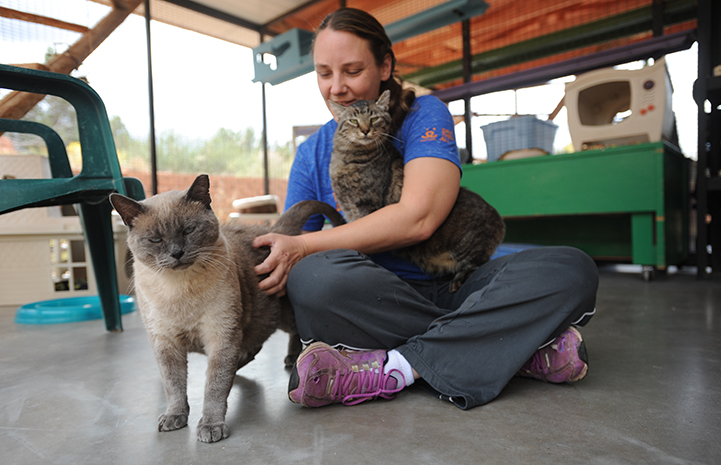 Skittles’ brave move broke open the floodgates. Now, instead of running away when people come into the room, he’ll rub against their legs, give gentle feline head-butts and jump up onto a cat tower to knead in front of them. He’s come a long way from darting into the rafters. Instead, visitors will find him at their feet, flopping over onto his back to ask for a belly rub from anyone so willing. “Watching his transformation has been so exciting,” Kristen says. “He’s so brave, and I’m so proud of him.”

His new trust in people also makes it easier to take care of him, since Skittles gets routine vet checks because he has the feline immunodeficiency virus (FIV). As he gets more comfortable being picked up, caregivers will be able to place him in a secure stroller to go for walks on the Cat World trails that wind through the Sanctuary.

It’s taken nearly two years — almost half of Skittles’ life — for love and patience to melt through his tough exterior. But now, the big, handsome cat is even sweeter than his name. 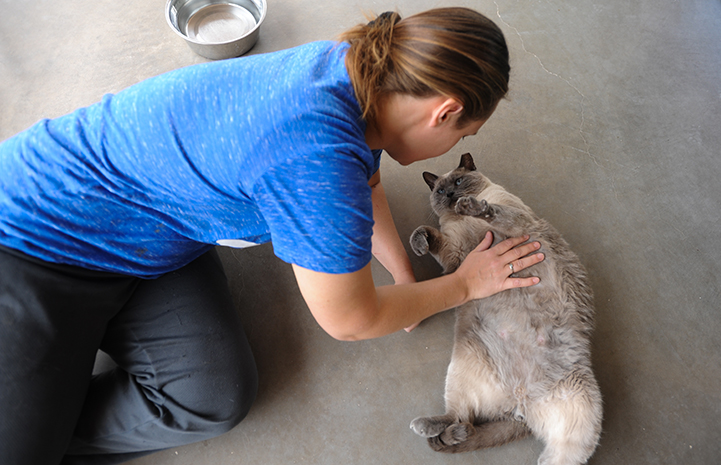