Snack time with Tommy the terrier

It’s snack time in Dogtown, and in the octagon building where he lives, Tommy, a tan-colored terrier mix, is on a “date.” No, he’s not flirting with the little beagle mix living two doors down. His date is with caregiver Jacquie Bushway-Speer, who’s helping Tommy get some extra socialization during one of the quieter times of the day in Dogtown.

When Tommy, who is 13, came to the Sanctuary a few years ago from an overcrowded situation, he was extremely unsocialized. He’s still very shy and sensitive to loud noises and sudden movements. He’ll often dart out into his yard through the dog door when visitors enter the building. But Tommy’s already come a long way at Dogtown.

One of his biggest improvements is that he’ll let his caregivers leash him up so that he can go for walks. And, if volunteers sit quietly in his room and read to him in a soothing voice, he’ll eventually get curious enough to come inside and listen for a little while. If the person is calm and patient, Tommy might even take a treat or two from an outstretched hand. 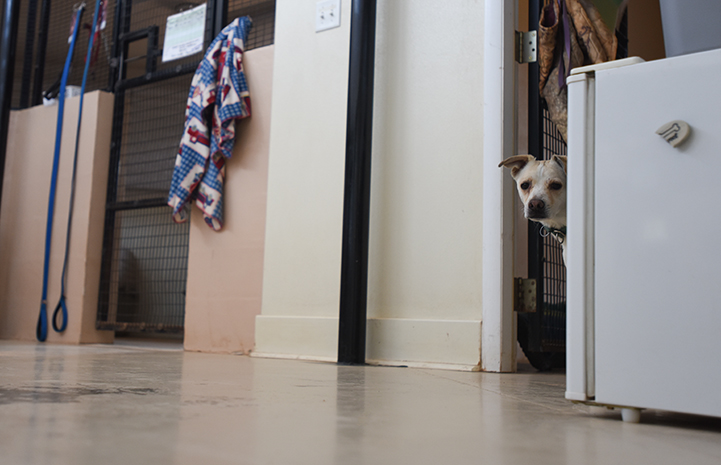 Enrichment for a shy dog

With Tommy, it’s all about patience. But while he’ll always be the one to set the pace for his own progress, his caregivers want to give him the opportunity to step outside his comfort zone in a fun and unique way.

Before each date, Jacquie prepares the building to give Tommy a safe and private space. First, she lets all the other dogs in the building out into their yards. For them, this means recess. As long as the weather cooperates, they’ll stay outside and play until Tommy’s date is over.

Then, Jacquie closes the front door of the building so Tommy will not be frightened by any unexpected visitors. When it’s just Tommy, Jacquie and (on occasion) a quiet guest still in the building, she opens the door of Tommy’s room and brings some snacks to the table in the center of the octagon.

Tommy isn’t locked in the building. He can choose to join the other dogs outside, and he could just hang out in his yard if he wanted to. But tempting treats, combined with his naturally strong curiosity, usually override any desire he might have to quit the building.

Slowly, Tommy steps out from the back of his room to stand in the open doorway. He looks around for a moment, surveying the scene with his nose twitching. Jacquie has left him a trail of treats from his room to the center of the octagon, only a few feet away.

He hesitates and makes a few false starts, dashing back into his room to seek safety. But then he returns with a quiver in his nose and curiosity shining in his eyes.

Finally, he creeps forward to snag a few treats. He hesitates again as if trying to decide whether to retreat or stay the course. Soon, he’s walking in an arc around the table where Jacquie is eating a granola bar. 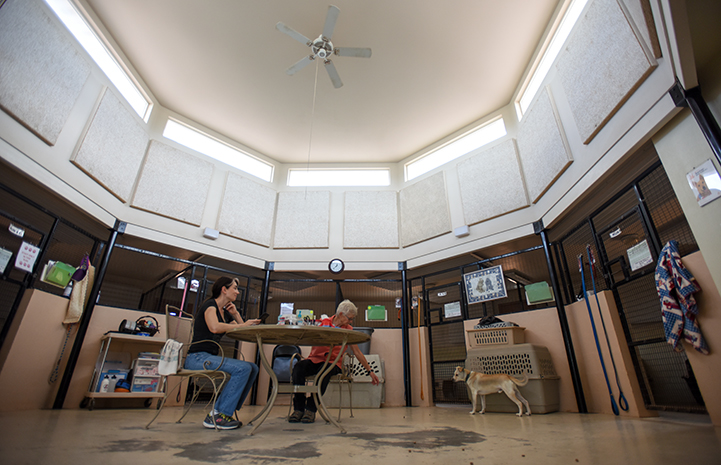 Big steps for a shy dog

“It’s very big for him to do this," Jacquie whispers. She offers Tommy a treat in her outstretched hand. He’s too nervous to take it, but he does take a few steps toward her to investigate it.

Tommy then continues walking slowly around the inside perimeter of the octagon building. He stops along the way to sniff a few things and to peek into a few of the other dogs’ rooms. Then he walks to the main door and stands looking out the glass window, with his ears perked up in interest.

He doesn’t look like a shy, scared dog anymore. He looks like he’s ready to go out into the world and face his fears. He’s holding his tail up bravely rather than keeping it tucked under his belly.

As the session draws to a close, Tommy retreats to the doorway of his room. He plays peek-a-boo a few times, sticking his head in and out of his room. Then he stands still.

His nose is still twitching but his eyelids look heavy as if it’s time for a nap. It’s been a successful date, but being brave takes a lot of energy. Tommy is tired and heading to his bed to rest.

As the other dogs return to their rooms and the staff members and volunteers filter back in, the building is suddenly full of activity again. But a lot has happened for Tommy in those brief moments of quiet.

A new favorite time of day

Being able to explore the building and hang out with his caregivers helps Tommy gain the confidence to be more social with people and more comfortable in new environments. That, in turn, improves his chances of being adopted. But if you ask Tommy, the very best thing about snack time is that now he has a new favorite time of day. 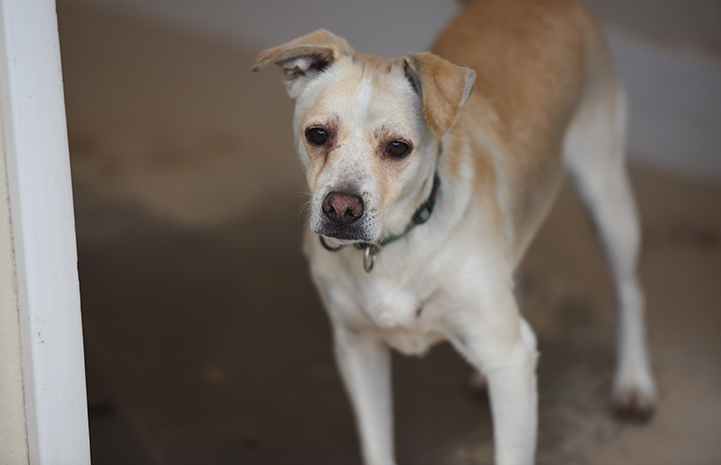