Image
Tabby, who prefers to be an only cat, loves humans and finds her niche greeting people in the visitor center at the Sanctuary.
By Christelle L. Del Prete 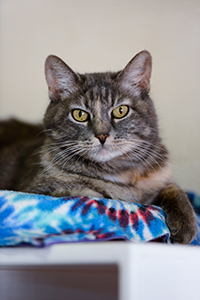 Walk into the Best Friends Visitor Center in Kanab, Utah, and one of the first things you’ll see is Erica, the cat who’s ruled the place since she moved in a few weeks ago.

The pretty grey tabby’s favorite place to perch is in the plexiglass cubicle that pushes out of the front of her room. From there, she can watch the entire visitor center floor with her big gold eyes, waiting for people to walk through the doors. When they do, Erica knows it’s time to turn on the charm. She also knows most people won’t be able to resist her friendly overtures.

Though it’s sometimes hard to imagine, Erica was a little frustrated and grumpy when she first came to Best Friends. Her person had recently moved away and left her behind. Although she’d been rescued, being abandoned was hard on her. The worst thing for social cats like Erica is the loss of human companionship. She is and always will be a people cat. And she’s not afraid to let people know when she feels she’s not getting enough attention.

At first, Erica settled into her room at the Sanctuary where she could bask in affection from Cat World caregivers and volunteers. There, she pretty much ignored and avoided all the other cats. It was obvious where her focus was, and what she wanted the most. She wanted to be loved and admired by every person around her. Ideally, she wants to be someone’s one-and-only cat, so all the attention can be hers. 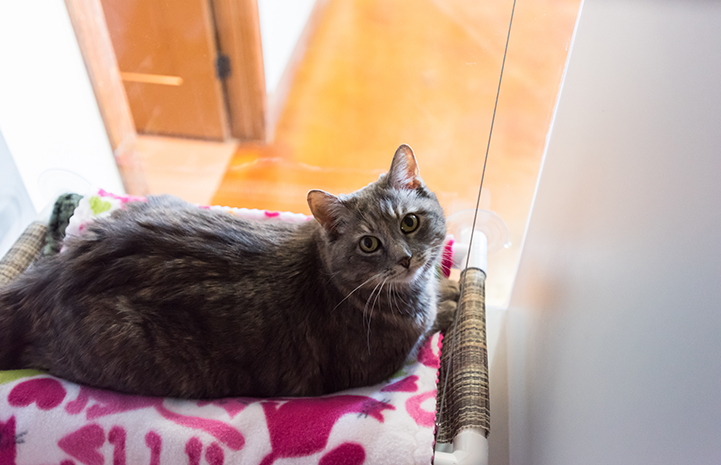 One of the Sanctuary’s most social cats

During her wait for that perfect home, the Best Friends Visitor Center was looking for a Sanctuary cat to try out the cool new kitty haven there. That got Cat World staff thinking. Who would be the best candidate? Since the indoor cattery showcases adoptable cats and also gives visitors face-to-face time with friendly felines, it certainly couldn’t be an anti-social cat. It had to be one of Sanctuary’s most social cats — someone who likes lots of human interaction.

Erica seemed like the natural choice. She’d already made it clear that people were her thing, and that she wasn’t shy. The only question was how she’d do with all the central foot traffic. Though most of that foot traffic is people of all ages, some of it includes visiting dogs, too. For example, the Best Friends Visitor Center hosts weekly dog training classes.

As her caregivers soon found out, Erica was quite happy with her new digs. In the mornings, when visitor center manager Carrie Smith arrives, Erica gets some one-on-one “coffee time.” If the center isn’t open yet, she comes out of her enclosure and walks around the big, welcoming space to stretch her legs. She’s even got her very own stroller, so staff members can take her outside for fresh air and a tour around the neighborhood. 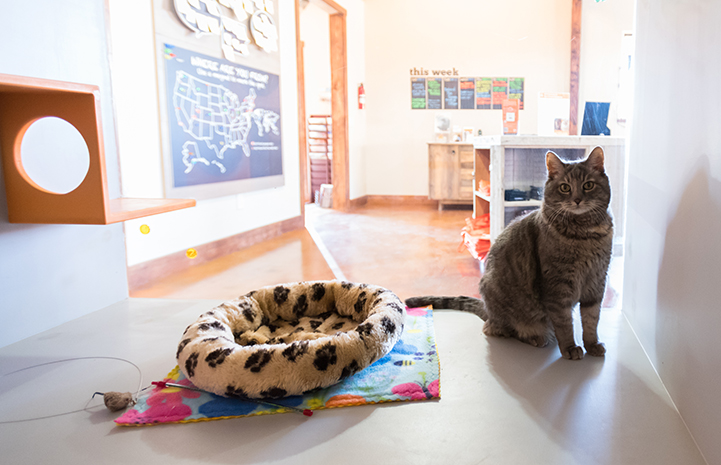 Her most affectionate and friendly self

While she doesn’t interact with the dogs who come into the center, she's very interested in them and seems curious when they come in. If she’s lying in her cubicle and a friendly dog walks up to her enclosure, she’ll stand up and sniff the pooch through the glass.

But it’s when people approach that Erica is her most affectionate and friendly self. In fact, she's quite a flirt. She’ll lie on her side, reach her paw out to the plexiglass and look at her admirer through soft, sleepy eyes.

Eventually someone will want to adopt her, making her their one and only, and another cat will get to be the official in-town greeter at the visitor center. But until then, Erica gets to rule the place like her own personal kingdom, and she’ll always have the distinction of ruling it first. 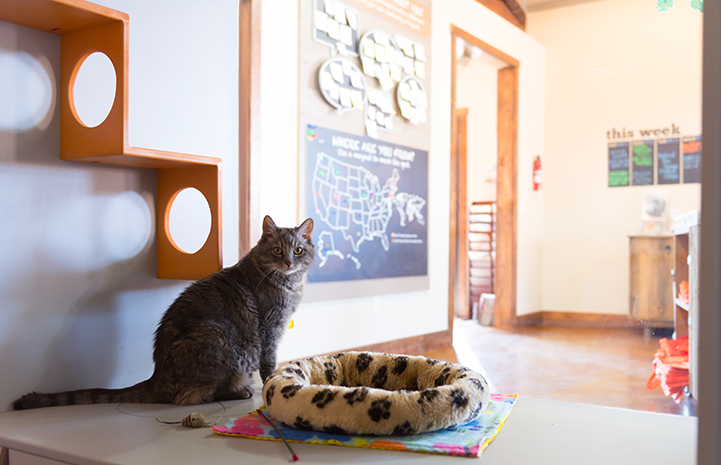