Image
Chinchilla needs a little socialization help learning to warm up to and make friends with people. Good thing he is food motivated.
By  Christelle L. Del Prete

Moped the chinchilla likes to spend a good portion of his days napping. He has all kinds of comfy nests in his enclosure where he can curl up to catch some z’s. But, as soon as he hears the crinkle of a treat bag, he’s all ears ― literally. With his eyes still closed, his big ears stand up like antennae. Then his nose and long whiskers start to twitch. Finally, Moped shakes himself awake and comes out to investigate.

It’s a good thing Moped is so food motivated. When he first arrived at Wild Friends, Best Friends’ state and federally licensed wildlife rehabilitation center, Scooter, the other chinchilla he’d come in with, was his best (and only) buddy. But Scooter had serious medical issues, which is why the pair ended up at the Sanctuary in the first place.

The Best Friends veterinary team was able to keep Scooter comfortable and happy enough to enjoy another year with her friend, Moped. But when Scooter passed away, Moped, who had rejected his caregivers’ friendship up to that point, found himself without a friend.

The two chinchillas had lived in a cage in the corner of a room for the first six years of their lives. Since they received very little attention from people, Moped was wary of them on his best days, and downright unfriendly on his worst, making a squeaky, barking noise and running to the opposite end of his enclosure whenever anyone opened the door.

But he was the only chinchilla at Wild Friends, and his domestic, herbivore counterparts at the Bunny House are all rabbits and guinea pigs. So, although Wild Friends caregivers knew it would be a long road, it was time to start socializing Moped, because, like it or not, the skittish chinchilla needed human companionship.

Socializing a shy chinchilla, like a shy dog or cat, takes time, patience, and lots of tasty treats. It also requires reasonable expectations. Caregivers were content to let Moped go at his own pace. They knew he wouldn’t become a lap pet right away, and that was OK. 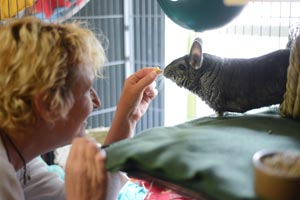 At first, Moped wouldn't take cookies from his caregivers at all. He wouldn’t even accept treats they set down and left for him. But, eventually, the temptation became too great and he decided to try them. Once that happened, caregivers began offering him cookies, first through the slats of his enclosure, and then with his door open. Now, months later, he will eat fruit and yogurt goodies right out of their hands. Sometimes he’ll even stick his nose out of his room to beg for them.

He may be a little too interested in his tasty snacks (Moped could stand to lose a little weight), but they've really helped him come out of his shell. As long as he can see that food rewards are forthcoming, he’ll allow his caregivers to scratch his head and ears. And he’s comfortable enough at Wild Friends to take an “exposed nap” ― one in which he sprawls out on the floor or on a ledge in his enclosure rather than curling up in a hidey hole where no one can see him.

Although Moped isn’t ready to cuddle yet, his social circle has grown by leaps and bounds. He’s now a much happier chinchilla.

Read another story about Moped and more fascinating chinchilla facts.