When it comes to learning, there’s a big difference between when a student truly understands the concepts and when they simply parrot back all the right answers. And Fiona the horse, well, she became awfully good at parroting.

Fiona came to Best Friends a year ago from a terrible hoarding situation. Many of these horses were nervous around people, but Fiona took things to a new level. "She was terrified of the human hand," explains Best Friends equine trainer and caregiver Linda Alvey. "You couldn’t touch her, period." 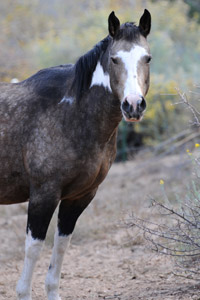 Caregivers and trainers started off slowly with Fiona, not wanting to stress her out by moving too quickly. Fiona is not merely bashful, but truly, terribly shy. "She is so extreme," Linda says.

Horse staffers focused on the relationship first, and training second. In time, slowly but surely, Fiona began to learn the Parelli training games, the horse training method of choice at Best Friends. These games are all about building a relationship with the horse, as well as helping the horse gain confidence.

While Fiona learned how to do what was asked of her in the games, there was one problem. She wasn’t enjoying herself. Fiona simply didn’t engage. "I got to a point where I wasn’t making progress (with her)," says Linda. In truth, Fiona didn’t even want to play the games in the first place.

Linda decided it was time to back off and look at the big picture again. Here was a horse who could do all that was asked of her, but she wasn’t happy doing it. She also wasn’t gaining much confidence.

After giving it some serious thought, and doing quite a bit of advanced study into horse behavior, Linda realized the root of the problem might be that Fiona wasn’t asking questions of her own during the process. "I started paying really close attention to every little move she made," Linda says. Then, she began requiring Fiona to ask questions.

Here’s an example. One of the games is called the circle game. In it, Linda backs the horse up with cues and then sends her to run in a circle. Fiona nailed this concept a long time ago. However, Linda added a new element to where she wouldn’t send Fiona into the circle run until Fiona actually looked at her and asked. In other words, more back-and-forth. "We’re having a conversation, because she’s asking," Linda says.

And yet, a horse as shy as Fiona doesn’t always want to ask. She’s more prone to look away and hide inside her own little world. Linda has stood there waiting for up to 20 minutes, on occasion, before Fiona could work up the courage to look and ask. "Sometimes it seems like it can take forever," she says. 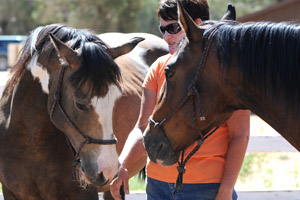 However, this new approach has made a big difference. Fiona’s confidence has increased, now that she sees how the conversation process can truly work. Fiona even lowers her head to Linda for haltering, which was unheard of before. "It’s helped our relationship a lot," says Linda. "Now she’s more of a partner." Fiona is realizing she really can trust people.

In her years at Best Friends, Linda has made amazing progress with horses of all different personalities and backgrounds. Yet Fiona still stretched Linda’s understanding and helped her learn more about how to connect with an exceptionally shy horse. "This is a never-ending learning journey," says Linda.

Sometimes it’s not only the student who walks away with a greater understanding.