This past summer, concerned citizens across the country were intently focused on Watertown, an enclave halfway between Madison and Milwaukee, Wisconsin. The city became the center of attention when the City Council, while trying to introduce safety measures regarding companion animals, included breed-discriminatory language in legislation.

"They wanted to address public safety, but wound up with language that would have effectively put a ban on pit bull terriers by deeming them all 'vicious,' regardless of demeanor, and placing restrictions on ownership," says Laura (Lola) Handzel, Best Friends legislative lawyer.

When Sean Van Derel, board member of the Watertown Humane Society, heard about the proposed language in the legislation, his reaction was, "No way, not on my watch. Not in this city. Not with the impact it would have on our shelter." When the time came for it to be voted on, he knew he had to take a stand. A few days before the meeting, he connected with Kathy Pobloskie (director of Wisconsin Voters for Companion Animals and Lost Dogs of Wisconsin), and they realized they needed to go to the City Council meeting.

"I had never been to a city council meeting before, let alone speaking up and challenging their legislation," confides Sean. "It was easy to see that the alderman proposing the bill was forcing the topic on the other elected officials. I have followed breed-discriminatory legislation (BDL) for quite some time and knew how real it was and the impact it would have. I also knew the officials likely had little idea about the topic, but wanted to pass it on emotion due to dog bites. Little did they know, it does nothing to prevent dog bites, and that's scientifically proven."

Kathy echoed Sean's reaction when she first heard about the BDL in Watertown: "When I first heard that Watertown was considering breed-discriminatory legislation, I was alarmed and extremely disappointed. Unfortunately, in Watertown, our first attempts to present logical solutions did not succeed." In fact, the City Council voted through a breed-discriminatory version of the ordinance by a 5-4 vote. 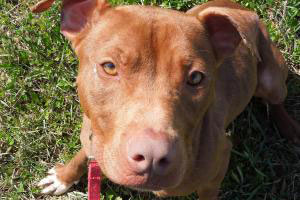 Wisconsin Voters for Companion Animals worked with Watertown residents Laurie and Greg Hoffmann and Becky Burg who were instrumental in reversing the ruling. They also rallied supporters via Facebook and other media outlets. "I was thrilled when Best Friends put out an action alert, says Kathy. "The Capwiz system makes it easy for people to participate and contact their legislators. We were able to quickly share and generate action. The Watertown Council said they received hundreds of emails from Wisconsin citizens expressing their displeasure with the possibility of BDL."

Sean was very impressed with the professionalism and united front the public presented. "From a 5-4 vote one way to a 6-3 vote completely opposite in just about two-week time frame seems incredible to me. One alderman stated that he received 500+ emails on the topic alone," Sean says.

Lacey, a four-year-old pup, could have easily fallen victim to the breed-discriminatory language in Watertown had the ordinance been passed as first written. She was rescued by Watertown Humane Society as a malnourished stray. Her personality is sweet and loving, and she's perfect for a family. "The alderman's stereotypical ideas about pit bull terriers couldn't have been more opposite of what Lacey is, though. Lacey is a lap dog - extremely affectionate and very loving around children and other animals. She is not inherently dangerous, and she is a pit bull terrier. Needless to say, Lacey may have spent her entire life at our shelter," shares Sean.

Thanks to the updated ruling and repeal of the BDL language in Watertown, Lacey is now a cherished member of a wonderful family.

Sign up to receive our legislative alerts by joining Best Friends Legislative Action Center. Stand up. Speak out. Save Them All. Together, we can make a difference.

For more information on how you can help pit bull terriers, go to our pit bull initiatives page.