In addition to Best Friends’ efforts on the ground in New Orleans and in the rescue camp in Tylertown, Mississippi, the Sanctuary took in 145 canine Katrina survivors in the days, months and years following the unprecedented disaster.

Many of those dogs have since been adopted, including Yogi, who just recently found a home, but we’re still caring today for some of the animals who survived the storm.

For a few weeks, we’ll share updates on some of the pets who call Best Friends home, to let people know how they’re doing 10 years after their lives were turned upside down.

Hummer the Chow Chow, a survivor of Hurricane Katrina 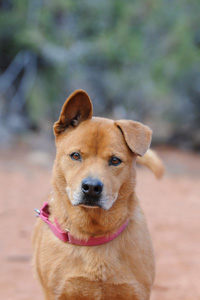 Hummer has always liked people — on his own terms, anyway. He’ll happily greet Dogtown caregivers with a full-body wiggle, and he gets excited when meeting new friends. But when it’s time for hands-on medical treatment or grooming, Hummer has typically said, “No way.” He’d carried that one terrible fear with him since the storm, and it would take years to undo.

In his younger days, Hummer got so agitated whenever anyone tried to handle him that he’d have to wear a muzzle every time he went to the Best Friends Animal Clinic. And, when he first started going for grooming sessions with Dogtown groomer Wendy Burgoyne, he wouldn’t even let her take his collar off.

But Hummer is 12 now, and over the years he’s formed strong bonds with people at the Sanctuary. One of those people is Wendy herself. Hummer never showed any aggression toward her, Wendy explains. But he was so terrified at first that he would scream when she tried to touch him. Yet, like any dog, Hummer needed some grooming to stay healthy and comfortable. Because his luxurious chow chow fur is so thick, it could easily get matted, and his feet would hurt if his toenails grew too long.

The way she could most help Hummer, Wendy thought, was to be his friend first. So she worked on that before her grooming goals. Wendy started bringing Hummer to the Dogtown grooming center with her just for fun. There, she would give him treats, but not touch him or try to handle him. Once he was comfortable with the room, and with her, he finally let her guide him into the grooming sink. After a soothing bath, Hummer realized that it felt pretty good to be clean and to have his thick fur combed out.

Many grooming sessions later, Hummer now lets Wendy trim his toenails and clean his ears with ease. He’s even OK with getting vaccines at the Best Friends Animal Clinic, as long as Wendy is there to help him. Best of all: He’s starting to trust other people now, too.

For the past year, Hummer has been a special guest in the office of Best Friends accountant Martina Schilling. When Martina picks him up in the morning, he greets her with his deep, happy bark. Then he rolls on his back for pets and belly rubs. 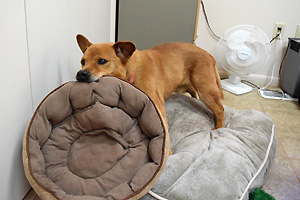 Though Hummer has always had a lot of energy, he’s mellowed with age. And just getting comfortable in the office has made a big difference, too. During his first few office visits, Hummer paced back and forth nervously the whole time. “I was so excited when he laid down for the first time,” Martina says. Now, Hummer is content to lie quietly on the floor, watching the comings and goings in the hall. It has become a peaceful, people-watching experience for him.

Hummer still bears some scars from Katrina. He looks for food constantly, even though he’s always served regular meals in Dogtown. He’s also getting older, and has had two knee surgeries, so he can't do things like jump up into the car anymore. But today he’s willing to let people lift him into the car, because after all the years of patient and loving care, he knows he doesn’t need to be afraid.

To bring hope and healing to more animals like Hummer, consider a making a gift.