The instant anyone approaches Landon’s run, the adorable three-year-old chocolate Lab mix looks to see who it is, then dashes over to a cache of toys he’s stockpiled under a tree. Intelligent and playful, Landon has chosen a special toy for each of his caregivers, which he picks up and prances around happily with when that person enters his run. The young dog’s high spirits and good humor really are a testament to how far he’s come since arriving at Best Friends this past May. 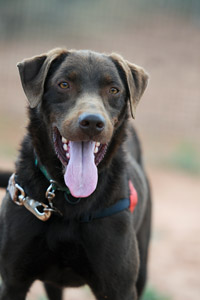 Found as a stray in Los Angeles, Landon ended up in a municipal shelter there. But he was lucky: The shelter was operated by Los Angeles Animal Services (LAAS), and thus is a part of the No-Kill Los Angeles (NKLA) Coalition, a Best Friends–led group and campaign aimed at making Los Angeles a no-kill city by 2017.

Landon came to the Sanctuary because he suffered from a variety of symptoms. He had quite a bit of hair loss, was extremely underweight, and generally did not feel well. After a barrage of tests and exploratory surgery, Landon was diagnosed with chronic active hepatitis, an inflammation of the liver. Though there is no cure for this disease, the inflammation can be decreased with medication and supplements. Thus far, Landon is responding very well to that treatment, which will continue for the rest of his life.

And the better he feels, the more curious and outgoing he becomes. He’s even decided to make himself useful by helping his caregivers with housekeeping tasks. One day, while caregiver Erin Schmitz was doing some weeding in his run, Landon watched her intently, coming over occasionally to sniff and check everything out. After watching for a while, he figured out exactly what needed to be done. Each time Erin pulled a weed, Landon pulled one too. 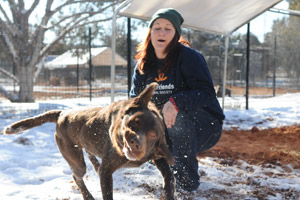 Once his run was weed-free, Landon moved on to larger excavation projects. From time to time, desert sand tends to accumulate in doorways, and the caregivers have to dig it away. Landon knew he was up for this task, and now whenever people are working in his run, he can be found digging right alongside them.

Landon’s industriousness is due in part to the fact that he really wants to help. But he also wants to be near people all the time. And they want to be near him too. After all, he is the dog that caregivers refer to as “endearing,” “adorable,” “a great little guy,” and “very special.”

Though Landon currently lives alone in his run (he is afraid of other dogs and sometimes a little defensive around them), it seems likely that with time and patience, he’ll branch out and make some doggie friends. After all, he’s already won over all the humans in his life. All he needs now is a quiet, low-key home where he can keep on flourishing.

Get more information on Landon and other adoptable dogs at the Sanctuary.

Get more information on NKLA.