Strut Your Mutt in NYC brings out the pet lovers 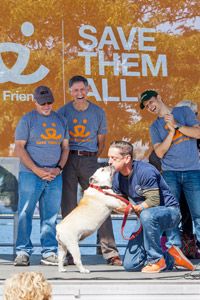 On September 28, the sun beamed down on Hudson River Park's Pier 84 in Manhattan, as nearly 1,600 participants readied to start walking with their forever companions and foster charges. Their smiles outshone any shining star. This was the fourth annual Best Friends Animal Society's Strut Your Mutt in New York City, the premier local fundraiser that brings together pet lovers to raise money and awareness for almost three dozen No More Homeless Pets Network partners (animal welfare rescues and organizations that have a similar no-kill philosophy as Best Friends). The event raised over a quarter million dollars for animals in need.

The day's big winner was Long Island Bulldog Rescue (LIBR) which received the Golden Bone Award for highest fundraising dog pack, with over $32,000 raised for their nonprofit. They doubled down on the award front - their top fundraiser, Eric Lee, won the Golden Collar Award for most money raised by an individual.

Laurette Richin, founder of LIBR, is thrilled with the results: "I'm so very proud of our volunteers. This event was great. Bulldogs inspire a tremendous amount of dedication and love. Bulldogs are such wonderful animals, but they have a lot of medical issues. Unethical breeders are creating dogs that require expensive care. Our veterinary bills were $227,000 last year alone."

LIBR had 74 strutting participants, which is fantastic for dogs like Bentley, who was rescued after he took a bad fall and ultimately needed three surgeries for his leg. His previous owners waited a few days before seeking medical treatment and dumped him, probably because of the cost of his care, which has totaled over $10,000. "We don't turn away any animal because of financial reasons and this event helps offset those costs," says Laurette.

Upcycling to give back 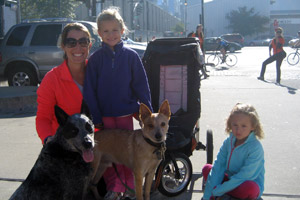 Courtney Rhein strutted with her children, Syndey and Sophie, alongside their dogs, Biscuit and Walter. They were there because of Glad Dogs Nation (GDN), a company run by Marianne Ahern, which uses their profits to spay and neuter services. GDN is dedicated to helping reduce the number of animals entering the shelter system via another progressive idea - upcycling children's stuffed animals into dog toys. Marianne refurbishes the toys so they are safe for pets. The toys also predominately display spay and neuter stitches. GDN had a booth at the event, and Courtney was so excited to get to meet Marianne for the first time, as one of Courtney's dogs, Walter, was actually rescued by Marianne literally minutes before he was going to be killed in a shelter. Walter is an Australian cattle dog, and Marianne has been rescuing them for almost 10 years.

"In my years dedicated to animal welfare, I've fostered 90 dogs, but I saw even with everything I was doing it wasn't stopping the number of animals entering the shelters," says Marianne. "Our booth here at the Strut Your Mutt is a great way to increase our visibility and connect with our animal welfare community. And I can't wait to meet Courtney and see Walter."

The day's other big winners included the Pup Scouts of DP Family Troop 4 who won the Golden Mutt Award, and the Golden Biscuit Award went to Bark & Co., the highest bread winner of the company packs. "Our whole company is based on saving animals, and this event epitomizes why we do what we do," says Carly Strife of Bark & Co.

Everyone was a winner thanks to our sponsors: MINI of Manhattan, BarkBox, Natural Balance, Petco Foundation and Petfinder.com.

Stay informed about the latest lifesaving events from Best Friends.