The Best Friends Strut Your Mutt concept has really taken off from coast to coast. Last year, we expanded the lifesaving fundraiser dog walk event beyond Salt Lake City, Los Angeles and New York to Austin, Texas; Baltimore, Maryland; Jacksonville, Florida; Portland, Oregon; Lafayette, Louisiana; and St. Louis, Missouri. (And this year, we added two new cities: San Francisco and Houston, Texas.) Here are details from two of the cities that hosted the event the second time around this year. 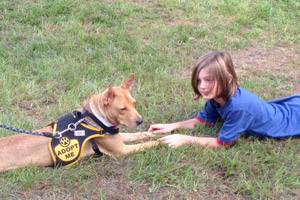 Strut Your Mutt in Jacksonville had more than 1,000 participants and raised more than $113,000 to help animals in need, including over $92,000 for our No More Homeless Pets Network partners of the Gulf Coast and beyond. For their contribution to the Jacksonville event, we'd like to thank our sponsors: Natural Balance, Petfinder, BarkBox and Yelp.

The strut came together under the guidance of Dione Garnand, event director, and Sandy Golding, logistics chair, who were instrumental in making it a success in its sophomore year. Although the event went smoothly, when lifesaving is on the line, everyone wants it to be the best. "I started to panic a bit when the goal was doubled from $50,000 to $100,000, but I knew that Jacksonville would pull out all of the stops to help us reach our goal," says Dione. And they did!

Jacksonville Animal Care and Protective Services (JACPS) volunteer Mary Ellen Kastelic was excited to learn that she could walk a shelter dog at the event and brought a sweet dog with warm brown eyes named Cajun. At the start of the event, Mary Ellen was concerned that Cajun might be too jittery to participate in the walk, so she decided they would attend the event but not be part of the big crowd. So Cajun, who was wearing her "adopt me" vest, and Mary Ellen went to where the vendor booths were. The striking-looking dog soon had people vying to meet her. One couple came by three times wanting to get to know her.

"I gave them instructions on how they could adopt her via JACPS," explains Mary Ellen. "By the end of the event, I knew she would not be going back to the shelter - that I would foster her. As I walked to my car, I got a message from the shelter that someone was interested in adopting her." The couple decided they could not live without Cajun, now named Ginger.

"To me, Strut Your Mutt means hope and a second chance for our community's homeless pets," Mary Ellen says.

Strut Your Mutt in Austin raised over $105,000 for homeless pets, and the day's big winner was Shadow Cats. They won the Golden Bone Award by raising over $29,000 (the most out of any Austin group).

"It's our biggest fundraiser of the year," says Sheila Smith, founder of Shadow Cats. "We are able to use the reach of Best Friends to promote our cause and to attract more supporters to our mission. In the end, this means we are able to help more cats." Sheila says they did better this year because last year they got a late start due to the fact that they thought the event was just for dogs. The extra funding from this event allows them to pull more cats with feline leukemia and other at-risk cats from shelters. 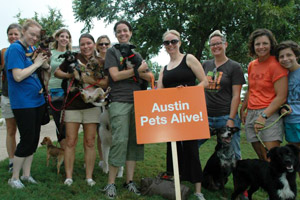 Hilary Bentley of Austin Pets Alive (APA) feels the event allows for more than a financial boon: "Strut Your Mutt is not only a fundraiser but instrumental in maintaining productive relationships with the community, networking with other rescues and local businesses, and working towards national awareness of no-kill."

The group was so successful last year in fundraising that they replicated their efforts this year. Last year's funds topped $30,000, and with some of the money they were able to help a dog named Copper, who came to them a victim of extreme neglect. Copper exemplifies the types of animals they take in. They don't discriminate against animals who are more costly to care for due to medical issues. "We love taking part in the event each year and are so grateful for our continued relationship with Best Friends," says Hilary. "It makes us feel positive and energized to come together with like-minded organizations with a common goal."

The Austin event was as fun as it was profitable for animals in need, thanks in part to sponsors MINI of Austin, Natural Balance, Petfinder, BarkBox, Walgreens, and Yelp.

Best Friends holds events year-round, and we have resources to empower you to hold an event to raise money and awareness to help homeless pets. Click here for more information.